Fall, 2014 — Yamaha Motor Canada introduced today the latest iteration of the most popular four-stroke 150-horsepower outboard of all time – the 2.7-litre F150. Like its predecessor, the new F150B has 16 valves and the sophisticated, proven design that has become its signature. With the improvements, the F150B now offers even better reliability, easier fishing, quieter operation and an improved appearance.

“The F150 is a proven platform that continues to be in high demand due to its reliability, performance and customer satisfaction,” says Yamaha Motor Canada’s National Manager Marine, Jean Francois Rioux. “With these updates, the F150 will continue to be a staple in the Yamaha outboard line.”

The F150B has an eight-tooth “dog clutch,” which replaces the previous six-tooth version for smoother, trouble-free shifting and excellent reliability. The new F150 also has internal machining and metallurgical improvements that include stronger, better valve guides and valve seats. 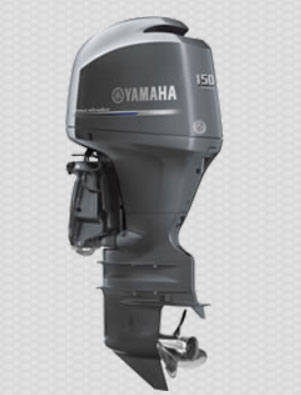 The F150B isalsonow compatible withYamaha’s variable trolling RPM switch (VTS), which allows anglers to adjust the trolling speed in 50-RPM increments from 650 to900 RPM using a Yamaha Command Link® gauge. The result is a better overall fishing experience for anglers.

The F150B also has an improved appearance thanks to a new lighter composite cowling that covers new powerhead cladding (manifold, oil and alternator covers), which is designed to reduce the interference between the cowling and powerhead during service. A new bottom cowling and apron also create a sleeker, less bulky profile.

To see the entire lineup of Yamaha Outboards, visit www.yamaha-motor.ca .

This entry was posted on Tuesday, November 25th, 2014 at 10:37 am and is filed under News. You can follow any responses to this entry through the RSS 2.0 feed. You can leave a response, or trackback from your own site.