The owner of one of Western Canada’s biggest fishing and outdoor sports retail chains has announced an ‘orderly wind down’ of the business.

The United Farmers of Alberta Co-operative (UFA) says that all of its 12 Wholesale Sports outlets based in four Western Canadian provinces will close on December 28th following the inventory liquidation process. The sales began last week.

“This was an all-inclusive business decision that, while difficult, was made in the best interests of the UFA on behalf of its members,” said Carol Kitchen, UFA President and CEO.

“There were numerous external factors that led to this decision including an increasingly competitive environment, the continued shift to online purchases and an overall slowing of consumer discretionary spending as a whole, including the outdoor industry.

“The orderly wind down of Wholesale Sports will allow UFA to focus on its core business of agriculture and petroleum,” added Kitchen. “We thoroughly appreciate the loyalty of both our customers and Wholesale Sports employees and wish to sincerely thank them for their support and service over the years.”

The rise of large scale competitors, such as Bass Pro Shops and Cabela’s, has affected Wholesale Sports bottom line, explained Kitchen. “Those players were not in the marketplace in 2008,” she told a local Winnipeg newspaper. “Wholesale Sports was considered a pretty big player at that time in the markets it operated in. Over the years we have seen Bass Pro and Cabela’s basically build their footprint over the top of ours – it’s tough to compete in those markets.”

Wholesale Sport, which employs around 454 workers, was bought by UFA in 2008. 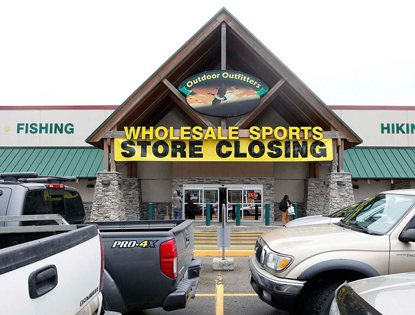 This entry was posted on Tuesday, September 26th, 2017 at 10:00 am and is filed under News. You can follow any responses to this entry through the RSS 2.0 feed. You can leave a response, or trackback from your own site.