What a difference a day makes!

Aaron Shirley, Mulligan and I decided to head back out yesterday and when we arrived at one of our favorite Lake Ontario tributaries we were both did a double-take.  The water had dropped about 8″ and it was almost clear? OK, re-strategize. This is where spring steelheading in the Great Lakes tributaries get’s fun and very challenging!

Most of the deeper runs and smaller pools now were shallow run and even smaller pools with NO FISH.  That’s right most of the fish that were there the day before are now either in the lower stretches of the tributary, way below  were we planned to fish, or already in Lake Ontairo! First stratagey, go to the 13′ Rapala R-Type Drift Rods, that way we can be further back off the banks to make our drifts.  Second strategy, bait up with smaller, natural colored egg-sacks, downsize the Gamakatsu Octopus hook! 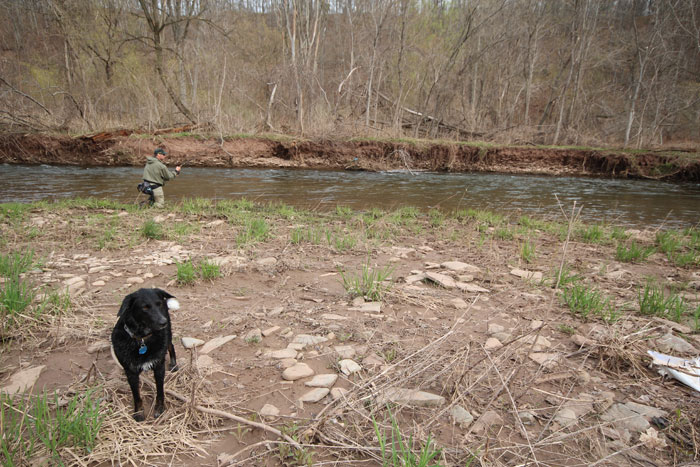 Third strategy to take under consideration, approach any likely fishing spots with stealth.  You can see Aaron in the above image on his knees, trying to keep a low profile and way up-stream from the run in intends to fish.  Even as I walked up and saw where he was drifting I diverted from walking the stream & went back about 50 yds from the shore to get behind him to take this image.

This short run produced the first steelhead. It was a 2yr old male steelhead that was still looking for some spawning action in the upper stretches of the tributary! You can see the clear water conditions just in front of the fish.

Taking the above clear-water “strategies” into consideration produced big results as you can see from Aaron’s first steelhead!

This fish nailed my egg-sack in a run that I thought was “marginal” for holding a drop-back steelhead.  If a stretch of water even looks like it has a 40% chance of holding a fish, fish it! In my case, it payed-off!