Upgrade to the latest Raymarine OS and Sonar tech

eS and gS Systems updated to LightHouse 3 can now connect to RealVision 3D enabled MFDs or the new RVX1000 module.​

LightHouse 3 for eS and gS Series allows these MFDs to integrate with Axiom, Axiom Pro and RVX1000. This helm has a mix of gS195 and Axiom 12RV displays seamlessly sharing all of their data, cameras and sensors.

LightHouse 3 is the powerful operating system behind Raymarine’s new-generation Axiom and Axiom Pro multi-function displays. Owners of Raymarine’s popular eS and gS Series multi-function display systems currently running LightHouse 2 can now upgrade to LightHouse 3 with a fast and free software update. Simply download the update from Raymarine.com to any microSD memory card, insert it into your display, and you’ll be running the latest technology in minutes.

LightHouse 3 is fast, fluid and easy to learn. The operating system’s streamlined design brings your most commonly used features forward with a menu system that is simple and intuitive. Easily customised to your style of boating, fishing or cruising, LightHouse 3 offers bold and simple home screen icons that are easily customised with just a few touches.

Based on the same powerful sonar technology found in Axiom Pro RVX, the RVX1000 is a black-box sonar with CHIRP DownVision, CHIRP SideVision, High CHIRP, RealVision 3D and 1kW CHIRP sonar capabilities. Connect your transducers, plug RVX1000 into your eS or gS network with a Raynet network cable, and you’re ready to see the underwater world in amazing RealVision 3D.

RVX1000 has dual transducer connections. Simply plug in any RV100 or RV200 series transducer to enable RealVision 3D sonar. RVX1000 is also equipped with a second transducer port for 1kW CHIRP sonar and supports a wide selection of CHIRP and non-CHIRP transducers from Airmar Technology. RVX1000’s 1kW sonar transmits in the CHIRP low, medium and high bands, as well as traditional 50/200 kHz mode.

RVX1000 is an all-in-one solution that offers a traditional sonar display for detecting gamefish, baitfish and structure in depths from two to 4,000 feet, while also depicting the underwater world with stunning RealVision3D, DownVision and SideVision imagery. RVX1000 has its own onboard quad-core processor and extensive built-in memory to ensure a fast and seamless experience. It’s the ultimate sonar tool for fishermen, divers and explorers everywhere. 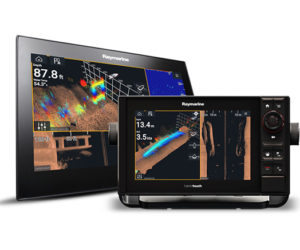 This entry was posted on Saturday, June 9th, 2018 at 10:00 am and is filed under News. You can follow any responses to this entry through the RSS 2.0 feed. Both comments and pings are currently closed.