My good friend Bill Selby (aka Rainbow Chaser), loves to steelhead fish and in recent years has really caught the “bug” (pardon the pun), to fly-tie patters which he almost exclusively fished for steelhed all season long. I am going to be featuring 4-Bill Selby flies over the next 4-weeks which should inspire you to fish nymphs for steelhead when trout opening day comes around!

This is the first creation which I will show for those of you that know the effectiveness of drifting nymphs under a float. Take notice of the hook-eye location near the middle of the fly. This enables the fly to hang “perpendicular” on the line to the bottom which produces a tantalizing swimming action as it drifts with the current. Bill uses a special epoxy for the head to make it tapered and living rubber legs to add to it’s movement.

If you use flies under a float for steelhead, and you tie your own flies, I would encourage you to mimic some of Bill’s patterns…they work especially well…thanks Bill! 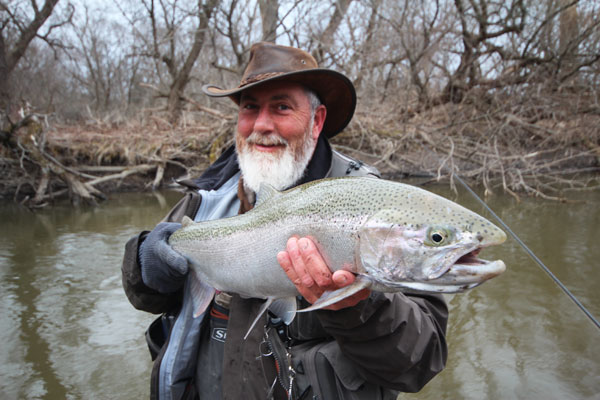