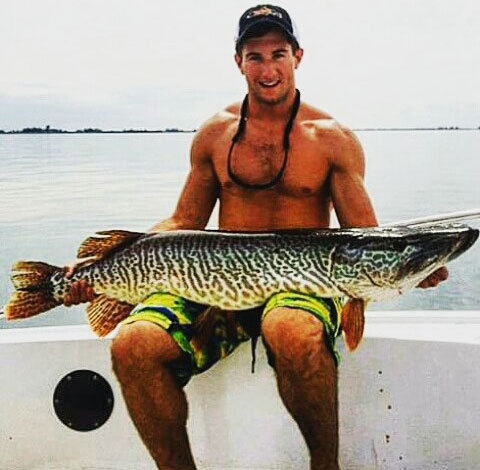 Johnny Sinnott sent us another beautiful tiger musky image that was caught in Lake St. Clair, ON.  This is Ryan Farley making his second appearance in their “Musky Marathon”.  He and friend and fellow fishing partner Nolan Flynn were trolling a crank bait on Lake St Clair when they crossed paths with a near 44 inch tiger musky! Now for those of you that arent up on your “esox etiquette” alow us to elaborate… a tiger musky is the merger of genetics between a pike and musky the hybrid result often bears a variation of displays in brilliant metallic green blue and silver tones, they hold zebra like vertical bars through out the length of their body have a fast growth rate and are known to be aggresive predators. Now our whole Pro team is from St Clair and weve never seen anything like this…we sent this to some of the most prominent musky guides that fish this lake regularly and their reactions were the same absolutely GORGEOUS. The boys probed the MNR to see what their take was on this amazing musky and they said to their knowledge it is among the largest verified tiger muskies caught and released on lake St Clair. A rare trophy and beautiful fish ! Be sure to check us out on Instagram and social media @truenorthanglinginc !
News

This entry was posted on Saturday, August 8th, 2015 at 10:00 am and is filed under News. You can follow any responses to this entry through the RSS 2.0 feed. You can leave a response, or trackback from your own site.