I had the opportunity to fish with our good friend James Beauprie on Lake Simcoe, ON yesterday for some deep-water, fall smallmouth using crankbaits in water up to 40′ deep.  The conditions turned out to be very challenging with strong westerly winds & rain. Since we had booked yesterday as a shoot-day for one of our TV shows, we still headed out, even in tough conditions. We started by trolling a variety of crankbaits that are designed to dive to 20′, but using 300-400′ of 10 lb. Sufix 832 braid equipped with a Sufix Fluorocarbon leader, we were able to make the same lures dive to over 40′! 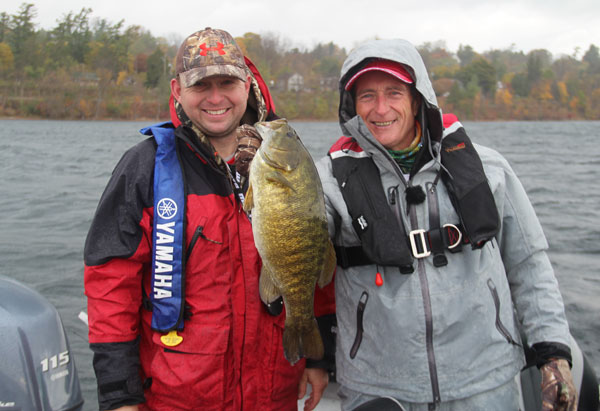 I fished the Rapala Trolls To 20′ Minnow & Shad, Dives To 20′ and the Down Deep. I ended up hooking the first trophy smallmouth, but lost the next two. My biggest upset was having a big smallmouth break my line shortly after the hit. My top producing Rapala was the Trolls To 20′ Minnow in the purple back/silver sides! 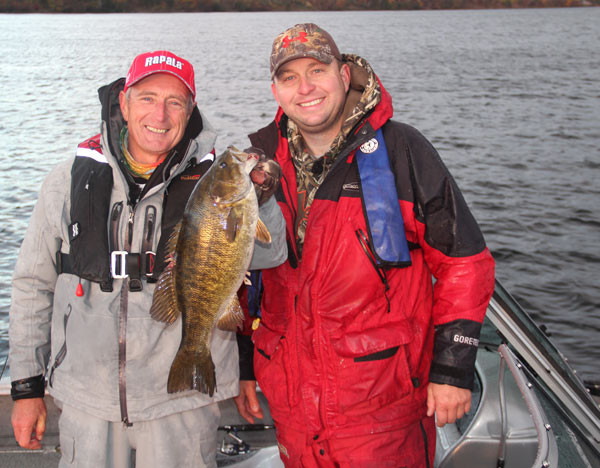 Even though the weather made it difficult for boat control, we were still able to troll effectively using the Minn Kota 80 lb. thrust Terrova at around 2 mph. The Humminbird sonar kept us fishing the contour line and showed us where the smallies were holding.  Make sure to catch all the action and great fall bass and pike fishing tips when this episode appears in the new Canadian Sportfishing series starting next January on television and on our Italo Labignan YouTube channel!