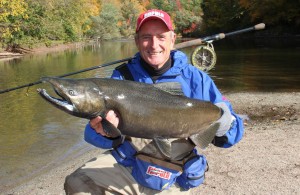 In the Great Lakes tributaries the Chinook runs are reaching their peak. Thousands of anglers are converging on all the streams to either catch them for sport, to collect their valuable eggs and the fish. Catching Chinooks when they are in the tributaries can be challenging, especially as they turn darker in color and get close to the end of their life-cycle. Here some of my strategies to catch them consistently.

One of the keys to choosing the right presentation to catch tributary Chinook Salmon is based much on the location you find them. Salmon that have been in the tributary for the least amount of time will be easier to make strike. The longer a salmon is in the river, the tougher it is to catch. Try and fish the lower sections of tributaries (harbor mouths, first rapids and pools) for the freshest-run fish. Chinooks further up-stream and especially moving on and off spawning beds will spook easy and will be more difficult to catch.

Versatility is key here. While many anglers drift-fish for tributary Chinooks, there are many times when they will not take a drifted bait (roe bag, skeened salmon eggs, plastic worms, imitation salmon eggs, etc.). This usually happens when they are spooked and preoccupied with spawning. Drifting works well if the water is turbid from rain especially drifting in deeper runs where Chinooks are holding in “transition'” in-between pools and eventually spawning. When salmon show no interest in drift-baits it’s time to aggravate them with artificial lures into striking.

Fish runs or pools drifting baits first. When salmon shut down switch to casting spinner, and wobbling lures that have erratic action, bright colors and even are equipped with rattles. Present the artificials to the fish from different directions mostly passing in front of them with the current, and than swimming them away from the fish. You will see if a salmon shows interest by following. If it follows, there’s a good chance it will strike on the next well presented cast. 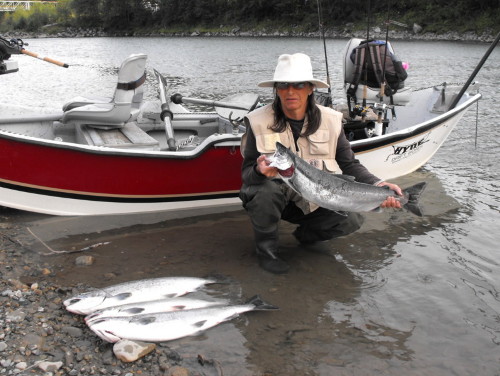