A Striped Pikecarp caught by angling in the 15 kg (33 lb) size is one of the largest recorded. Little information exist on this rare giant with a growth potential of over 2 metres. The last remaining habitat is the deep jungle of Laos. It occurs in some Mekong tributaries, but has never been found in the Mekong mainstream. The Nam Theun population of Luciocyprinus striolatus is one of the few robust populations of giant cyprinids in the world. River Guides from Thailand “discovered” this powerful predator on an initial exploratory trip at the Laos/Vietnam border in a National Park. The species is listed as endangered on the IUCN Red List, threatened by dam building. For natives it’s just a big fish with a lot of meat. Sportfishing (Ecotourism) can change the awareness. (As reported in www.fishing-worldrecords.com ) 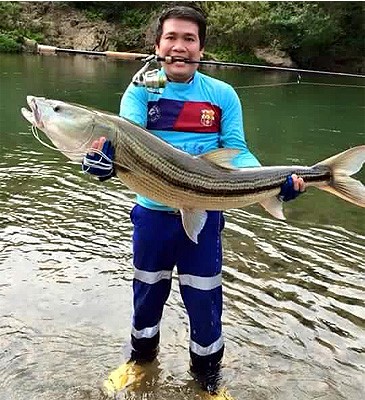 This entry was posted on Monday, January 16th, 2017 at 10:30 am and is filed under News. You can follow any responses to this entry through the RSS 2.0 feed. You can leave a response, or trackback from your own site.