The search for northern gold.

The Search for Northern Gold

The passion started as a young boy. Something about the outdoors fascinated me. The thrill of adventure always seemed to excite me, and this next outing was no different. I was returning to Kapuskasing On, a place I had once stepped foot before. I had been successful here in the past with large pike and bass, however came up short of “Northern Gold”.

Gazing from the plane window at 23,000 feet, city streets had become dirt roads. Rushing traffic had become flowing water and high rises had become miles of towering birch and cedar. It was clear I was close to my destination. Greeted by my dad at the airport I could see he had the same look in his eyes. It was a look I had seen before. My dad and I were both determined to not just spend quality time together but to capture and hold a prize I had been chasing for years, even if it was only for seconds.

Day one we unfortunately experienced problems with our boat motor. We had some bad weather with constant down pours and cold and continuously dropping temperatures. We spent days trying to prepare the vessel for a break in the weather. To no prevail our boat was no longer sea worthy. For a minute I thought my chances were slowly diminishing. I prepared myself for disappointment. My Dad understanding I had come hundreds of miles remained calm and assertive. “were there’s a will there’s a way” he exclaimed.  I walked with my dad to the back of his property where he had a small canoe. “The Manaqua”, He said.  My dad doing whatever it may take to assure me I had a genuine shot, we prepared it for voyage.  Equipped with a small trolling motor we headed out into the back woods. 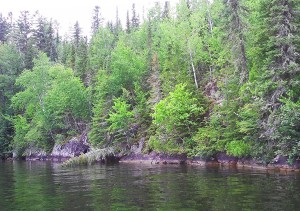 There was a break in the weather finally, as we approached a clearing in the woods I could see the Kapuskasing River ahead. It was as beautiful as i remembered.  Everything about the place seemed magical. The way the sun shimmered upon the water’s surface. The trees and rock that lined its shores, and the eagles that flew high above in the sky.

We made our way to a back bay with a small island with some incredible structure and weed beds. We were confident we were in a good location. Although we have had success fishing all times of the day for walleye, we knew the large walleye we were after would typically be laid down in cover, waiting for the evening to feed, or simply waiting for the food to come to them.  We took this into consideration and did just that.

I rigged up with a black and white leech imitation jig and began back drifting from the bay into the river. I could feel it was a soft shallow bottom with a sudden drop based on the way the jig felt as it bounced along. It only took minutes to hook up with a fish. It was a gorgeous 3 pound walleye. It was a taste of what we were after, however not quite the monster we were looking for. We remained optimistic that we were in the right area. We continued to work the same area and repeated the same technique. As the jig dropped from the shelf of the weeds I felt a large tug and I knew it was a decent fish! Briefly it came across my mind that I had a large pike. The flash of yellow and glowing eyes changed that thought rather quickly. 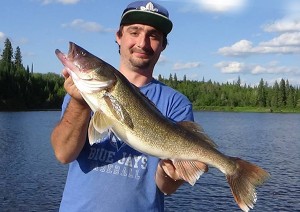 After a great fight and managing to keep the canoe balanced from tipping, my dad had the fish in the net. We looked at each other in disbelief. It was perfect from the tips of its tail 26 and a half inches to the tip of its fine sharp teeth. I had struck gold, 7lbs of it. The happiness I felt was simply indescribable. I had caught my trophy.

As I headed back to shore for some photos many thoughts crossed my mind.  Generations of my family had accomplished what I just had. My grandfather, my dad and now myself. I was overwhelmed with emotions. I learned a life lesson that day and realized the reward of catching that fish was doing it with my dad and seeing how proud of me he was. I will treasure that moment for the rest of my life. 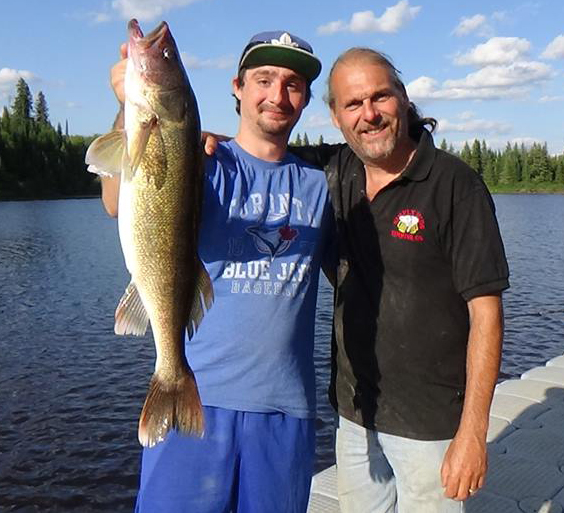 This entry was posted on Monday, September 4th, 2017 at 10:00 am and is filed under News. You can follow any responses to this entry through the RSS 2.0 feed. You can leave a response, or trackback from your own site.