Charles Patchen (13) from Alabama caught a 63.8-pound flathead catfish on the Chattahoochee River in Jackson County at 2:30 p.m. on May 15. He beat the previous certified state record by more than eight pounds.

Patchen had reluctantly agreed to go bream fishing Sunday afternoon with his mother and stepfather, Jeanette and Bryan Atwell. After landing his state-record flathead catfish, he was certainly glad he went!

When the bream suddenly stopped biting after a successful morning, Patchen’s stepfather suggested there might be a larger fish lurking in the water scaring off the bream. So they switched from baiting with minnows to a bluegill they had caught. After the second time his bait was hit, Patchen set the hook. He assumed it was hung up on something underwater, so he asked his stepfather for help.

“I grabbed the pole from him, gave it a couple tugs and the fish took off,” said Atwell. “I handed the pole back to Charles and said, ‘GET ‘EM!’”

Patchen fought the catfish hooked on his Zebco 33 with 14-pound test line for nearly two hours while Atwell guided their boat with his trolling motor, following the fish in hopes of tiring it out. The monster flathead catfish eventually gave up the fight and Patchen reeled it in. After the fish flipped over, Atwell had to roll it into their boat because it was too large for their net.

“I was so tired after reeling it in that I fell back into the boat to rest,” said Patchen, the newly awarded state-record holder for flathead catfish. “But I’m glad my mom made me go fishing that day because now I am the catfish master!”

Atwell is well versed in Florida outdoor recreation and conservation, as his father Grady Atwell was a longtime Game and Fresh Water Fish Commission conservation officer. He was quick to point out that he is passing on the tradition, stating, “All I can say is carry a kid fishing.”

FWC Biologist Katie Woodside met with the self-titled ‘catfish master’ and his family the next day to get an official certified weight and measurements and to have the application notarized. The official measurements were 48.03 inches in total length, with a girth of 35.43 inches.

“Charles’ flathead catfish is a great catch to add to our state records — and caught on a 14-pound test line, by a 13-year-old at that! Just one more reason why Florida is the ‘Fishing Capital of the World,’” said Tom Champeau, director of the Division of Freshwater Fisheries Management.

The previous certified state record flathead catfish weighed 55.05 pounds and was caught on the Yellow River by James Auston Jr. in 2011.

State records require a biologist to verify the species and have a certified weight for the notarized application. The FWC maintains records for 33 freshwater species. Other state records can be seen at MyFWC.com/Fishing (select Freshwater and then State Record Fish).

Patchen will receive a state-record certificate and online recognition on the FWC website, along with qualifying his first Big Catch towards becoming a catfish specialist or master angler. Big Catch is a long standing, family-friendly angler recognition program that awards anglers a certificate if they qualify after submitting a photo of their catch online and if the catch exceeds specified weights or lengths. For more information about the Big Catch program, go to BigCatchFlorida.com. For an adult, any flathead over 25 pounds or longer than 36 inches qualifies, and for youth (under 16 years old), 18.75 pounds or 27 inches long qualify for a certificate.

If you are ready for some big fish and good eating, flatheads abound in the Chattahoochee, Escambia, Apalachicola and other big panhandle rivers. 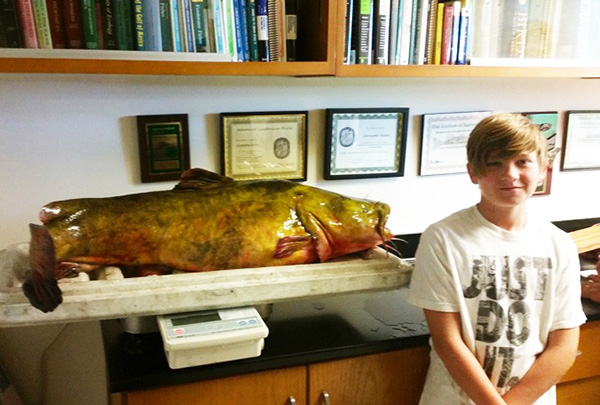 This entry was posted on Thursday, May 26th, 2016 at 10:00 am and is filed under News. You can follow any responses to this entry through the RSS 2.0 feed. You can leave a response, or trackback from your own site.