PULASKI, N.Y. – A ‘State of Lake Ontario’ meeting Tuesday night attracted more than 100 charter boat captains, anglers and other interested persons who wanted to hear from state Department of Environmental Conservation staff and others about how the lake’s fishery fared last year. The nearly 3-hour meeting, last in a series of meetings about the lake hosted by the DEC in recent weeks, covered a wide variety of topics, ranging from an analysis of last year’s fishing season to a new approach the DEC is using to help it determine fishing regulations and other actions on the lake and its tributaries.

“It was a record year,” said Steven LaPan, the DEC’s Great Lakes Fisheries Section Head. Lapan and others cited data obtained from a fishing boat survey conducted by DEC staff last year along the lake’s south shore from the Lower Niagara River to Henderson Harbor from April 15 to Sept. 30. The most sought-after fish species in the lake are Chinook salmon, brown trout, rainbow trout and coho salmon,

According Mike Connerton, a DEC aquatic biologist at the Cape Vincent fishery station, the DEC, charter boat fishing quality (catch rate = number of fish caught per hour of angling) for fish increased by 25 percent from 2017 to the highest level on record, mostly due to the record high Chinook catch rates and good brown trout fishing.

Record catches for chinooks were recorded by charter boats and others surveyed in May, June, July, August and September. The majority of fish caught were two- to three-year-old fish. However, their length and “plumbness” were slightly smaller than previous years, likely due to declining numbers of their primary food source (alewife) in the lake, Connerton said.

Brown trout fishing was “excellent” in April and May (the second best recorded) and above average July through August.

Meanwhile, fishing success for coho salmon was average overall, while success for rainbows and lake trout in the lake declined for various reasons – among those was the possible preoccupation by anglers with the good Chinook fishing. Bass fishing success picked up from previous years, but was still relatively down from record highs of years ago.

A recent statewide angler survey estimated that more than 2.6 million angler days were spent on Lake Ontario and its major tributaries, with the estimated value of the fisheries exceeding $112 million annually for local economies.

Update on stocking: The big news on this front continues to be that Chinook salmon stocking this year in will be reduced again by 20 percent (it was cut by 20 percent last year), due to less than desired, estimated numbers of adult alewife from two, year classes (2013 and 2014). That conclusion is supported by numerous bottom trawling surveys from boats on both the U.S. and Canadian sides of the lake conducted by U.S. Geological Survey and Canadian fisheries staff.

However, DEC officials pointed out at the meeting that combined salmon and trout stocking in the lake by the DEC this year will still exceed 2.7 million fish and that “these numbers do not consider wild Chinook salmon production and increased survival of pen-reared Chinook salmon. DEC biologists and fisheries managers are optimistic that excellent fishing will continue.” 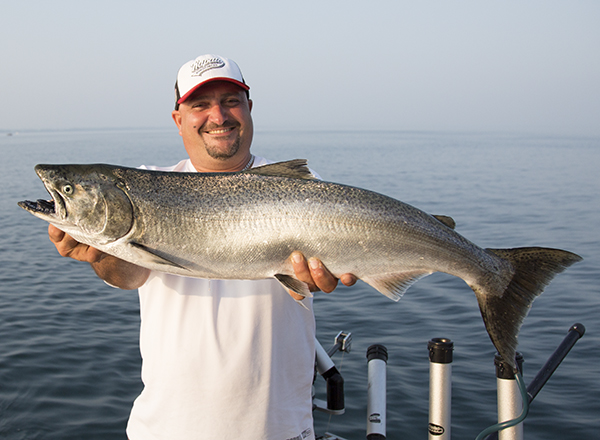