They say muskellunge are the fish of ten thousand casts – a fitting moniker for a fish that’s pretty difficult to catch. But rearing them is almost just as difficult, something the DNR has learned through trial and error over the years.

The annual procedure for rearing these gamefish begins with collecting eggs and milt each spring from Great Lakes muskellunge that live in the Detroit River. Hundreds of thousands of eggs are collected with the goal of having 30,000 to 40,000 fingerlings that can be stocked in waterbodies located throughout the state the following fall. But it’s all of those months in between when the most difficult work occurs. 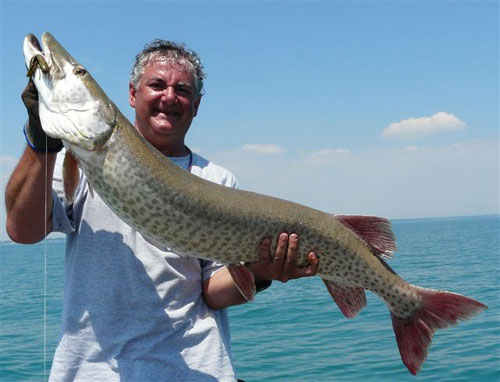 “We begin rearing the fish indoors,” said Matt Hughes, a fisheries biologist at the Wolf Lake State Fish Hatchery who oversees the department’s muskellunge rearing program. “For the first two months of their lives we keep them inside and they are raised on a commercial pelleted diet. On average it takes about 10 man-hours each day to care for them.”

Once they reach three to four inches in size (usually by mid-August) they are moved out into the rearing ponds also located on the property where they will start to eat live minnows.

Hughes explains that because of the high potential for cannibalism among muskellunge, the fish have to be graded and moved in batches based on size – otherwise they will take every opportunity to eat each other. “If they’re moved as a group when they’re all the same size, we reduce the amount of cannibalism.”

Once the muskies are in the ponds staff must closely monitor temperature, oxygen levels and how much food is available. The fish are in the ponds for roughly 80 days – growing on average .05 inches each day. By the end of their time in the ponds they’ve gained another four to five inches in length.

While in ponds there is still some cannibalism occurring. As opportunistic feeders muskellunge will seek out anything that looks worthwhile. Once stocked, their preferred diet is soft rayed fish.

“Muskies can take down another fish of their own species at about 70 percent of their own length,” Hughes said. “Since they’re kind of snake-like it’s very easy for them to take down a large meal.”

As the fall months arrive stocking decisions are made to determine where these Great Lakes muskellunge will end up. Waterbodies with good natural reproduction will not receive fish – which includes the spot where they came from – the Detroit River.

All Great Lakes muskellunge the DNR stocks come from Wolf Lake State Fish Hatchery – but they travel to all corners of the state – which often requires a multi-day journey to get them there.

“Let’s say we’re taking fish to the western U.P. We typically harvest the fish the day before they need to leave and they will be held in the stocking trucks with oxygen and freshwater going in,” he explained. “The driver will get on the road early the following morning and drive non-stop to Thompson State Fish Hatchery in Manistique where they’ll spend the night. This drive often takes 8 hours. Then that next day they’ll be delivered to their final destination.”

As you can imagine, this amount of time on a truck can be pretty stressful for the fish. Facility upgrades planned for Thompson State Fish Hatchery should do away with such two-day trips. Upgrades at Thompson include the construction of several new ponds where muskie will be reared. Once these ponds are on-line, stocking locations in the U.P. and northern Lower Peninsula will receive muskie reared at Thompson. This will greatly reduce the stress on these fish and should improve overall survival.

Hughes shared that over the last few years indoor upgrades at Wolf Lake – including the installation of a new, high-efficiency boiler – essentially doubled the amount of heated water that’s available. The new boiler allows the facility to make 72-degree water – the ideal temperature to reduce cannibalization. This increase in heated water has allowed the addition of more rearing tanks thus providing the ability to decrease rearing densities in each tank. Additionally, increased water flows have been achieved which keeps tanks cleaner. Both of these changes reduce stress on the fish and ultimately decrease the potential for diseases.

“We still would like to be able to rear more fish,” said Hughes. “But right now our limiting factor is space. With the number of lined ponds that we currently have at Wolf Lake, we are maxed out on our muskie rearing capability.”

Ideally additional enhancements would be made at Wolf Lake in the future to address this issue, including construction of a new coolwater incubation and rearing facility and 10 half-acre ponds on the property.

The impact of the DNR’s muskellunge rearing program has been felt near and far as reports following initial stockings have been positive. If you’d like to learn more about where the DNR stocks Great Lakes muskellunge, visit the fish stocking website at Michigandnr.com/fishstock/.

This entry was posted on Monday, October 17th, 2016 at 1:27 pm and is filed under News. You can follow any responses to this entry through the RSS 2.0 feed. You can leave a response, or trackback from your own site.