Record Steelhead from Skenna River, BC. 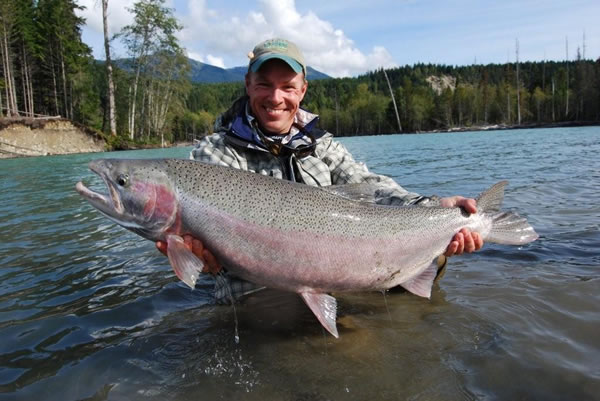 Steelhead Fishing Trips 2015. The Spring run steelhead have begin their migration from April until the middle of May and head over to their spawning grounds. They’ll also spend the winter preparing and feeding in the ocean so they can finally spawn in April and then return to the Ocean. These fish are not only well conditioned, but also quite strong, chrome and fat. In fact, the moment they get on your hook they’ll go ballistic. Compared to other Steelheads out there, they’re undoubtedly the stronger ones.

Yet as an experienced and even novice fisherman, you’ll probably be more excited knowing that the Skeena River hods the record not only for the largest steelhead (36 lbs), but also the largest Coho salmon (25 lbs) as well. On top of that, it also holds the world record for the largest Chinook salmon, weighing a massive 92.5 lbs.

If you would like to book a guided fishing trip with Tracey, you can contact him at, Kitimat Lodge, BC.

This entry was posted on Sunday, April 12th, 2015 at 6:47 pm and is filed under News. You can follow any responses to this entry through the RSS 2.0 feed. You can leave a response, or trackback from your own site.