↑ Raymarine Marketing Director, Jim Hands, says that it has received an ‘overwhelming’ response to Axiom on social media.

↑ As well as launching Axiom at the Miami International Boat Show, Raymarine also unveiled a new look and logo.

The first shipments of Raymarine’s award-winning Axiom Multi-Functional Display (MFD) units have already been delivered and the company fully expects to start fulfilling all orders for the product by the end of the month.

Marketing Director Jim Hands reported that that dealer anticipation is high for the MFD, which was the star of this year’s Miami International Boat Show when it won the Innovation Award following its launch in the U.S. That coincided with its European introduction in Helsinki, Finland.

“We have received very heathy feedback and enjoyed an overwhelming response on social media,” Hands told Angling International. “Photo and smartphone videos have been creating a lot of awareness. Recently a video demonstration posted by a pro ambassador in Australia attracted more than 2,300 comments and, following its introduction in Miami, it got almost one million impressions.

“Consumers have described their delight at the phenomenal value of Lighthouse 3D and having all four sonars in one transducer. The ‘all-in-one-box’ package has really hit a chord – and it is a sentiment that has been echoed by retailers, who also believe that the price point will be a game changer.”

Visitors to this year’s Bassmaster Classic Expo also gave the product the big thumbs-up when it was shown to consumers for the very first time. “The Axiom is expected to be especially popular in the saltwater sector, but we also have big plans for it in the freshwater market in 2017 and that journey brought us to Houston, Texas, because we believe its application in the bass market will be extremely important.

“I am pleased to say that those who visited our booth were blown away. They loved the amount of technology, the easy set-up and the fact that it is a very inclusive system.”

Hands added that along with a strong reception in North America, Raymarine is also excited to deliver Axiom to anglers in the Nordic region, Italy, France and other healthy sport fishing locations across the globe.

He revealed that Raymarine is also looking at the carp market in the Netherlands and Belgium. “We have seen the emergence of carp fishermen who are prepared to spend money on their sport and equipment. The Axiom certainly offers them something different.”

Coinciding with the launch of Axiom in Miami, Raymarine revealed a new brand image for the company which includes a revised logo, icon and tagline – ‘Simply Superior’. Hands explained that the subtle new look embodies Raymarine’s commitment to innovation and the creation of world-leading electronics. 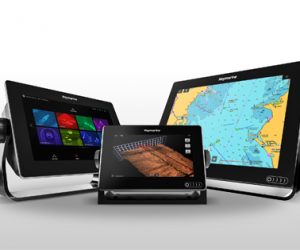 This entry was posted on Saturday, May 6th, 2017 at 11:00 am and is filed under News. You can follow any responses to this entry through the RSS 2.0 feed. You can leave a response, or trackback from your own site.