Raymarine says that its new Dragonfly 7 PRO is its most feature-rich sonar/GPS yet for fresh and saltwater fishing. Offering the same advanced features as the award-winning Dragonfly 5 PRO, it is equipped with an extra-large seven-inch display for maximum visibility.  It is also optically-bonded for all-weather performance and is guaranteed to never fog up. The Wilsonville, Oregon-based company adds that, unlike conventional imaging sonars that transmit each pulse at a single frequency, the Dragonfly 7 PRO’s DownVision™ sonar uses wide spectrum CHIRP technology to transmit across multiple sonar frequencies simultaneously. As a result it produces higher resolution, photo-like sonar images. “The Dragonfly 7 PRO surpasses ordinary imaging sonars with superior deep water performance to 600ft (180m) and reliable high speed bottom tracking,” says Raymarine. “It is also equipped with a conventional high frequency CHIRP sonar channel for targeting fish and bottom tracking down to 900ft (277m). 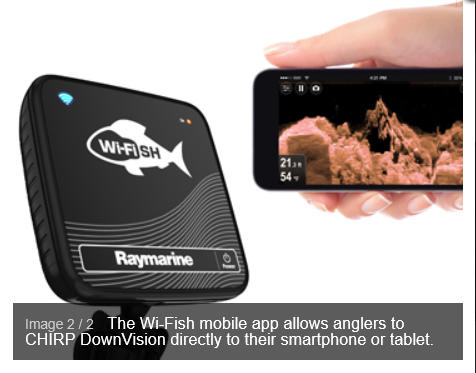 “The unit’s fast acquisition 10Hz GPS sensor and mapping helps users stay on course, while the Wi-Fish™ mobile app lets them stream CHIRP DownVision directly to their smartphone or tablet. It also syncs with the Navionics Boating app to give anglers the power to create their own personal HD bathymetry maps in real time using Dragonfly’s CHIRP sonar.” Dragonfly 7 PRO supports Navionics’ charts, C-MAP by Jeppesen and Raymarine LightHouse charts and comes bundled with C-MAP Essentials or Navionics+ maps on microSD.
News 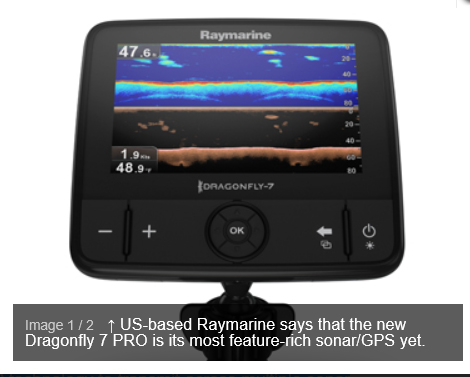 This entry was posted on Tuesday, February 9th, 2016 at 10:00 am and is filed under News. You can follow any responses to this entry through the RSS 2.0 feed. You can leave a response, or trackback from your own site.