Raymarine, the FLIR Systems brand and headline sponsor of the Luremasters fishing tournament in the Netherlands, has seen a dramatic increase in entries for this year’s event,

As one of the world’s most prominent supplier of fish finding technology, Raymarine is a firm advocate of tournaments such as Luremasters and its role as title sponsor demonstrates its continued commitment to this popular sport.

The three-lake Luremasters tournament has grown from 15 teams to 60 in just one year, a clear indication of the demand for an event like this in Europe. Following the success of its inaugural event in last year, Luremasters 2017 will take place between September 14th and 17th. The teams will compete over three days on the lakes of Haringvliet, Hollands Diep and Volkerak.

Located on the Dutch Delta in south-west Netherlands, which is famous for its natural beauty and a magnet for fishermen, the area’s expansive lakes are widely regarded as one of the last strongholds for large predatory fish. Perch, zander and pike are prevalent and are the three species that competitors will need to catch for points.

Gregoire Outters, Vice President and General Manager of FLIR Maritime said, “Raymarine’s commitment to the sport of predator fishing is well known. As headline sponsor of Luremasters, our objective is to appeal to fishermen of all levels, from grassroots to the more competitive. Once again, the organisers have kept the format simple and the entry fees low to encourage entrants of all abilities to participate.”

As an open event with an entry fee of just €350 per team, Luremasters is a fishing competition for everyone. With just a few places left, the organizers are urging anyone wishing to enter to do so as soon as possible by clicking here.

(as reported in Angling International Aug.9, 2017) 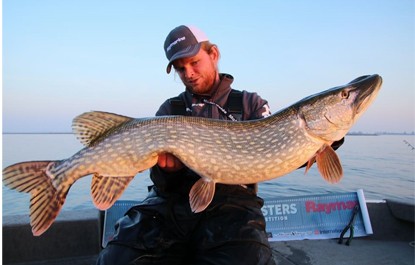 This entry was posted on Wednesday, August 16th, 2017 at 10:00 am and is filed under News. You can follow any responses to this entry through the RSS 2.0 feed. You can leave a response, or trackback from your own site.