Hi ItaloYou seem qualified to anwser this, my question is in Ontario how does the law work in regards to fishing in areas when a certain species is closed. For example fishing for suckers in a closed trout stream or fishing for pike when bass are closed. If i was clearly fishing for suckers with a panfish rod and little peice of worm or for pike with a big spoon could a conservation officer say i had the potenial to hook a trout/bass or is it ok? Not looking for official advice ofcourse but wondering what you have heard in the community. Thanks

Hi Jack, good question that needs common sense to apply the answer. You can be fishing waters for fish that have an open season even if there are species of fish there that are still closed. Good example would be fishing opening day for walleye in the Kawartha’s, but Bass and Musky are still closed. This also applies for fishing rivers and streams. If you hook a fish that the season is not open yet it should not be taken out of the water and should be released immediately (no pictures taken). If you catch more than one fish that is out of season you should release it immediately and move to another area and not keep fishing the same area and hook more fish that are out of season. Best not to fish areas where you have a chance of catching fish that are out of season, even if you release them. Under the Ontario Fish & Game Act a Conservation Officer action is “implied” and the legislation uses the word “will” as opposed to “may”. Example, if you get pulled over for a speeding ticket a Regional or Provincial Police Officer “may” give you a ticket. In the case of a Conservation Officer seeing you catch and release several fish that are out of season in his legislation “will” charge you with the offence. Caution and common sense goes a long way. Remember the closed season for species is to protect them so that we continue to have a good fishery….God bless you. 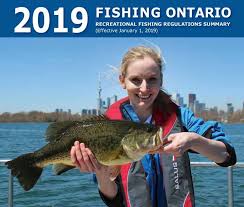