Hi Italo, since the weather has been nice I’ve been going after some winter river steelhead and have been noticing that they have been going after big streamer style flies. Can you recommend a type of steelhead fly that works best under float gear. I was thinking intruder type fly what do you think ? Thanks in advance take care.

Hi Daniel, sounds like you are fishing big-rivers where introduced Steelhead-strain, Great Lakes migratory browns and Lake Trout are feeding on baitfish. That’s were drifting streamers from a boat or from shore with a 3-way bottom rig or under a float work well. Some of the best streamers to use have a thin body profile that looks like the profile of a smelt or emerald shiner. Pete’s Bait & Tackle in St. Catharine’s sells many of these which are custom tied for them that anglers use this time of the year in the Niagara Region for all the fish species above. I have found that the most effective streamer to use under a float is one that hangs “horizontally” (not down), as it’s being drifted. Some of these have been available from Bass Pro and sold as “jig-flies”. They are in-fact flies that are tied on a jig-hook, where a metal or plastic fly-bead is attached ahead of the hook so that it kind of looks like a jig, but it’s a fly and hangs horizontally under the float. That way, if you move the float it produces a tantalizing horizontal swimming action that trout and steelhead can’t resist. The feature image shows ones that I use with great success through float drifting through the winter months. 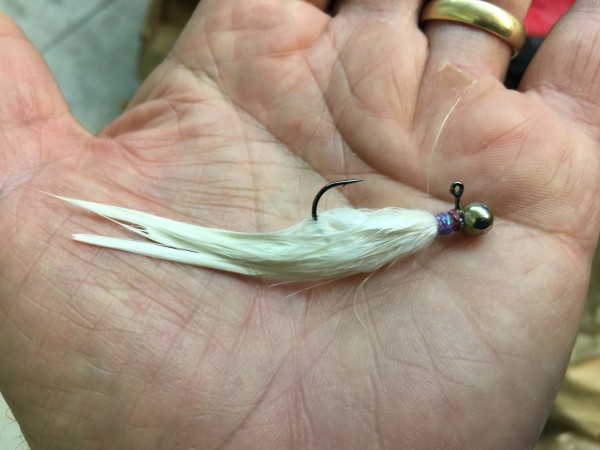