Hello Italo :)I fish for chinook salmon in Duffins creek and I have found in the last 3 years, Im having trouble getting salmon to chase lures that caught them in the past! Too often I end up snagging them by accident or watch them move out of the way of any thing I use. Can you offer any tips on what I might be doing wrong?Love your show!Thanks….Mike.

Hi Mike, thank you for your kinds words, hope you keep enjoying the shows and tips. As you know, when Chinook salmon run up the tributaries they are only interested in one thing, “spawning”. As soon as they start turning a darker color (even in the harbor mouths), their body starts to “atrophy” (waste away, typically due to the degeneration of cells). God designed it this way so that the closer Chinook salmon get to spawning, the more intense the atrophy, to the point that you see part of their fins/tail disintegrate and mold start to form on wounds on their external body. After spawning Chinooks soon die and their flesh decomposes and provides natural nutrients to their offspring’s and the rest of aquatic life in the tributaries. Chinook stop feeding once they enter the tributaries, but anglers can still catch them by either fishing chunks of salmon eggs/roe bags, or lures that trigger strikes mostly out of aggression. Even though they stop feeding they will take roe and shiny lures due to “imprinting” ((learning occurring at a particular age or a particular life stage like remembering when they were small and competing for food in the tributary and consuming eggs from spawning fish, and also remembering their response to feeding on baitfish when they were eating their own body weight a week in the Great Lakes).

Here is what I suggest if you want to catch fish that strike your lure (not foul-hooked). Fish the lower sections of Duffin’s for Chinooks that have not spawned yet or reached their spawning grounds. Avoid fishing for Chinooks that you see in shallow pools and tail-out of pools that are either spawning or ready to spawn. The fresher fish holding in the deeper sections of the tributary will be less spooked and will be more likely to strike un-natural, noisy, erratic action lures like; KwikFish, Jointed Rapalas, Vibrax spinners, wobbling spoons, etc.  Some of the most exciting strikes are enjoyed by pier anglers casting lures before Chinooks even enter the tributary, so casting at the mouth of Duffin’s while the salmon are in the lake during the day, or at night with phosphorescent lures (glow-in-the-dark), works extremely well. 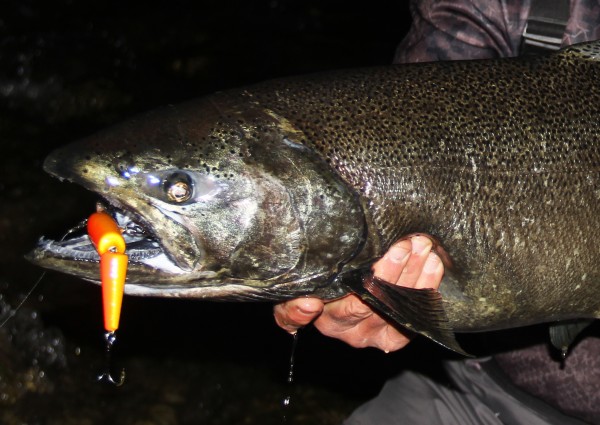