Some product launches just don’t catch fire, while others burn brightly for a time before fizzling out, never to be seen again. And then there’s a third much smaller category that continues to glow, blazing a trail across markets like an eternal flame.

These are the hot products that every manufacturer wants, says Christian Dibisch, Managing Director of German company World Fishing Tackle. And Dibisch should know. He launched KG Strong, a PE braid, 20 years ago, and despite many line launches since then it has been comfortably WFT’s best seller for four of the past five years.

Today it is sold in more countries than any other product in WFT’s expansive range of fishing lines. Says Dibisch: “We developed it for deep sea fishing in Norway where, because of the rocky coastline, anglers wanted a strong line that would not be weakened by abrasion.

“That is something quite difficult to achieve and we had to combine several technologies before getting it right. That is how it all started,” he recalls. “Frankly we did not put much effort behind it at the beginning. We didn’t know it would last. We spent no marketing money in the early years. We didn’t need to because anglers were talking about it so much.

“It was successful in Germany from day one. Then we began to get requests from other parts of Europe where anglers were fed up with breaking off on rocks or big fish. Even the owners of coastal holiday camps were ordering KG Strong because their customers were asking for it.”

Demand soon spread across western and central Europe and on into eastern countries, with particularly high demand from Russia. Then on to Asia, Africa, the Middle East, China and Australia, where customers of distributor Jarvis Walker have ‘gone crazy for it,’ says Dibisch. Indeed, so universal is the brand that Dibisch admits that while many anglers may not have heard of WFT they know all about KG Strong!

Some would argue that WFT could have reaped bigger rewards if it had invested more heavily. Dibisch disagrees. “The strength of the brand is that we built it slowly. Sometimes, letting a product make a natural progression is the best way. The foundations are stronger.

“A product that grows like this can be bigger than one that has millions spent on it. Our investment has been in maintaining high stock levels rather than marketing. It is not often that something like this happens, but when it does the product has a very long lifespan. Consumers buy them because they are good, not because they have been persuaded by expensive promotional campaigns. You can push a product very hard, but the moment you stop the fire goes out.”

The arrival of the speed jigging style around ten years ago provided a further boost to sales, with fans of the robust method finding KG Strong the ideal line for hauling big fish away from rocky sea-beds at super-fast speed. “The nature of speed jigging is that you cannot let the fish run or you will lose it,” says Dibisch. “So something has to give. Rods snap and even the strongest spinning reels have been known to break under the pressure before KG Strong.”

There are hundreds of items in the current range, including KG Exact, a clever idea allowing anglers to buy spooled lengths that fit certain WFT reels and avoid wastage. “The reason behind our success with KG Strong is simple. We have been able to supply a fishing line that doesn’t break,” says Dibisch.

And although the line has been improved over the years, Dibisch is wary of killing the goose. “If you want to improve an enduring product you have to be very sure about what you are doing. “With a product like this it is not always about making it better, but rather about making it better for the territory where it will be used. We always make sure that any change does not impact on the line’s other qualities. We have no intention of dousing the fire.”PE 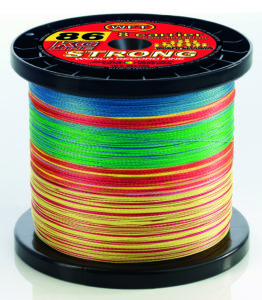