Expanded fishing closures and size restrictions are part of new actions announced by the federal government to protect threatened Fraser River chinook salmon. Terry Beech, parliamentary secretary to the fisheries minister, says large areas of the ocean near the mouth of the Fraser River will be closed to fishing and chinook that are more 80 centimetres long must be released. He says they’re taking the unprecedented action because of historic low populations of chinook salmon, which are the favoured food of endangered southern resident killer whales.

In a technical briefing with reporters on Friday afternoon, Fisheries staff said the population of killer whales is currently at 72 individuals. While there were two calves born last year, there was also a loss of three individuals, and another whale is missing.  Marine vessels are required to turn their engines to neutral idle within approach distance of southern resident killer whales. (Jonathan Hayward/Canadian Press) The ministry says it is focusing recovery measures on threats of contaminants, reduced prey availability, and acoustic and physical disturbance.  For marine vessels, that includes restrictions on fishing within 1,000 metres of killer whales and slowing down to seven knots or less when within 1,000 metres of killer whales.

Michael Crowe, centre, of Fisheries and Oceans Canada, and two members of the B.C. Wildfire Service place a salmon in a vessel being used to transport them up the Fraser River with a helicopter, past a massive rock slide near Big Bar, west of Clinton, B.C., on July 24, 2019. The rock slide has narrowed the river, creating a five-metre waterfall that is preventing many migrating salmon from getting through to spawning grounds.  Earlier this month, officials with Fisheries and Oceans Canada told a Commons committee that 99 per cent of early Stuart and 89 per cent of early chinook salmon were lost in 2019 because of the slide. They reported that about 60,000 fish were helped over the slide last year, while 220,000 made it past on their own once water volume dropped. Contract to clear B.C.’s Big Bar landslide balloons to $52.5M as crews’ race to allow for salmon migration Beech says of the 13 Fraser River chinook salmon populations, 12 are considered to be at risk. He says the latest chinook protection measures were developed following consultation with Indigenous communities, recreational and commercial fishing organizations, and environmental groups.

Decline in Chinook due to climate change, fishing

According to DFO reports, the declines in chinook salmon populations across B.C., Alaska, Washington and Oregon have been associated with “large-scale patterns of environmental change and increased environmental variability.” Those changes include rising water temperatures, pollution, deforestation, water extraction and extreme weather events. ‘Almost complete loss’ of early salmon runs at Fraser River slide last year: DFO Fisheries and Oceans estimates chinook productivity declined between 25 and 40 per cent since the early 1980s across many B.C. stocks.

The government says its new 2020 measures are aimed at reducing fishery moralities, but that some First Nations’ fisheries will continue to have priority access to salmon for food, social and ceremonial purposes. 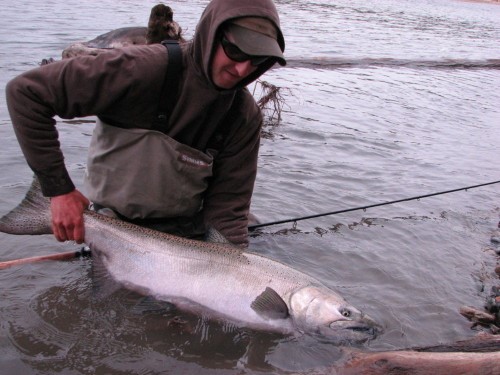 This entry was posted on Tuesday, June 23rd, 2020 at 10:00 am and is filed under News. You can follow any responses to this entry through the RSS 2.0 feed. Both comments and pings are currently closed.