Officials at Canada’s Department of Fisheries and Oceans are weighing in on a troublesome question.

Should they allow a healthy lake to be poisoned — even temporarily — to avert a potential disaster for the Miramichi River’s wild Atlantic salmon?

That question became urgent this fall with the discovery of dozens of smallmouth bass had appeared in Miramichi’s southwest branch.

The invasive species can quickly increase and turn to young salmon as a food supply. That’s a terrifying prospect for conservation groups working to protect the storied native salmon population.

It is believed the fish are escapees from nearby Miramichi Lake, a 300-hectare body of water near Napadogan. The first smallmouth appeared there in 2008.

The manual for the use of rotenone in fish management. (American Fisheries Society)

Continuous efforts to eradicate the bass over the past 10 years have failed.

New Brunswick’s salmon conservation groups and Miramichi area First Nations now speak as one on the need to use whatever means possible to end the smallmouth bass threat as soon as possible.

Their plan is to use rotenone to kill all the smallmouth bass in the lake. Rotenone is a natural substance, a powdered product made from the dried root of certain bean plants in equatorial regions.

It biodegrades in water, vanishing completely, depending on conditions, over a period of two weeks to 30 days or more.

CBC has obtained and reviewed several documents on rotenone use in New Brunswick and elsewhere, and purchased the operating manual used for applying it.

The book: Planning and Standard Operating Procedures for the Use of Rotenone in Fish Management, is co-authored by Brian Finlayson.

Finlayson is a rotenone expert based in California. He’s the author of a detailed 2017 plan for the use of the product in Miramichi Lake.

Taken together, the documents reveal the complexities involved in ridding the lake of smallmouth bass.

While its effect on the lake itself is temporary, rotenone is a poison, and Finlayson has no trouble with that word.

While his book describes the product’s effectiveness at quickly killing fish, it notes: “Rotenone is also acutely toxic to immature insects and frog tadpoles,” and was routinely used in the past as an insecticide.

“The aquatic invertebrates will come back, probably, I’m guessing, within a year,” he said.

Finlayson’s report on Miramichi Lake recommends rotenone be applied during September, a step that would mitigate some of the concerns on that front.

Under the plan, hundreds of the native fish would be captured in advance, placed in holding tanks, and returned afterwards to repopulate the lake.

The North Shore Micmac District Council is the lead agency on the rotenone application now being considered by DFO.

Chief George Ginnish, the board chair, said the alternative to treating the lake could be devastating to native Atlantic salmon.

“We’re very concerned the impacts these introduced fish can have on the Miramichi,” he said. “The salmon already have more than enough challenges with striped bass, climate change, at-sea predation and everything else.”

The Atlantic Salmon Federation has long advocated for the use of rotenone on Miramichi Lake.

“Our desire to do this is coming from the right place,” said spokesperson Neville Crabbe. “It’s a desire to preserve the Miramichi River for future generations.

Crabbe says rotenone is approved for use in Canada as a way to manage invasive species and applications like the one proposed for Miramichi Lake are done “several times a year in Canada in other provinces.”

“What we’ve learned from the experts is that the ecosystem bounces back, it bounces back quickly and perhaps even more vigorous than the pre-treatment state,” he said.

Worries about the plan

All are worried about the plan.

Sam Bell has spent summers on the lake for nearly 60 years. He said it is now used and enjoyed by his children and seven grandchildren.

“I never want to see it happen,” said Bell. “They had that Agent Orange. They thought it was alright and then years later they found out it wasn’t.”

In 2001, rotenone was employed to kill off the fish population on Despres Lake, also in the Miramichi watershed.

At just 16 hectares, Depres Lake is a fraction of the size of Miramichi Lake. It is also quite a bit shallower, with a mean depth of 1.3 metres.

The lake had been deliberately stocked with chain pickerel, another non-native species, that can be devastating to salmon.

It is believed the lake had previously had no naturally occurring fish populations.

A Department of Natural Resources report describes the impact.

“Within 30 minutes of initial application, three collection boats began netting dead and dying fish from the western quadrants,” it said.

No dead fish were observed in the stream below the lake. When the water in Despres Lake was tested 27 days later. rotenone levels had fallen by about 80 per cent to 0.018 parts per million.

It is believed the colder fall weather slowed the dissipation of the rotenone.

Peter Cronin, one of the provincial biologists involved in 2001, said rotenone at that level would no longer be lethal to “any fish species found in New Brunswick.”

No rotenone was detected in followup water tests in June 2002.

By Connell Smith reporter with CBC in Saint John 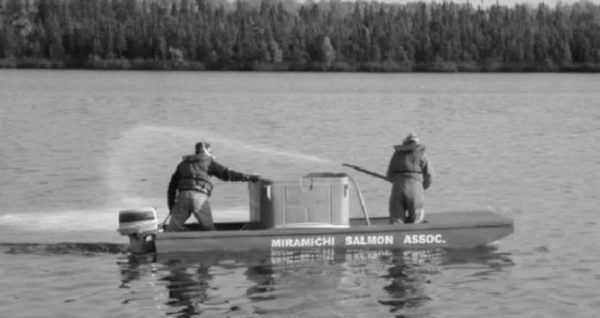