With the latest warm spell we had, I could not help but think of high stained rivers with fresh chrome steelhead. My thoughts were migrating toward northern Ontario tributaries for one last kick at the can before the deep freeze. After a few phone calls to friends and checking out river flow data, the destination was set into place and my good friend Tony would be making the trek with me. We were originally set to fish a certain trib I frequent, but I really wanted to fish new water. There are a few tribs that I have wanted to fish for well over 20 years, and after talking to a friend Mike, we changed our plans. Tony and I both set out on a steelhead journey to explore new waters we had never been to before. I absolutely love new adventures, from the road trip with friends, to not knowing what lies around the next corner on the river. I’m always like a kid on Christmas on these trips, full of excitement and eager to tear open the next gift.

We arrived to the lower end of the river to find beautiful stained green high water. It looked amazing! After many drifts with roe and no bites, we tried casting hardware without any luck either. We gave it our all for a couple of hours no no avail, and we didn’t see anyone else hook up either. I spoke with a few nice gentlemen on the river that informed me the fishing was slow this fall, a common theme everywhere. They said if you catch a few fish, that is a good day this season. We knew we had to move spots, and the decision process began. Should we move to a new river, or different part of the same river? The water looked to good not to explore further up river, and that is what we did. We found another access point, and that was an adventure on its own. We eventually made it down to the river and what we found was incredible. The river was picturesque with a breathtaking northern backdrop and vividly coloured water raging through pinch points. The high green water pushed around boulders, dropped into pools and rounded corners with high clay bank walls. it had rocky substrate and so much water to fish, steelhead could be anywhere! Like kids in a candy store, we set up our rods and began to explore, fishing almost every 30-feet down the river at a time.

The move paid off, and Tony and I both got into fresh chrome wild steelhead that put our tackle and agility to the test. These fish were hot and lively, jumping and cartwheeling around in pools. They would stop on a dime and come right back at you before tearing over to the main current forcing you to chase them down river. That heart-stopping fight is what I love about wild steelhead. We thoroughly enjoyed our day and getting into a bunch of fresh chrome steelhead each on a new trib was just what the doctor ordered. We got the steelhead in all types of spots like current seems, around boulders, the edge of breaks and even the middle of runs. It was a true steelhead paradise that I am glad I could enjoy with a good friend for the first time. 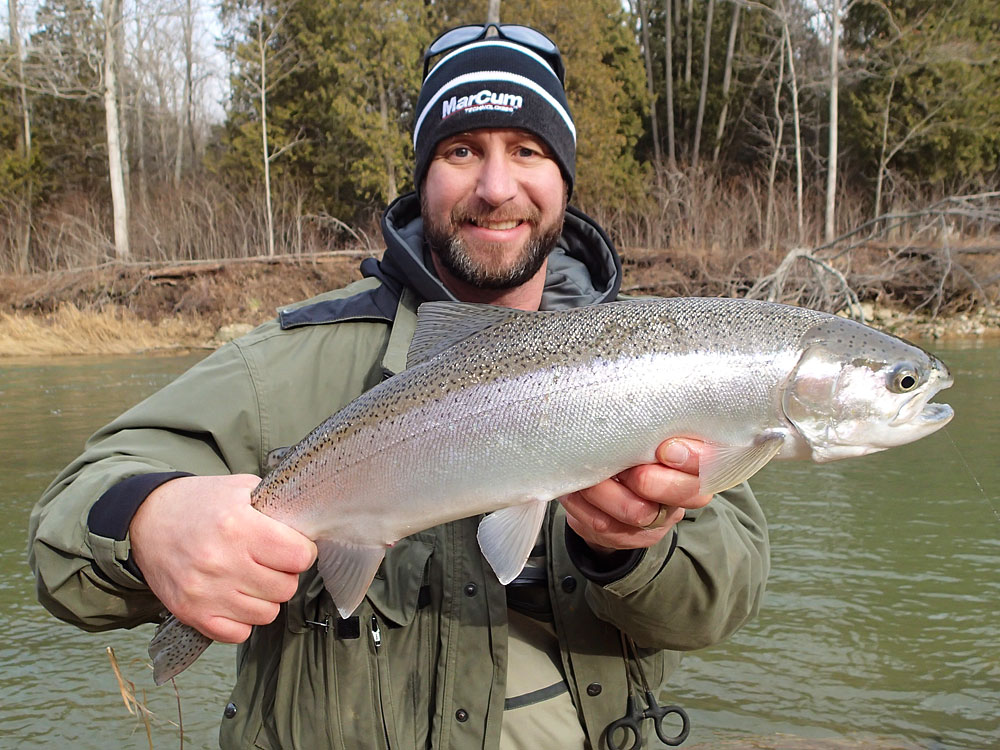 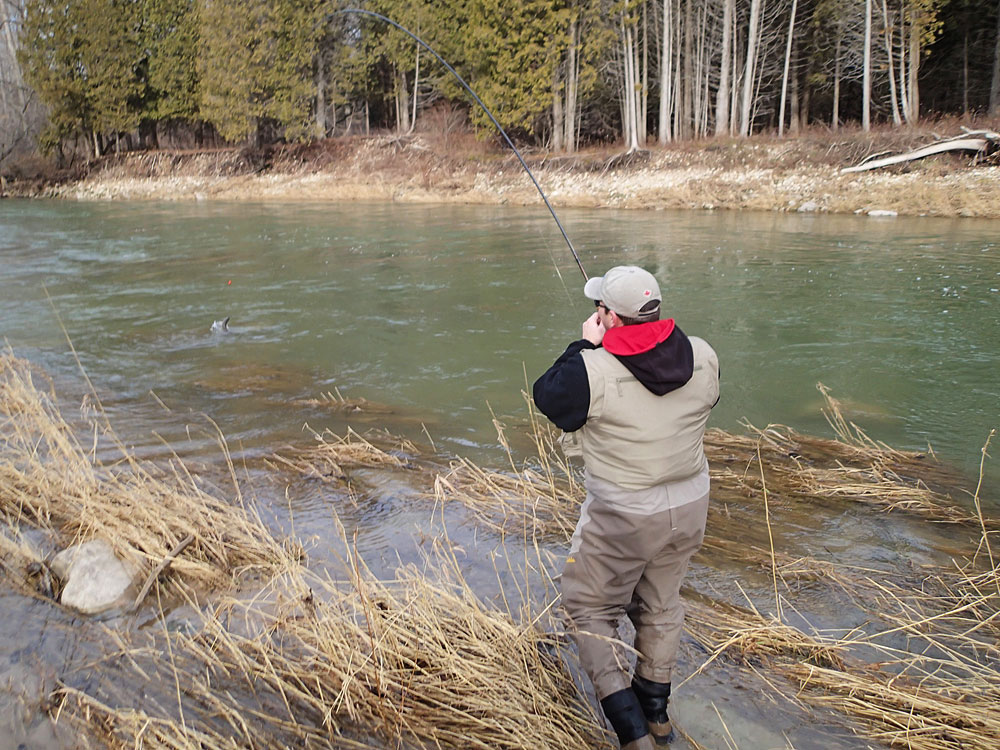 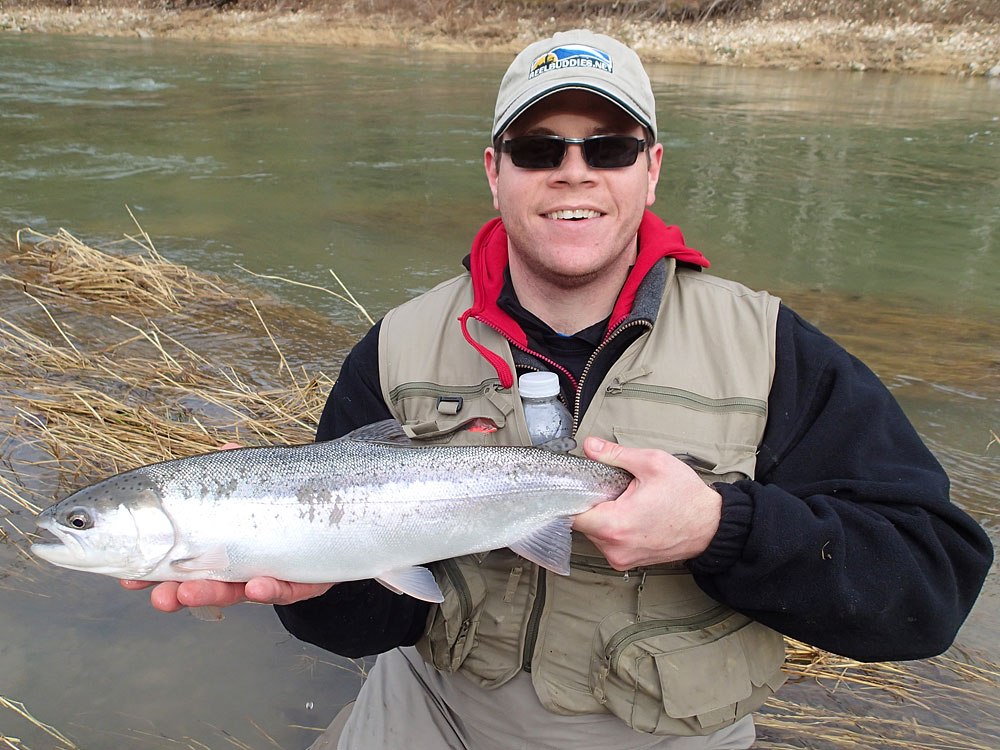 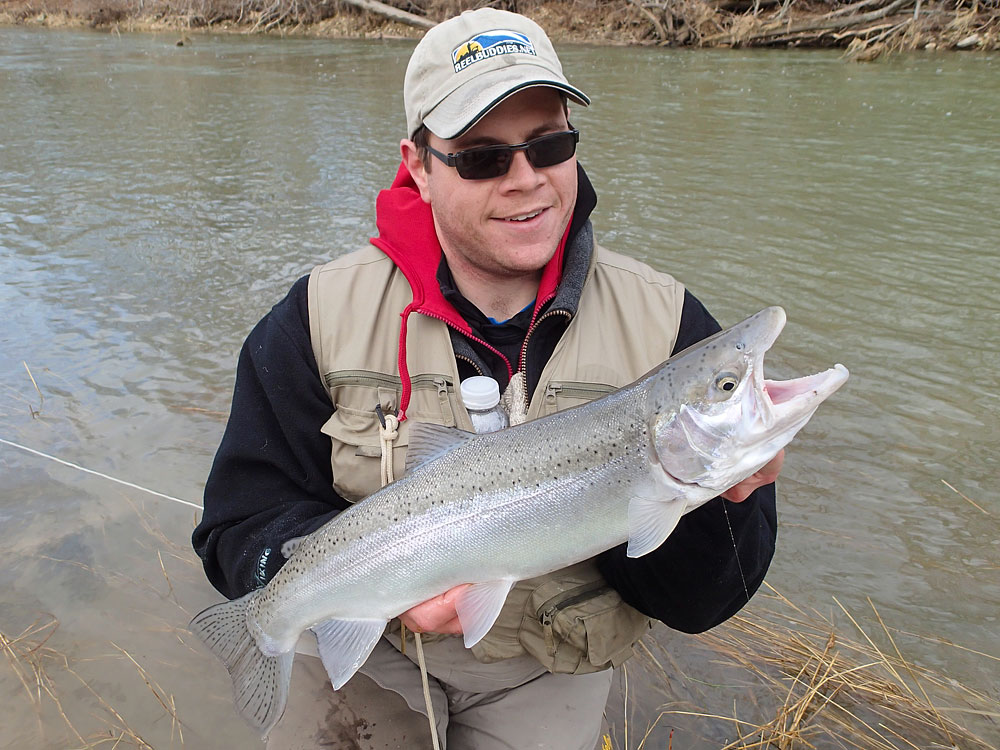 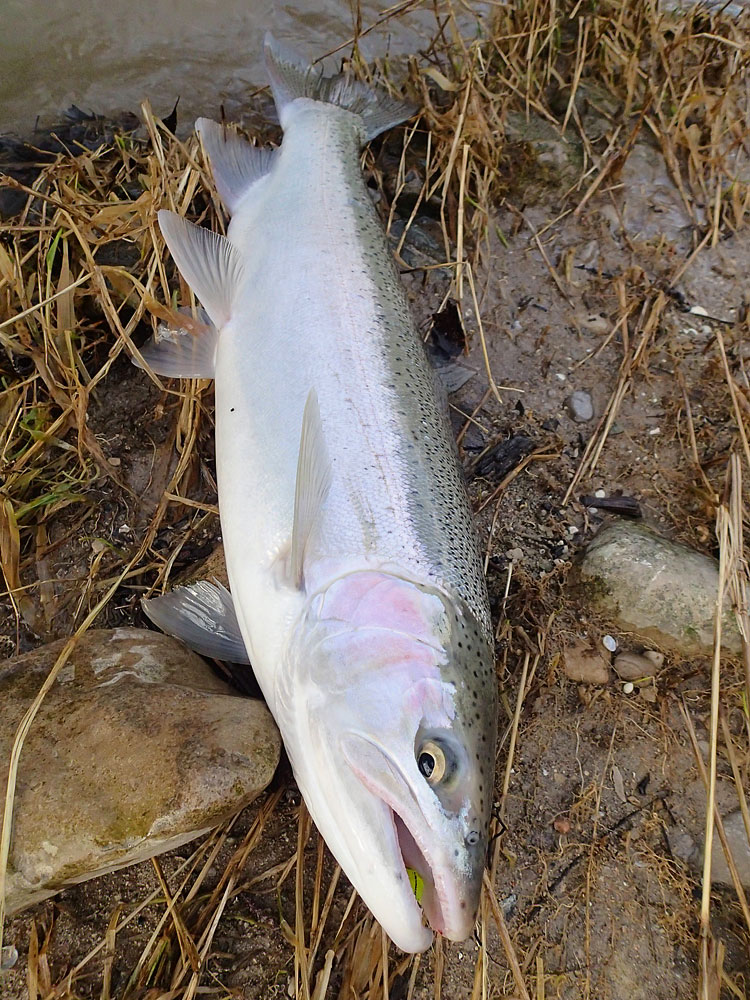 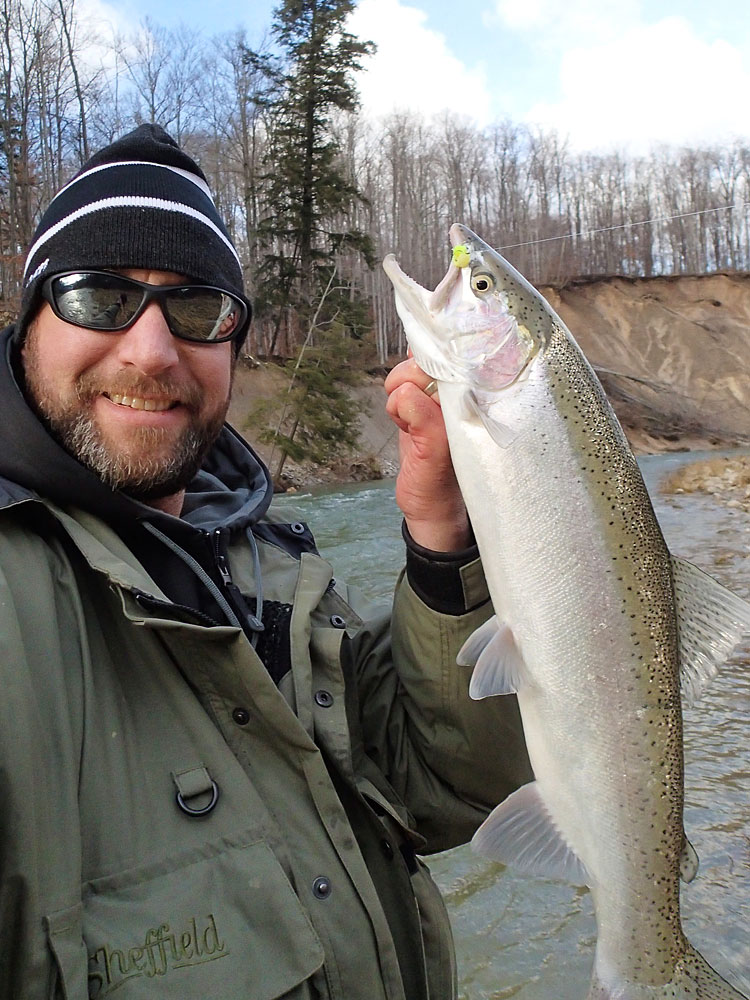 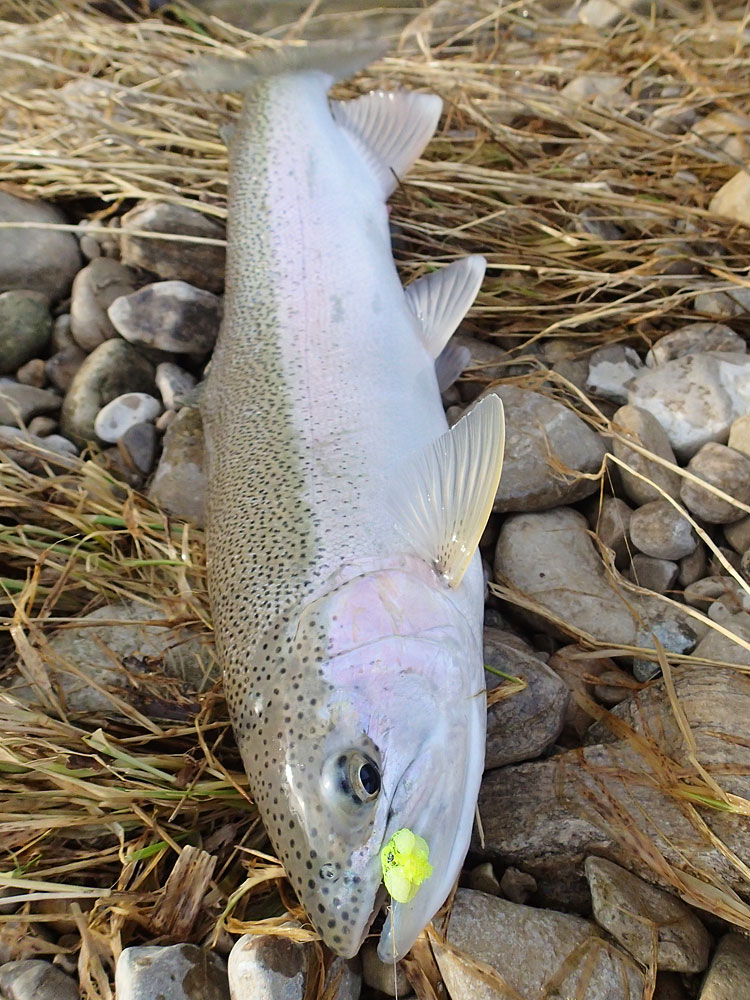 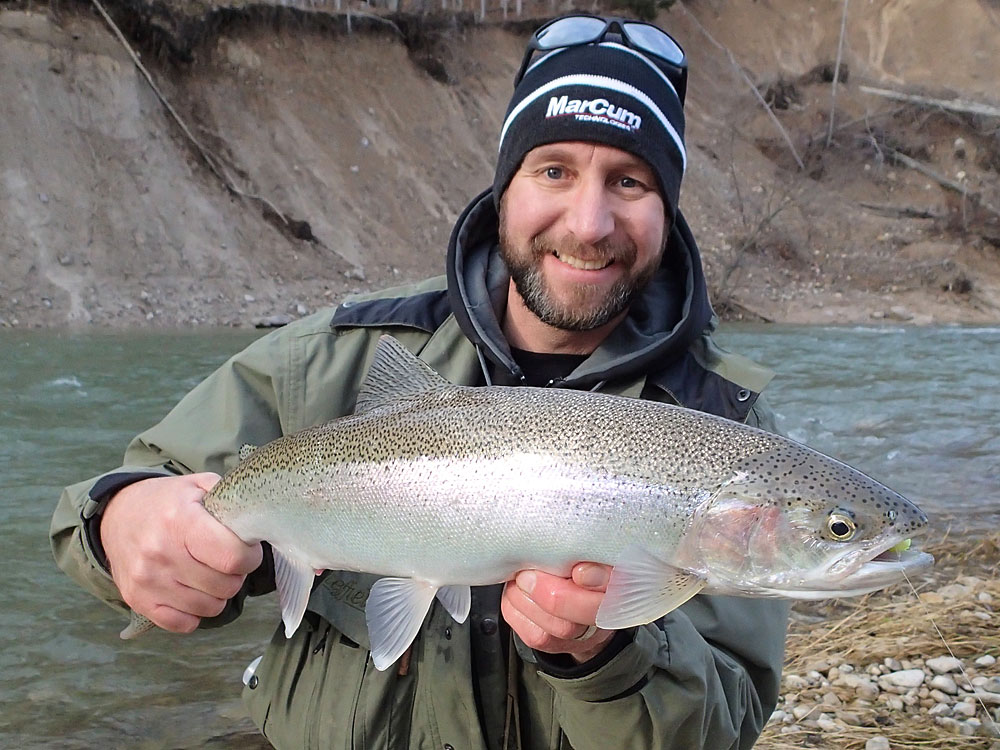 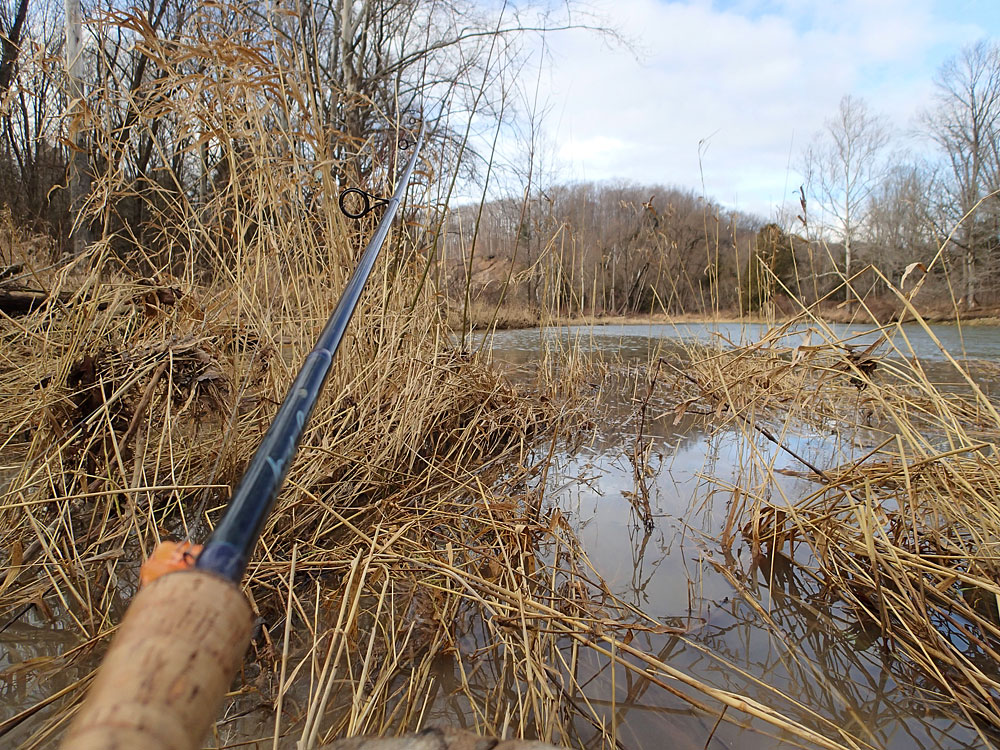 I used a 13′ Rapala North Coast float rod and centrepin reel spooled up with 8lb Sufix Siege. I had a 7 gram float with staggered split shot to a micro swivel. I had a 24″ Sufix fluorocarbon leader 6lb test to a size 8 Gamakatsu octopus hook. Rainbow eggs tied in various coloured mesh worked well, but chartreuse had the edge for me. I am going into my third season now with my Rapala waders, and I love them. They are well made and comfortable. I would highly recommend them to anyone.

I think with the cold weather in the forecast, the steelheading on smaller rivers will be coming to an end soon. Get out while you can!