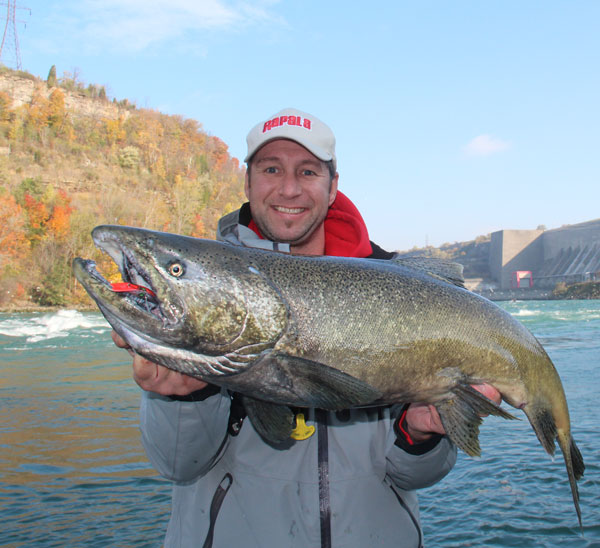 Aaron Shirley and I headed for the Devil’s hole to test some new gear for brawly Niagara River Chinook salmon and we were not disappointed. Our strategy was to “test-fish” a section of the Niagara River from an anchored boat position fishing the new Rapala Concept Ti Drift Rod and Shift Drift Reel with cured and dyed salmon skeens and also by casting Luhr Jensen Kwikfish, Vibrax Spinners and Rapala J13’s.  I ended up hooking the first salmon using the Concept Ti drift rod. If fought hard, and started heading out to the strong current and downstream. We had no choice but to lift the anchor up and chase it.  We scrambled to catch up to it, but it had already taken about 200 yds. of line out and by the time we got close to it, the line was cut by fish going around rocks.  Next Aaron cranked a #11 Luhr Jensen Kwikfish and hooked a real trophy.  He was able to fight the fish back to the boat using the Rapala North Coast 10 1/2′ Baitcasting outfit loaded with Sufix 832, 2o lb. braided line and Sufix Fluorocarbon leader. If look closely at the image above you will see how well the Chinook nailed the Kwikfish! 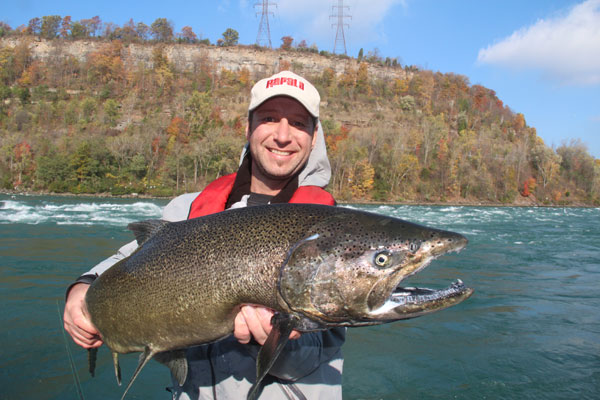 In about an hour the winds really started to pick-up making it very tough to fish. Aaron ended up landing a second Chinook drifting a chunk of salmon eggs which he also landed while we were anchored.  Our test proved positive! With Aaron’s guiding experience on the Niagara River he chose the right location where we could easily cast to feeding salmon from a stationary position!