Anglers on both the NY and Ontario side of Lake Ontario are taking advantage of the plentiful Chinook salmon runs that have entered most of the tributaries. While some salmon are still being caught off piers and  at river mouths, most are upstream.  The lower Niagara River is attracting many recreation anglers accessing the Queenston power generating station fishing area and also boat anglers fishing mostly the area just south of Queenston, ON referred to as the “Devil’s Hole”. Boat anglers there are drifting the bottom mostly with skeened salmon egg or salmon egg roe bags. Shore anglers are casting lures and also using skeened salmon eggs. 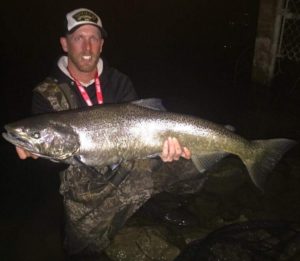 The Niagara Whirlpool has also been good with many anglers catching and releasing 2-3 salmon per outing and the odd steelhead. Shore anglers there are also catching them casting lures like spoons and the Rapala J13 in the fluorescent colors. Best fishing is very early, just at daybreak, or after dark with glow-in-the-dark spoons.