Yuri Grisendi, an experienced and well-known catfish fisherman caught the new record Adriatic turgeon on November 3, 2015 in the Po River near Ostiglia (Mantova). The fish with a length of around 2 metres and weighing between 60 and 80 kilograms was released alive after some quick photo shots. Grisendi uses a specially equipped boat hat he uses to catch Wels catfish.

This endangered and protected species was an unexpected catch. Apparently the recovery actions and repopulations carried out in the past years have been successful. Most probably this fish, like the previous one caught by the same fisherman, is part of the stock of 2.000 fingerlings released in 1992 by the Mantova province. 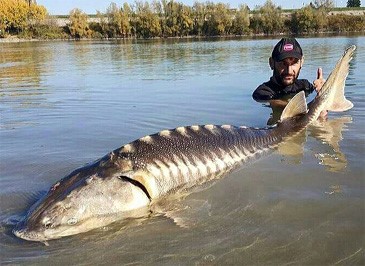 This entry was posted on Monday, January 30th, 2017 at 10:30 am and is filed under News. You can follow any responses to this entry through the RSS 2.0 feed. You can leave a response, or trackback from your own site.