Roland Lavoie inventor of the Eze Docker device just returned back from a vacation in Los Cabos, Mexico. He contacted me before his trip and asked about fishing charters and I tried to help him as much as I could.

Well, Roland ended up going out and landing a trophy Striped Black Marlin here’s his account; “My wife Lise and I left the marina approximately 7:30 am in a 34 foot fishing boat. We had purchased our fishing license and were ready for fish, I found it interesting that no down riggers were used, and we were surface fishing.  I researched that marlin are deep sea fish however come to the surface to feed. We had 5 rods working, two with fresh bait and 3 with plugs.  Four hours in we were doing some amazing whale watching, and also saw many at least 6 sea turtles. Suddenly we had 4 simultaneous hits on the lines.  The captain and mate we’re amazed and excited running to each rod.  I grabbed the rod closest to me started reeling in the fish.  Just as quick two leaders snapped off the lines leaving only the two other fish hooked-up.  The 1st mate realer in and put away the loose rods then took the rod I didn’t grab, and reeled his in within 25 min. It was a 5 foot Blue Striped Marlin. My fight took over an hour I wanting to release my trophy but the 1st mate was so enthusiastic and he obviously wanted to keep the marlin for food. My catch was a 105 inch 220 lb Blue Striped Marlin. I was informed that this fish averages between 75 to 85 inches, and that this one is one was more than a trophy.  Many of the boaters on the docks were amazed.” 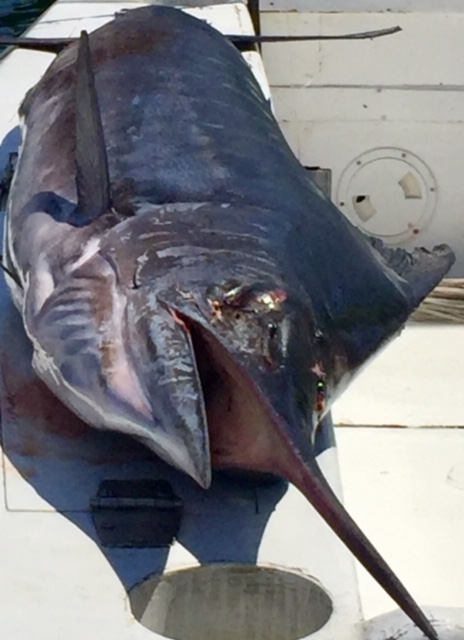