I had a chance to take out a couple of friends Tony and Glen to Lake Erie for walleye recently. We hadn’t fished Lake Erie for walleye in years, so some preparations were in order. Tony headed over to my place one evening for a beer and to help rig our gear. It helped a lot, thanks Tony! After tying up 14 worm harnesses, spooling 30lb Sufix braid on 4 walleye sized Hydros and RSCII reels, making leaders and getting the dusty walleye gear out, we were all set. I ended up making up some custom Colorado blades painted and taped up, and my son helped me tie up another 6 worm harnesses the following day. We enjoy our time together doing ‘arts and crafts’ LOL.

We left early so that we could get out for first light and shake off the walleye rust with our set-up. Also, we had a major storm a couple days earlier and a cold front. We got set up with 4 small sized 000 Dipsy Divers on a 0 setting and worm harnesses, and ran them from 90- to 220 back and clipped on in-line planer boards. It’s a good thing the walleye line counter reels hold over 1000-feet of 30lb braid, as we had almost 500-feet out after the in-line boards were deployed. We rounded out our set-up with two large sized 001 Dipsy Divers right off the boat on a 2.5 to 3 setting with worm harnesses.

We started in 65-feet of water with some tips from a couple friends I spoke with and headed deeper. We didn’t get into much and had to go into search mode. We started switching up colours and trying spoons and stick baits as well, even though the eastern basin of Lake Erie is predominantly a worm harness bite. After a while we got into a few walleye and marked some waypoints. We found a good group of walleye schooled up in one tight area, and ended up working the 4 waypoints hard by late morning. 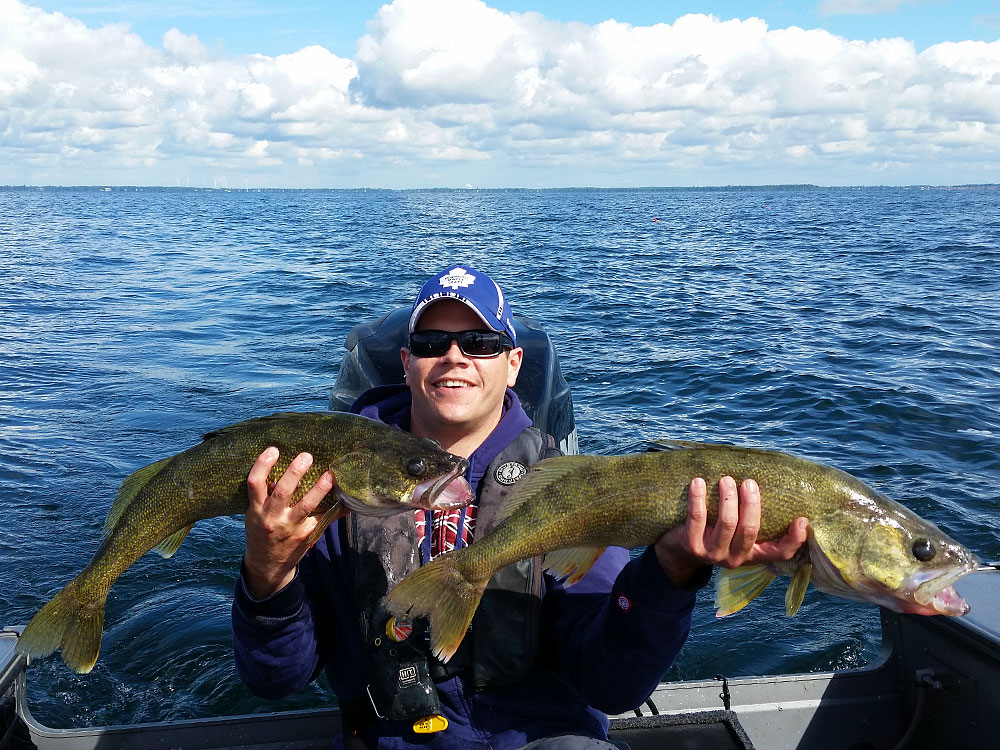 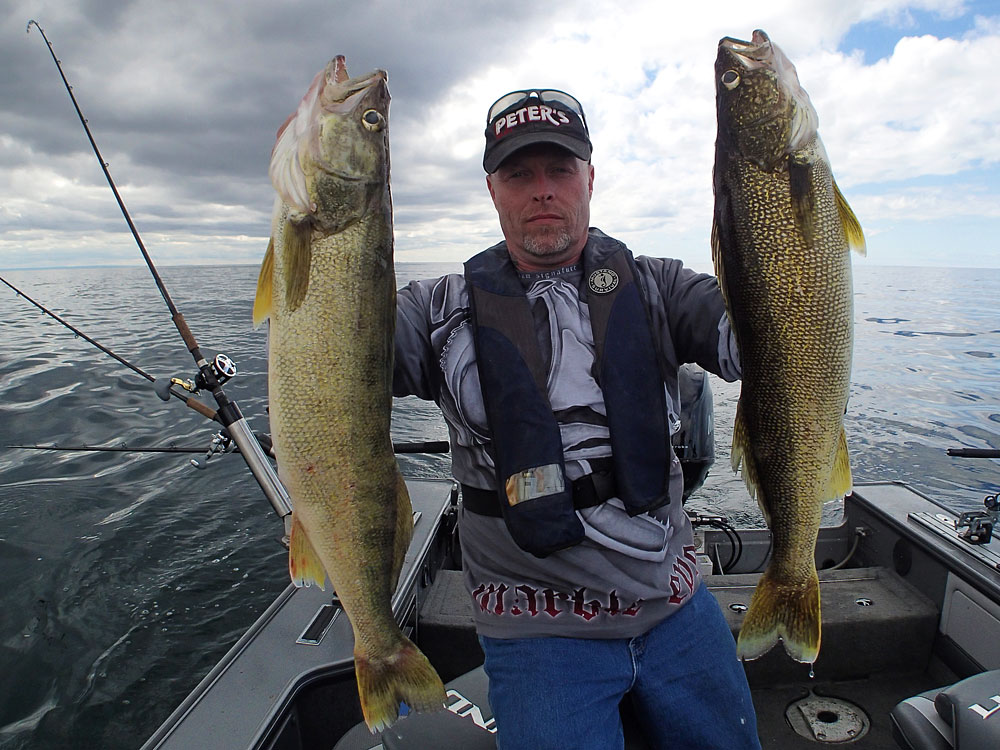 The weather was great, the waves were perfect and we were catching walleye and having a great time. We had to watch the rod tips carefully, as the white bass were hitting and tougher to tell a fish was on the line. The deeper Dipsys off the in-line boards did well 225- to 250-feet back, and the big size 001 Dipsys off the boat did well 140- to 170-feet back on a 2.5 and 3 setting. It was a good thing I spent more time tying up more custom harnesses with my son, as the white/yellow/green black dot harnesses were working well. We did get some on watermelon and blue and white as well as a few others. Stick baits took a couple bites, but harnesses were best. We tied up the worm harnesses with 30lb fluorocarbon approximately 24” in length. The reason I prefer 30lb fluorocarbon is that the clevises turn on the fluorocarbon causing a weak point over time, and 30lb Sufix is a perfect solution to help prevent break-offs over lighter line.  We also ran a 7-foot fluorocarbon leader in 15lb test from the Dipsy Divers to the worm harness or stick bait and spoon on all Dipsys. 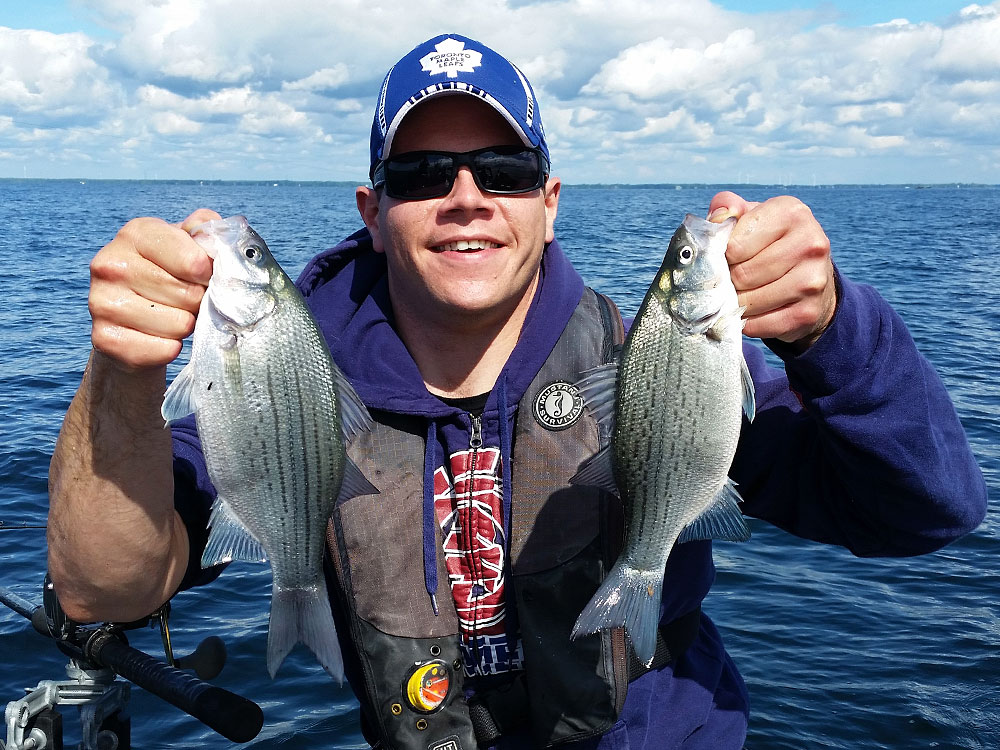 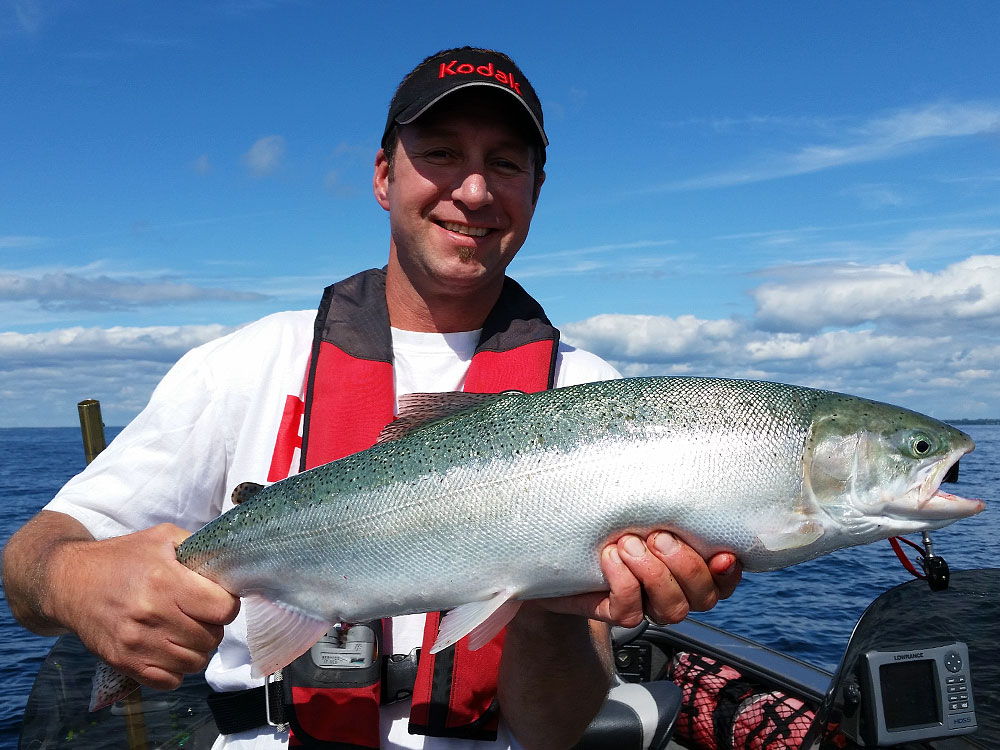 We found the walleye suspended in the water column from 35- to 65-feet down over 65- to 75 feet of water. Our speed seemed best at roughly 2.6mph. We got into a bunch of walleye, white bass and even a steelhead. We all got to take home some fresh walleye and had a blast out fishing!