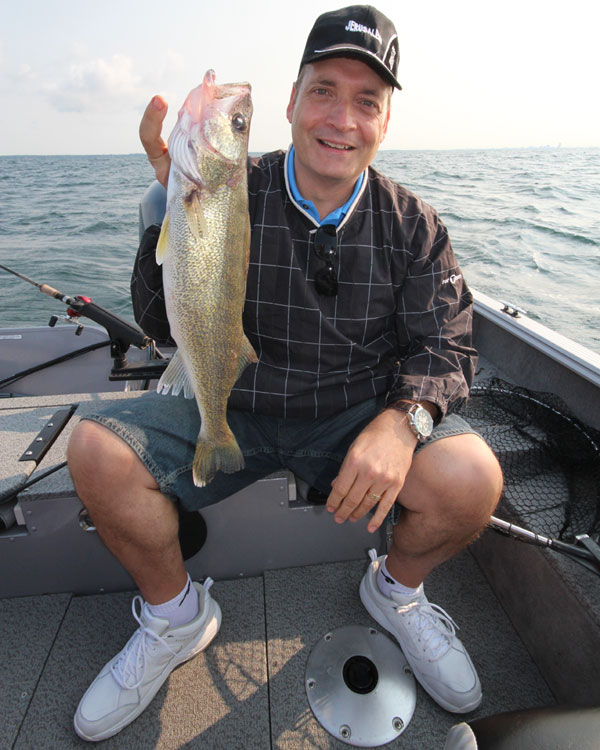 I had a chance yesterday to fish with our good friend Ron Mainse, host of Hundred Huntley Street television program and Patrick Casey and James Law from Crossroads Television Systems.  Many of you know that CTS- Crossroads Television Network also broadcasts the Canadian Sportfishing show each week on Saturday mornings at 10:30am right across Canada. 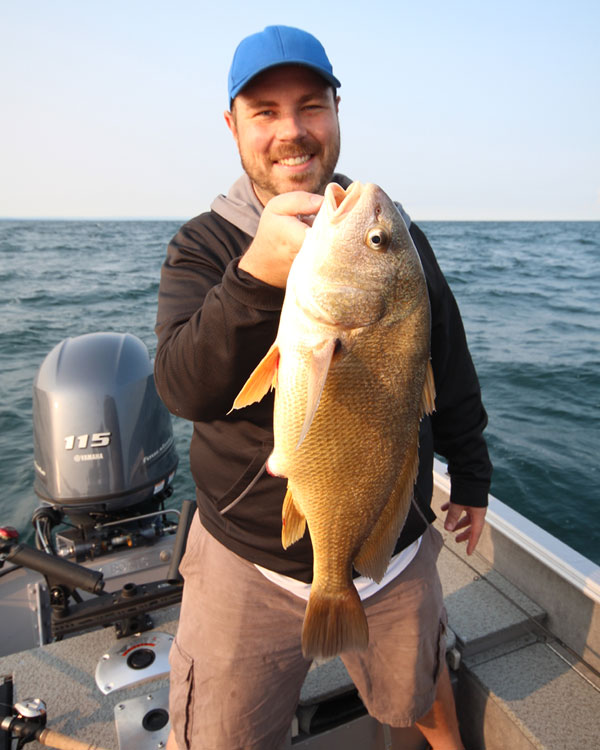 I had shot a couple of TV shows back around 2000 with Ron and his two sons and we also did some fun fishing for jumbo perch on Lake Simcoe, ON and than enjoyed a family fish fry.  Well, it was time to fish together and have another fish fry! 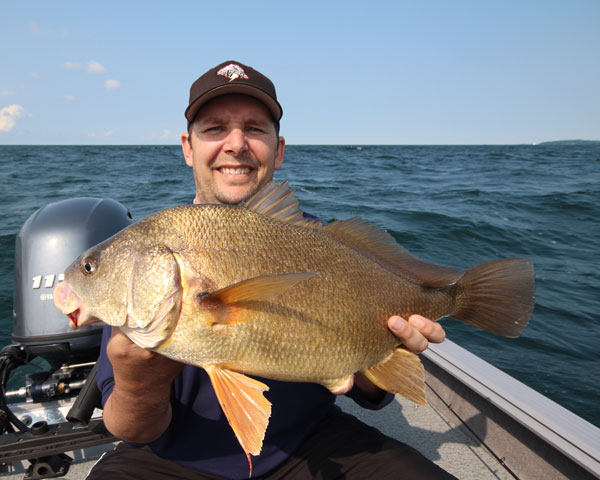 We met at Crystal Beach, ON at 7am.  Erie was rough and not too many boats had ventured out, but we decided to go anyway.  It was slow navigating in the  2015 G3, 172FS   to reach the 60′ depth where we set our lines and started trolling. We relied on the  Humminbird 1100  series fish finder to track the depth and mark baitfish and gamefish. 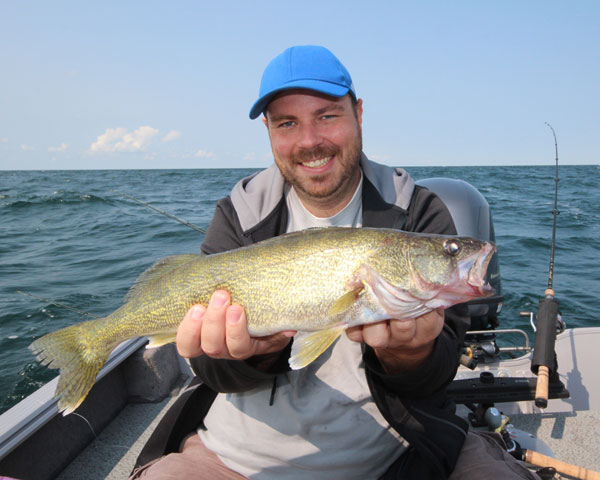 We rigged-up  Raplala Tournament Walleye rods equipped with Rapala reels, and loaded with  Sufix 832 braid .  We set-up  Luhr Jensen Dipsey Divers on two rods and the other two rods were rigged with 4 oz. bottom bouncers.  For our presentation we used the Luhr Jensen Jewel Bead Worm Harnesses with whole dew worms. 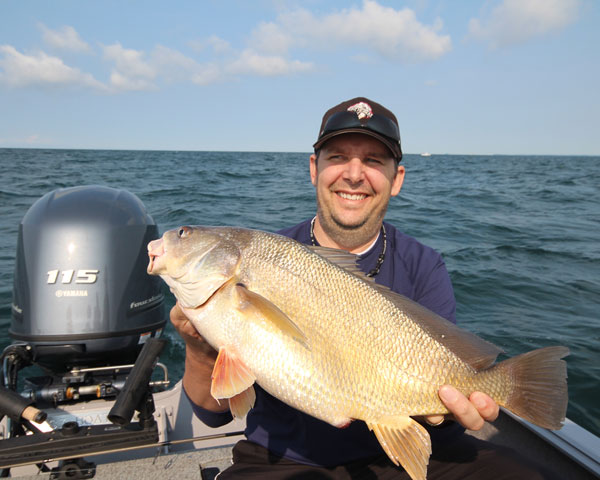 We quickly started hooking one sheepshead after another, many really good size, but no walleye.  I had fished the same area last week and we had caught mostly walleye and maybe one sheepshead.  Yesterday it was totally different.  After landing several big sheepshead I decided to fish deeper and farther out in the lake. 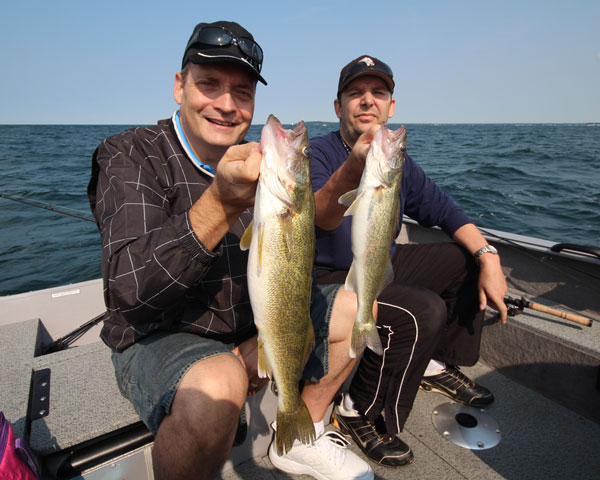 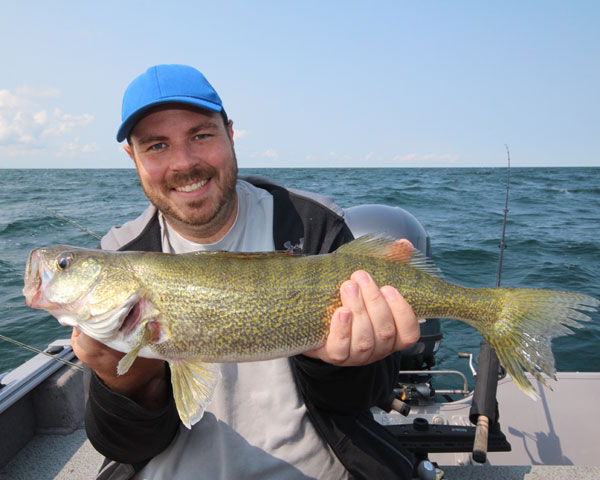 James smiles as he holds up a chunky 4 lb walleye that took the worm harness off the Dipsey Diver running about 25-30′ down over 60′ of water. 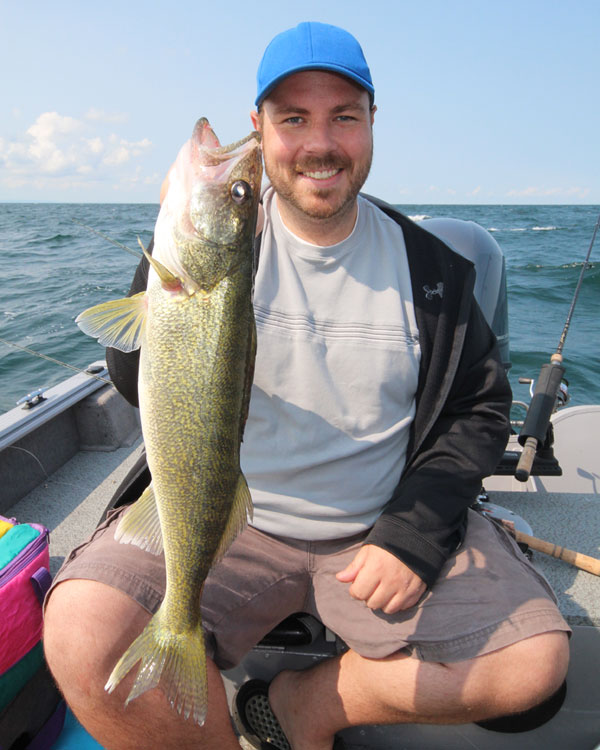 We ended up landing probably 12-15 sheepshead and 6-walleye and the waves continued to role, so we decided to head closer to shore and try our luck for smallmouth. 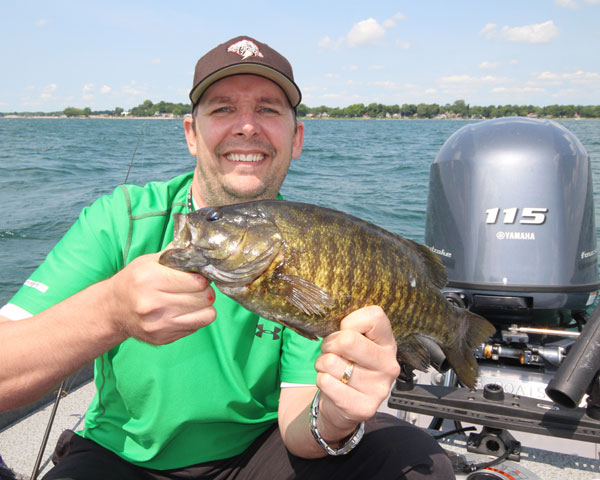 We decided to fish “drop-shot” rigs along the 18-22′ break about a 1/2 km out from Crystal Beach and let the strong wind do most of the work. 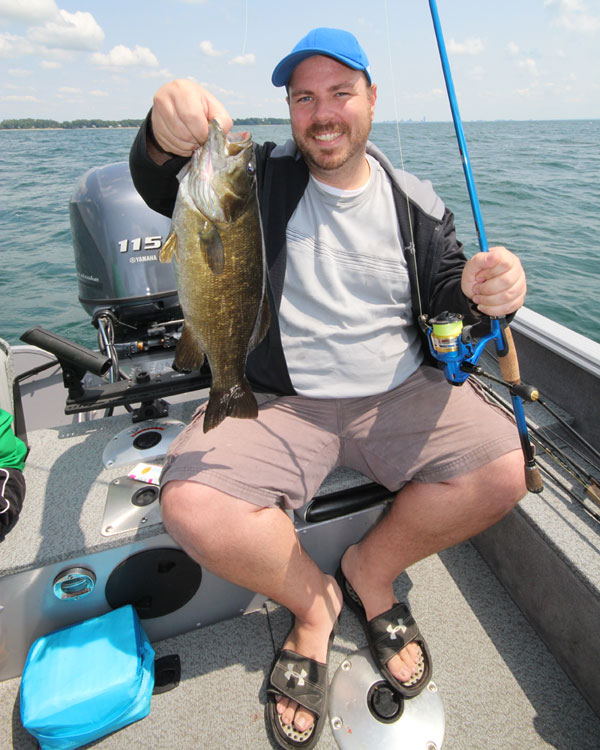 We literally had non-stop action continuing to hook large sheepshead and some nice smallmouth bass. 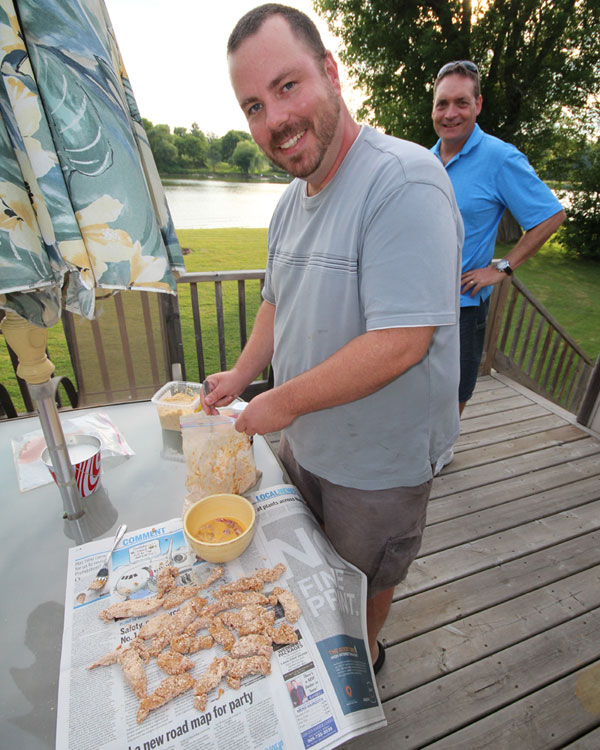 We left around 3pm, headed to my house to clean the fish, than it was off to the Byron’s cottage on the Grand River near Cayuga, ON to enjoy our fresh-fish fry. 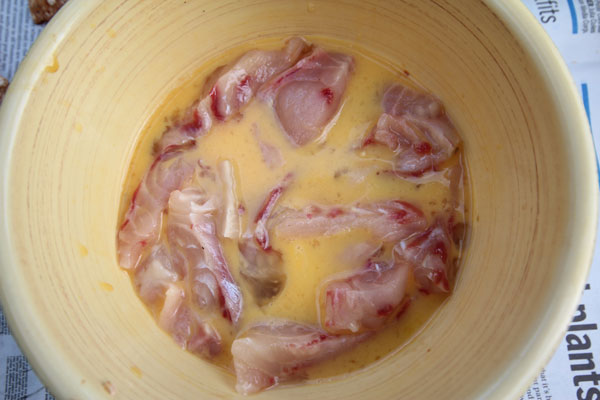 I set up a frying station on the back deck and James helped by marinating the sheepshead “fingers” in egg before he coated them with Cajon Fish Crisp. 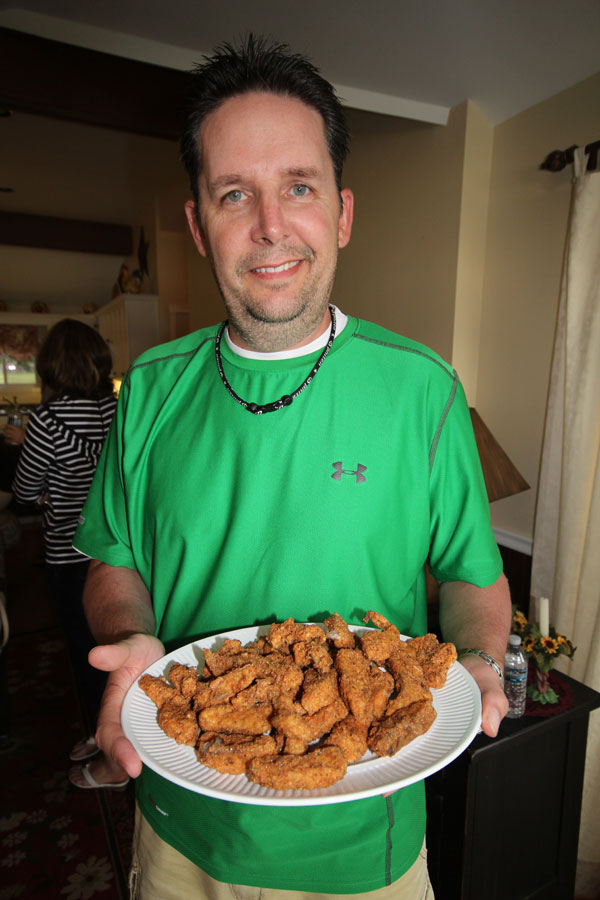 We worked as a team and in no-time the fish was ready.  Our wife’s were on hand and had also prepared delicious salads and deserts and the meals was on. 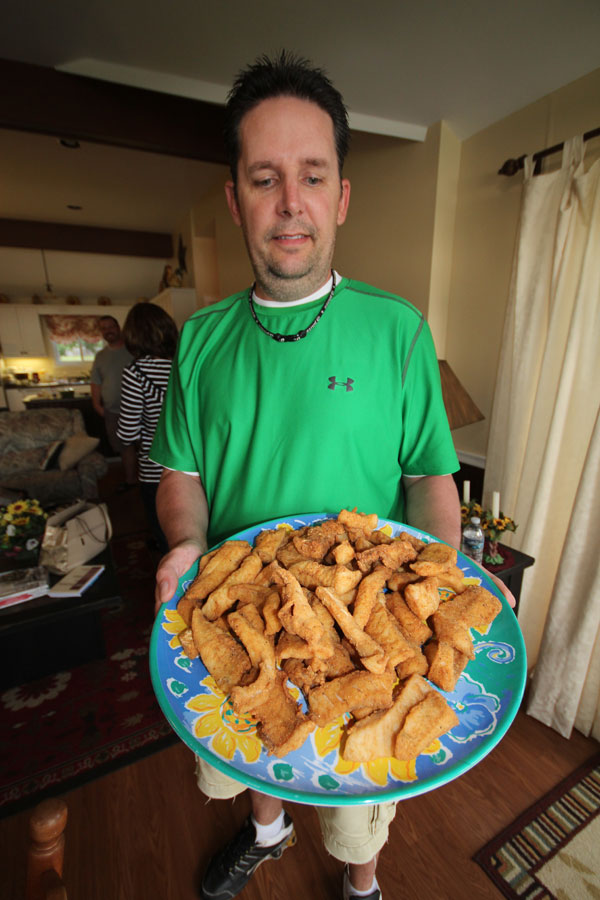 I can speak for everyone that the fish was excellent. We dipped the sheepshead fingers in seafood sauce and they tasted great! 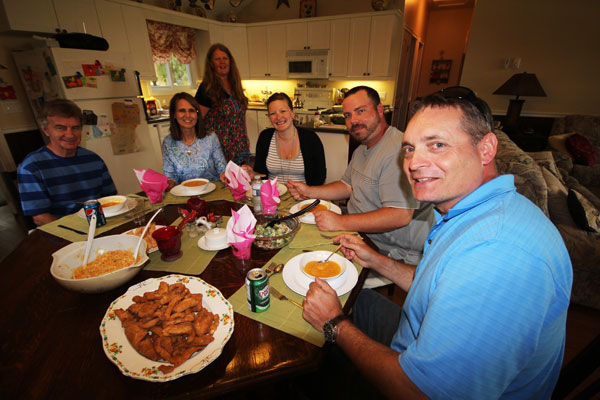 Fishing can really build up an appetite and we al enjoyed a great meal and socializing! 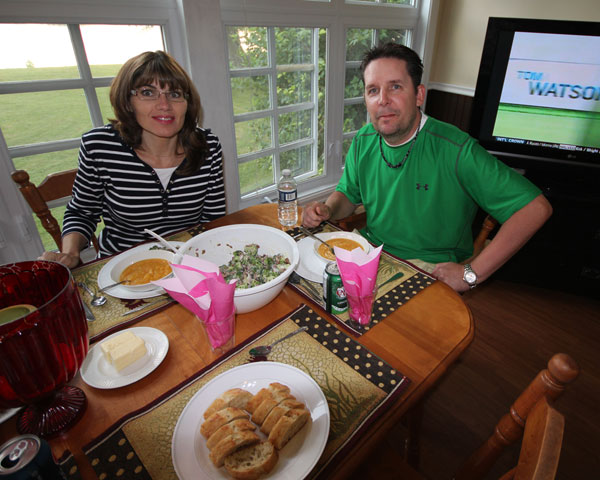 Catching fish is fun, but you know what, having a fresh fish fry with friends really completes the day! 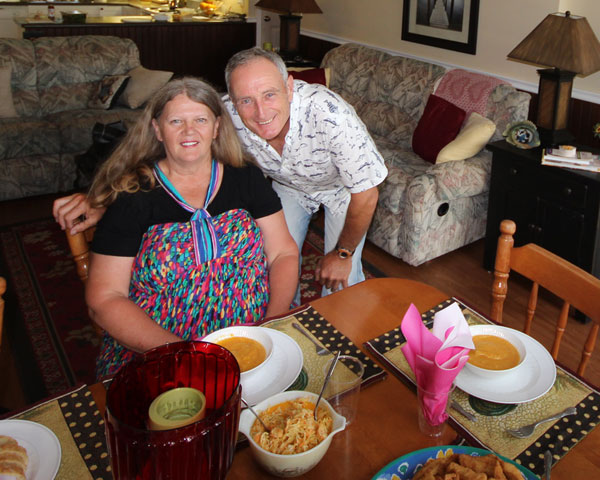 Now I have my mind set on gearing up to fish the Bay of Quinte early next week and shooting some dynamic footage catching walleye and largemouth bass on crankbaits and largemouth bass from thick cover using TriggerX soft-lastics and some great new Rapala gear.