I still remember vividly my first Steelhead that I caught in 1975. It was only 21″ long, but ended up making the Oshawa Times paper as a big trout and I had it mounted.

Keranne Pim wrote to us and send an image of her 1st steelhead she caught on opening  weekend and I wanted to share it with everyone.  She did is using a center-pin drift outfit which is no easy feat for the first time. Here’s her story:

“I caught my first steelhead on a tributary east of Toronto. We got there just after first light and fished a pool for almost an hour with no luck. My boyfriend Gary suggested we move upstream a bit to try somewhere else. When we got there it was pretty busy but we were able to find a pool with nobody fishing in it. I was drifting a pink roe bag and a pink bead (because they’re pretty lol) along a small log jam to a fallen tree. My float dropped right under the fallen tree on my third or fourth drift. I set the hook and even though it was my first steelhead (I’ve caught bass, walleye, perch and even a musky) I knew it was a pretty nice fish. She started peeling drag and jumping all over the place. I was pretty nervous because there was lots of people watching and a lot of trees and wood that I thought it would break off in. It fought for a long time and I was so happy and relieved (not to mention tired) when my boyfriend grabbed its tail and pulled it out of the water. We fished a while longer there with no more luck then moved again. I lost another fish later on and caught one small one about 10 inches. It was a really fun day and I am totally hooked on steelheading. I’m thankful that Gary Shaw got me into fishing 🙂 I can’t wait to get my next one!” 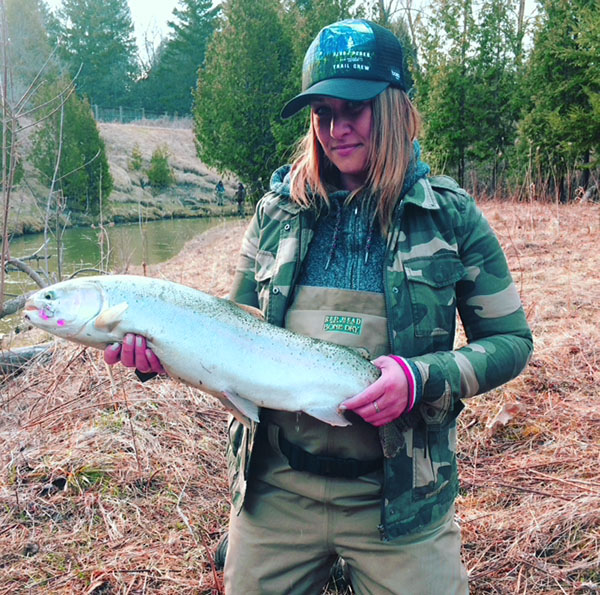