[nggallery id=906]Wow! That’s sums up today’s fantastic fishing outing in northern India.  While Francine rested up, Carl & I headed out with our guides at 7am to one of the local rivers where due to the steep terrain, we had to drive to an access point downstream of where we intended to fish, than we needed to wade about 1/4 km through knee-deep water, and around large boulders to reach a few larger pools where Mahseer were holding.  Good thing the water wasn’t too cold!  I marched ahead looking to see if I could spot fish while our guides Soby, Bobby & Vjay helped Carl navigate through the water.  I must tell you Carl is a very active 73 yr. old that was up to any challenge to catch some nice fish on the fly.  Remember yesterday, we covered kilometres of water hiking and wading in search of the Greater Himalayan brown trout and Carl kept right up with me. When we got to the first pool, I spotted 3-nice Mahseer and Carl started casting to them. I headed a little further upstream and found another run with fish and immediately hooked our first fish of the day. From that point on the fishing was pretty hot.  Carl moved up to the same run and landed his first fish while I battled another nice Mahseer just downstream of him.

[nggallery id=907]We finally worked our way up to the top pool that was “loaded” with Mahseer where we both caught enough fish to tire us out.

Carl landed the largest trophy that was probably over 48” in length and weighted just over 20 lb.! It gave Carl such a good fight sizzling line-out and not giving in right until it was landed.  It had such a wide back that neither one of us could grab it near the head and finally Carl landed it using the Normark glove.  After a few nice pictures and a big “kiss” from Carl on the snout, the trophy was released to grow larger and hopefully make another anglers fishing dream come true. 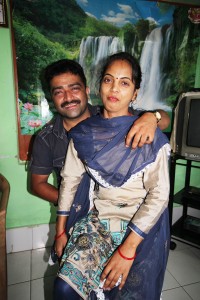 After Carl returned to the Taragarh Palace, I had a chance to visit Bobby, one of our guides and meet his lovely wife Reenu.  She prepared some delicious Masala tea & sweets just to complete the day.