Steelheaders, now is the time to intercept the largest steelhead as they enter the lower end of the tributaries and start their migration up-stream.  I was out today and some tributaries are completely open in the lower sections to Lake Ontario and big fish are moving through. 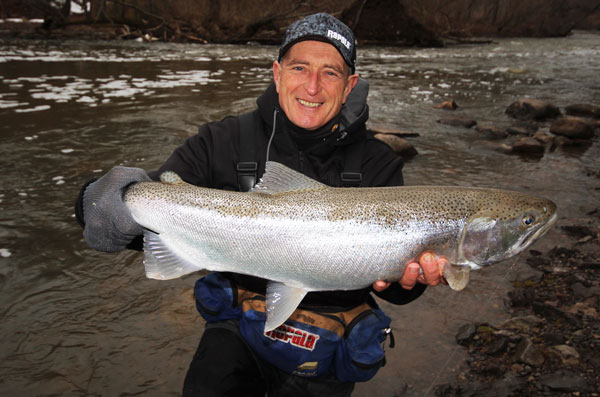 It was cold, windy and wet, but it was worth it. This was my first fish of the morning which I named “Out-of-Control”, (AKA-600yarder).  The reason, the fish shot my float under, came to the surface making surface-boils similar to a divers-fins, ran at me, took off, made several roles on the surface and b-lined it down-stream. After carefully wading around trees, through fast current, over large submerged boulders while trying to keep my line coming off the R-Type float reel rim (not around the handle, or around the reel!), I was able to finally tail the fish with my Normark glove about 600 yds down river…..bring it on!

I did not weigh the fish, but I took an “Italian-measurement”….it spanned from my R-type float reel up the rod to the first guide (about 33”)!

Wish I could fish tomorrow, but I’ll be at the Cottage Life Show doing a fish cleaning & preparation demonstration at the MNR & F exhibit.  If you’re at the show, make sure to stop by.