Great Lakes Trib Chrome with a Side of Browns

I was recently able to get out fishing for two quick float fishing trips. One was locally on a couple of tributaries of Lake Ontario. I fished with Matt from the Burlington Sail store, and we met up with his friend Jordan that has recently taken up Great Lakes tributary fishing over the past year. It was great to meet you Jordan, your enthusiasm was great to see! Matt is a hard core angler that is very knowledgeable. If you get the chance to visit the Sail store in Burlington, he is a great guy to chat with.

The first trib we started at was low and clear, and as a result was very poor fishing. Matt and I had a couple of bites that didn’t materialize, and we discussed moving. After a short time float fishing various baits, we ended up agreeing to move to a different river altogether in the hopes we would have better conditions.

Once we arrived, we noted there was a slight stain to the river, but it was very low. The conditions were not much better, but at least they were better. I believe that we all had a bite or two that again didn’t materialize until Matt set the hook into a feisty little steelhead. He had some fun and landed a nice coloured up steelie. After such a tough time it was really nice to see a fish on the bank! I left shortly after without landing a fish, as I had to get going. It was nice to get out for a short while.

Although it was nice to get out with the guys, I wanted to put a bend into my rod. After viewing details on the river flow charts, I decided to try some Lake Erie tributaries. I wouldn’t have long to fish, especially with the drive, but the conditions looked good on the charts and seemed like my best bet. Lake Erie had some snow fall and a melt off with slightly warmer temps helped the river levels rise and become stained. When I arrived to the first spot, I quickly realized that the river was muddy with poor visibility. There was less than a foot of vis with brownish coloured water. This was not ideal, and I decided to head to some smaller tribs in the hopes that I would find better water conditions. I checked a couple creeks with poor conditions before I finally came to a small creek with over a foot of visibility and a greenish brown colour to the water. Finally, after driving for a while, I found what I was looking for. I would much rather shorten my day and fish better water than spend my time fishing a muddy creek. That was a great move, as I fished for three hours and caught a dozen fish. Many were small, but I did get into a handful of nice steelhead with a couple of brown trout. 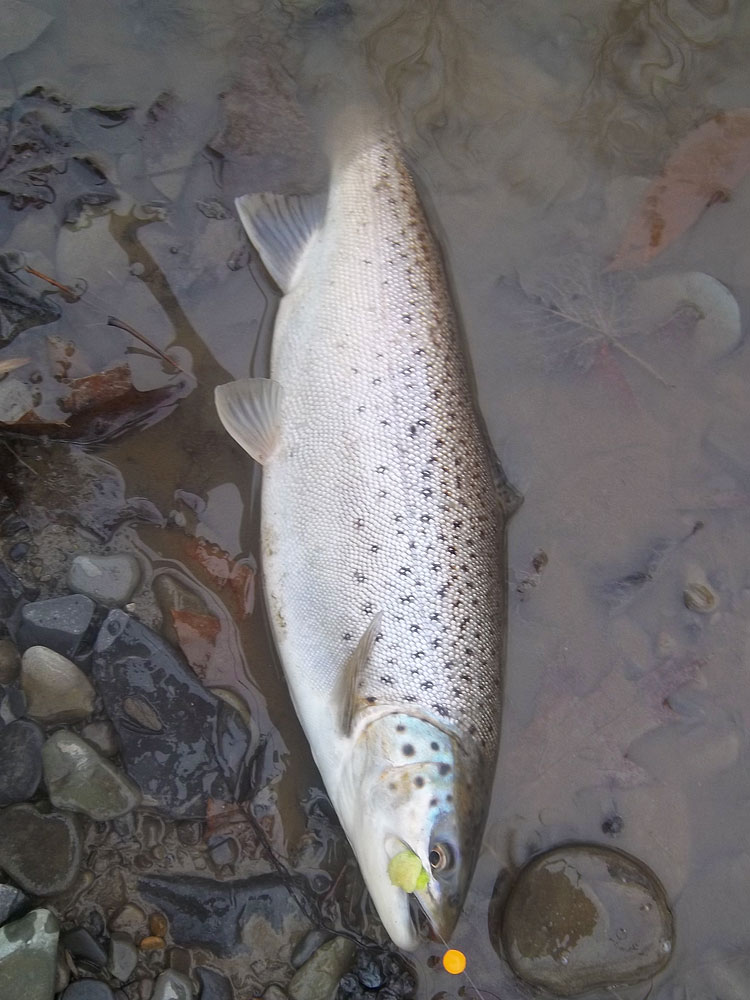 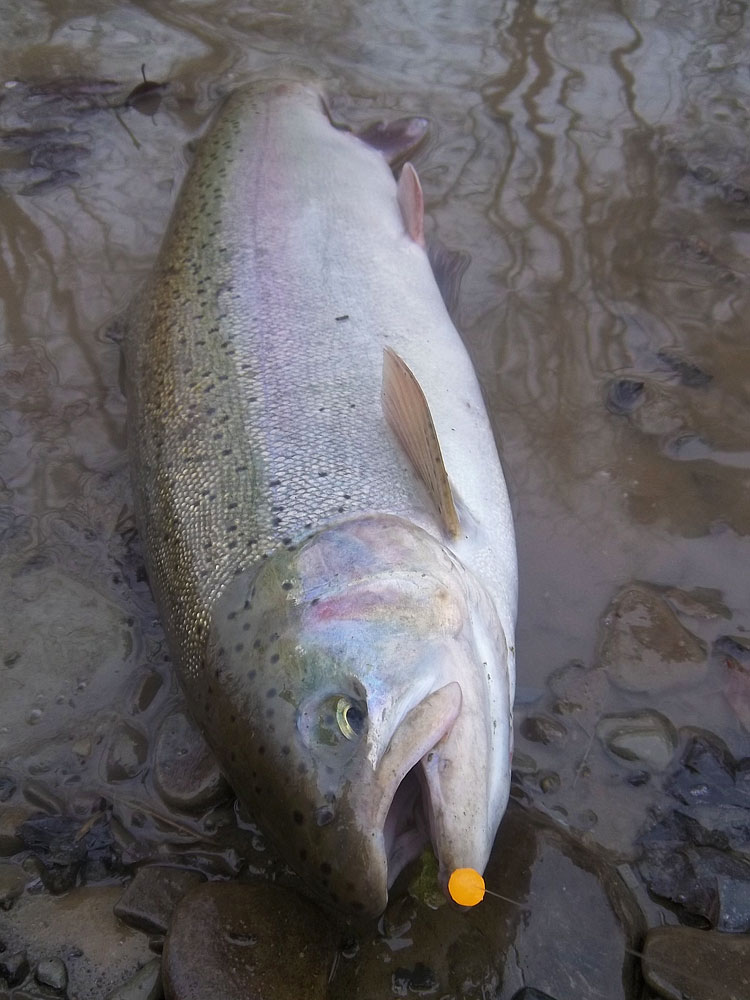 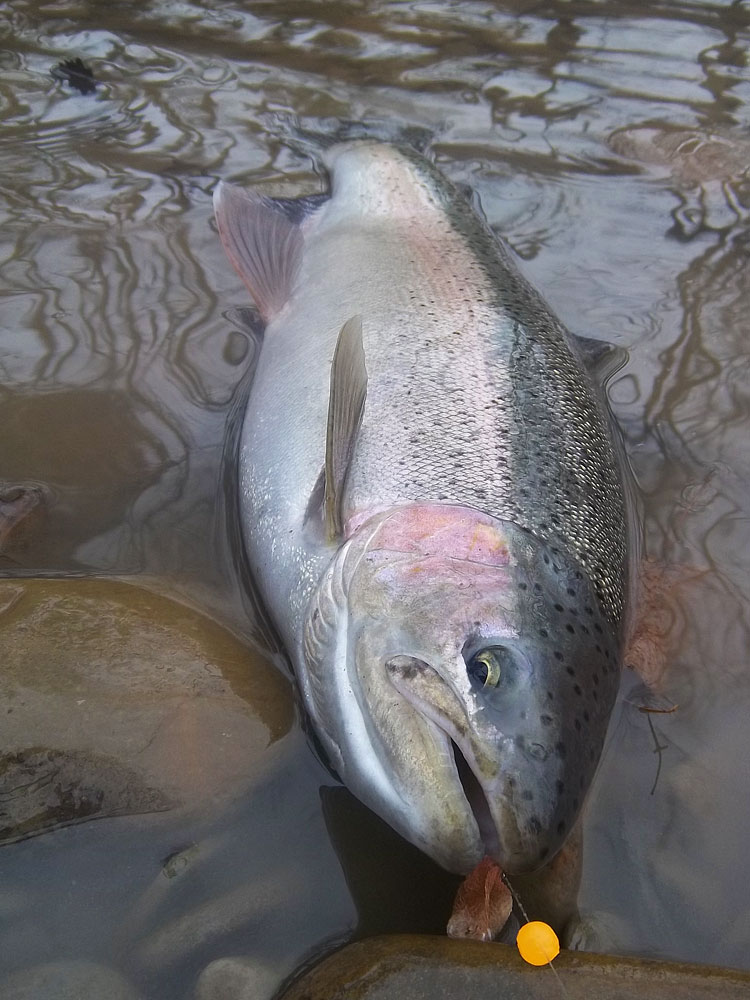 I float fished with a single UV bright TriggerX orange egg and roe bag combination for the best success in stained water. I utilized with the Rapala Shift centerpin and 13 foot North Coast float rod. I have 8lb Sufix Seige main line spooled onto the centrepin reel, and added a micro swivel. I then added another 6-feet of a shot line to another micro swivel with split shot and a G1 float in a 4.5 gram size on the shot line in between the two micro swivels. I stagger just enough split shot to allow the float to sit at the water line while drifting. The water line is where the fluorescent and green wood colour meet, and allows the float to be pulled under quickly with subtle bites. This is especially important in colder weather. I added an 18″ 6lb Sufix fluorocarbon leader to a size 8 Gamakatsu Octopus hook from the second swivel. I always prefer to use fluorocarbon leader line even in stained water, as the properties of the line sink. This can be important to get down to the fish, as I don’t add any weight on the leader line itself. This helps achieve more bites and I rarely break off the entire set-up. I keep a set-up for an entire season often only breaking just the leader. This will help save split shot and floats and cost you less. From there I threaded on a single TriggerX egg in the middle of the egg and up onto the line. In clear water, I just fish the single egg, but in stained water I sometimes add roe tied in Spawn Net like I did this trip.

I often add a TriggerX single egg to my line just above a black nickel Gammy hook. The trick to keeping the egg from slipping onto the hook constantly, is to dry the egg out a bit so that it firms up a bit. The size will shrink slightly, but it works better than a trout bead this way IMO. If you dry the egg out too much, they will become quite small and too hard. I simply remove the fluid from the package and reseal it. This works perfect to firm up the eggs to the best consistency to thread onto the line just above the hook. The egg will not keep slipping onto the hook on every drift this way. If I want to change the colour of egg, I simply remove it and put on a different colour in seconds. I don’t have to retie the hook like a bead, and this not only saves time and expensive leader material, it helps keep your hands warm. here is nothing worse than retying all the time in cold weather!