Hundreds of herring-like fish have gathered in a dense shoal at the mouth of a waterway feeding the Thames River, north of Blackfriars bridge, delighting onlookers with an impressive display of nature.

“It’s cool. I just went for a bit of a walk and I didn’t expect to see this, that’s for sure,” said Gerry LaRoque, a hobby nature photographer who brought his camera hoping to capture some images of birds.

“I put the big lens on hoping to get something up there,” he said, nodding to the treetops. “I didn’t expect to see something down there.”

Down there, in an estuary where the mouth of a stream of storm water drains into the Thames River, are hundreds, maybe even thousands of writhing, silvery fish swimming so densely together it appears as if one could walk across the water atop their backs.

People out for walks or a jog would often stop at this foot bridge to admire, or photograph the large numbers of gizzard shad that had congregated in this estuary along the Thames River. (Colin Butler/CBC News)

In fact, there’s so many of them, the water appears black and its surface looks as if it were boiling. The activity is attracting a fair bit of attention from people out for a stroll, who often stop to see what the fuss in the water is all about.

Once they realize what’s happening, their faces light up in wonder, said Lynn Heinitz, a jogger who regularly passes through the area.

“People are lining the banks in kind of awe that, ‘Wow, this is a cool thing.’ We’ve never really seen this before.”

One of those awestruck people was Chris Hanbidge who happened to learn about the fish while out for a stroll with a friend.

This shoal of gizzard shad spotted in an estuary on the Thames River, north of Blackfriars bridge in London, Ont., likely contains hundreds of individual fish. (Colin Butler/CBC News)

“Where did they come from? I don’t know. It’s unbelievable. I’ve never seen anything like it,” he said.

Hanbidge pulled out his cell phone and started sharing the images of the huge shoal of fish with others.

“I FaceTimed my parents. They thought it was unbelievable as well, it’s crazy.”

The fish are called gizzard shad and they’re native to Ontario, with the Thames River being at the northernmost limit of their natural range, according to Michelle Fletcher, an aquatic biologist with the Upper Thames River Conservation Authority (UTRCA).

The fish have tightly packed this estuary like people crowding around a patio heater in the winter in search of warmth in the storm runoff, which is on average, eight degrees warmer than the river. (Colin Butler/CBC News)

She said while they are known to congregate in shallows and estuaries along the banks of Lake St. Clair and the Thames River every year, they haven’t been seen in this large of a number in London for nearly a decade.

“I did go back through old records and it seems like it was since 2012 that these kinds of numbers have been seen in the city.”

Fletcher said the reason they’ve packed themselves into the mouth of the small stream like sardines is because the shallow water is warmer than the river itself. Much like people crowd around a propane heater on a patio on a chilly night, these fish are trying their best to stay toasty warm.

“In the wintertime you’ll find them hanging out in the warmest spots they can possibly find,” she said. “That stream is 10 C right now. I measured it a couple days ago and in the main Thames, it’s 1 C.”

“That little creek is fed by the underground storm water system, they’re also found right now at the outlets for the water treatment plants, which are letting out water that is warmer.”

Chris Hanbridge spotted the shoal of fish and decided to share the scene via his smartphone with his mother and father, who were at home. (Colin Butler/CBC News)

She said experts still aren’t sure why there are so many of them this year.

“The best answer I’ve heard so far is that last year was a mild winter, so probably more of the shad survived.”

Fletcher said because there are so many of them crammed into one space, many of them have been injured, either by predators or just being pushed up against the rocks.

“They’ve been scraping themselves against different things when they scatter if they get scared.”

The fish have drawn a lot of attention, so much that the UTRCA went to the trouble of putting up a sign on the footbridge explaining what the fish are and why they’re there.

Fletcher said the conservation authority is talking with the city about putting up a permanent sign at the location since its so often frequented by the fish every winter.

“It’s very obvious the spot where they are, it’s very eye catching.”

“There’s so many people, especially this year, out walking along the trail. People are seeing them and they’re having questions of why they’re there so we’ve been trying to provide a little bit of information to answer those questions.”

Gizzard shad congregate along a narrow channel by a footbridge on the Thames Valley Parkway where storm water drains in the Thames River. (Colin Butler/CBC News) 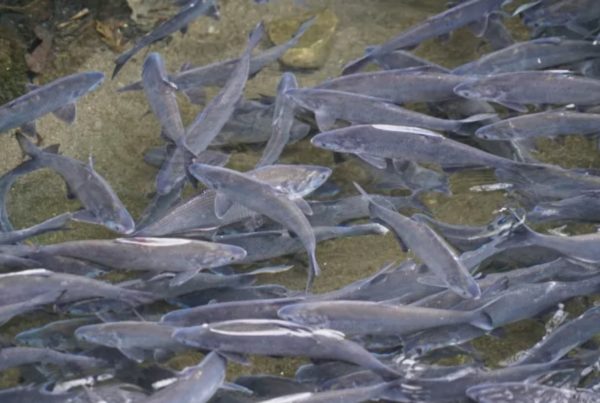