My friend’s Tony and Mitch and I fished on Lake Simcoe for lake trout on the weekend. We had a fun time and all got fish which is nice. Tough to beat a good day on the ice with friends and exercise. We fished the north shore of Lady Simcoe in hopes that we would find a good area with lake trout and few anglers. Kempenfelt Bay has a massive amount of anglers with sonars interfering with one another. The bite is typically slower after openers as a result of so much angling pressure and the short walk to get out to deep water. This is when putting in some leg work and walking further out at other locations can be good, but exhausting by the end of the day.

The ice conditions are improving, and will be much better with this cold snap. We still had slush with a skim layer of ice that we broke through in some areas, and other areas were fairly solid with a wet layer of snow. It made travel difficult, but we managed to walk out and set up. After marking only a few fish and no hook-ups at our first spot in 76 feet of water, we moved further out. Mitch drilled holes with his power auger and we tried for a bit without setting up the hut. After not marking anything in 10 minutes, we moved further out and tried another spot. Same thing, so we moved eve further out to 93 feet of water. We marked fish right away and set up my new Rapala Fat Shack. I am very impressed with this hut. It is much easier to set-up and take down from any other pop-up hut I have owned. It is a quality hut with heavy duty ice spikes. There is a lot of room, even for three grown men with all the gear. Mitch drilled 5 holes all across one side of the hut for Tony and I, and then tried a location a little further away. We kept in touch with two-way radios, and the plan was to figure out a good spot or technique.

After a few missed opportunities and chases on the Humminbird, I finally hooked a nice fish to break the ice. It was a great lake trout, and released after a photo. Mitch decided to join us in the hut shortly after, as his spot wasn’t producing the same marks on sonar. It was nice and roomy in the Fat Shack with all three of us which is amazing! With the added warmth, the holes don’t need to be cleared constantly, and re-tying a different presentation is much easier. We are spoiled now and have a hard time fishing outside unless it is really nice out. 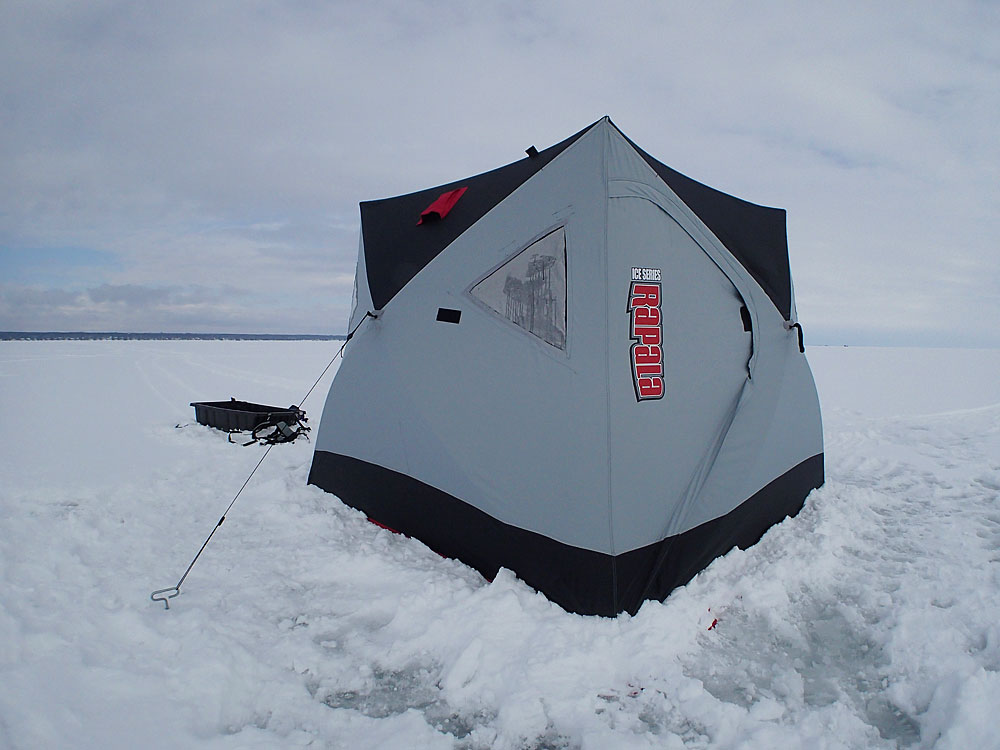 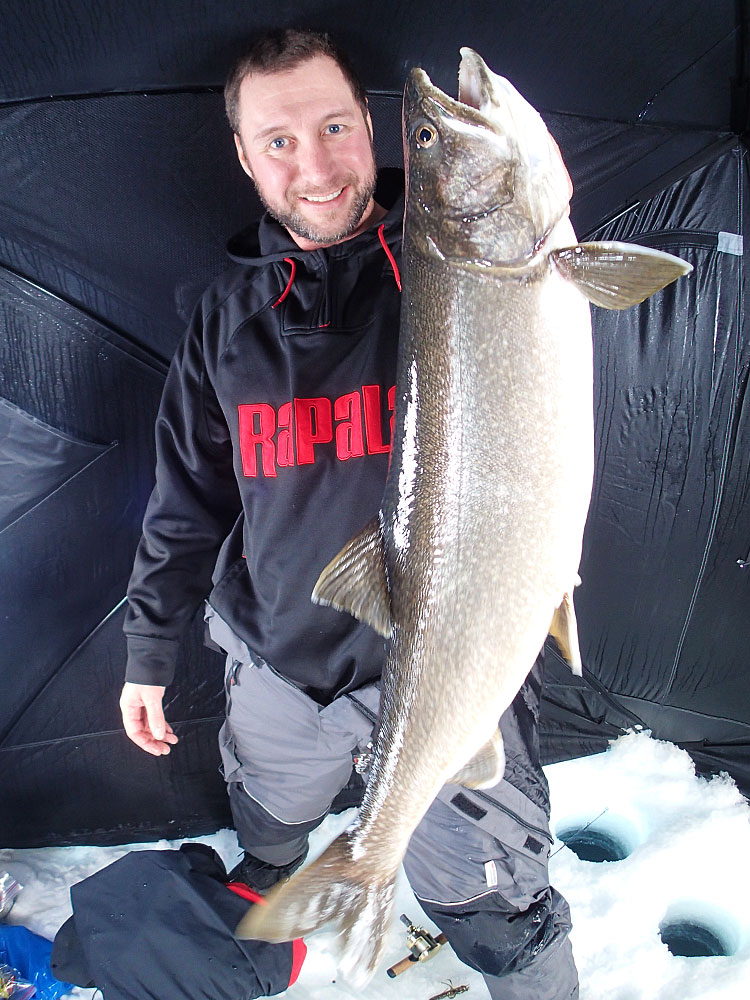 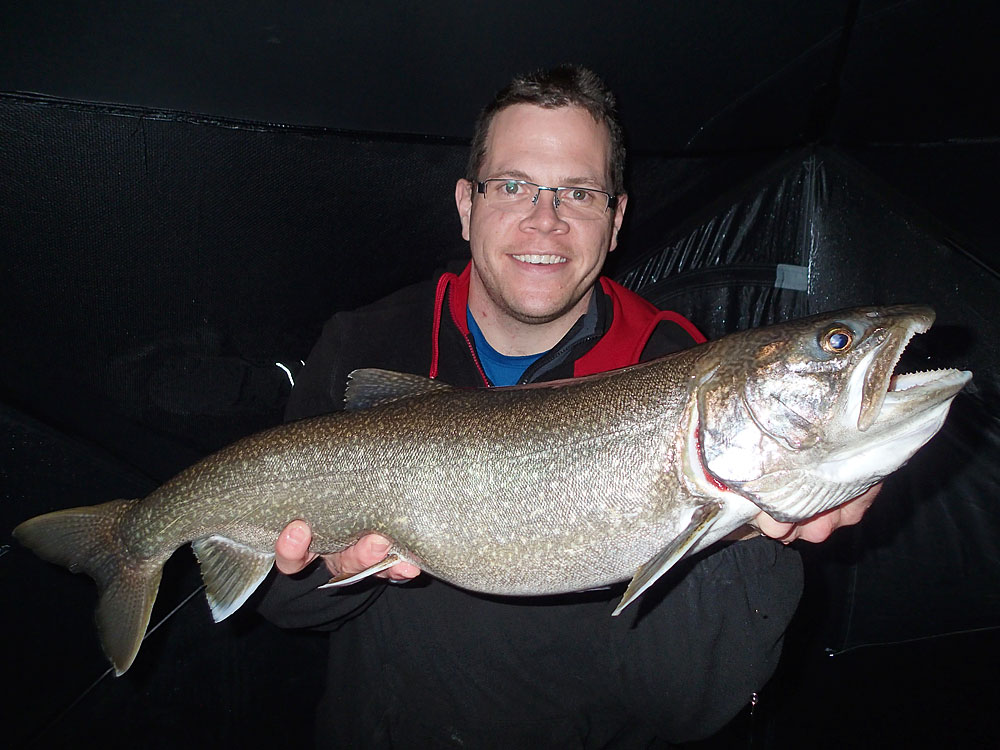 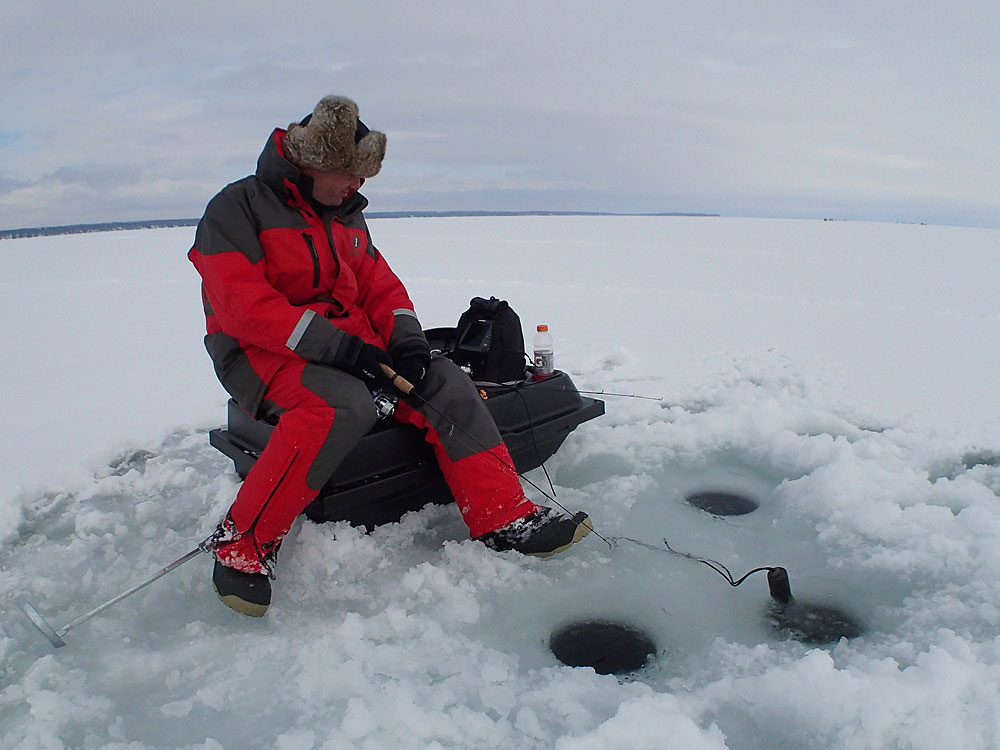 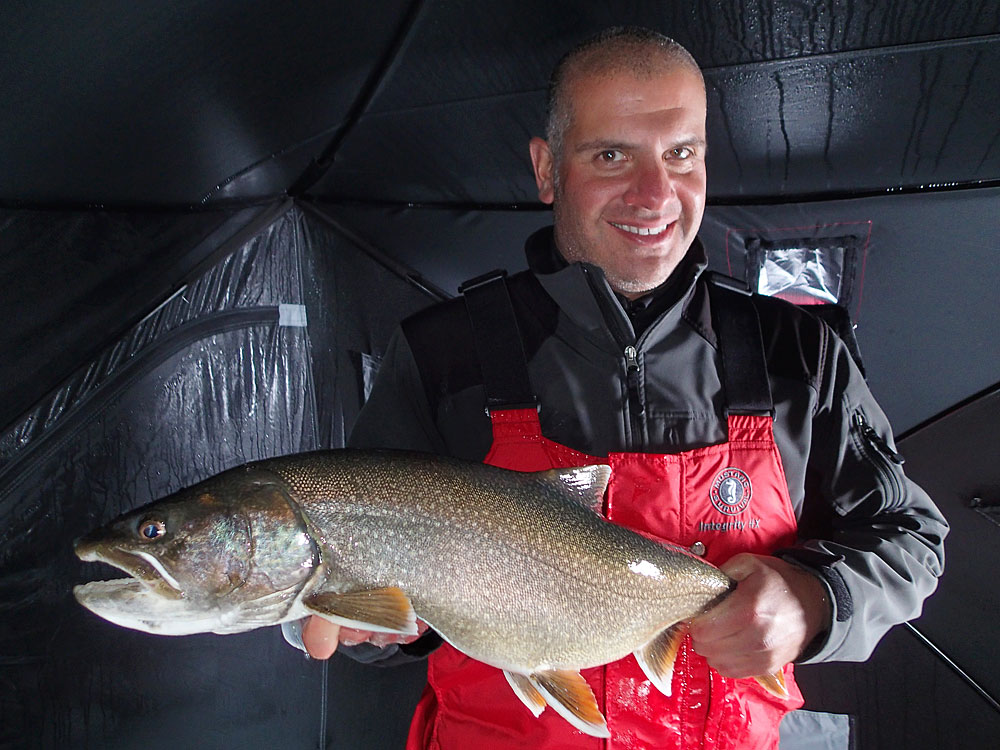 Tony was next with a nicely marked lake trout, followed by Mitch with a nice one. They all hit different presentations, and not another fish hit the same bait. Tony had another fish on that he lost and we had looks and a few chases on the sonar which were exciting, but ended in the fish rejecting our presentations. We headed back mid-afternoon on the long 3k walk back in. Tony was a champ and hauled in our gear all the way! I got off easy with just a couple items.

From what I hear, the whitefish are showing up on the south shore, and the lake trout fishing on the north shore has been tough. Good luck out there!