Posted on December 10th, 2020
Cooler manufacturer, YETI, has been included in TIME magazine’s annual Best Inventions – a list of 100 innovations ‘changing how we live’.

The Texas company, a regular at the ICAST fishing trade show in the US, was named in the outdoors category for its V Series cooler and was the only angling-related product in the 24-category list.

Each year TIME highlights inventions that are making the world better, smarter and, sometimes, a bit more fun. To assemble the final collection it solicits nominations from its editors and correspondents around the world, and through an online application process. It then evaluates each contender on key factors including originality, creativity, effectiveness, ambition and impact.

The result is a top 100 that this year also includes a hands-free toothbrush, a guide to cancer trials, a next-level action cam, a greener running shoe, a robot tutor, a vertical TV, hydrogen power for airplanes, a carbon negative way of making vodka and a solution for bedsores.

This is what TIME had to say about YETI’s V Series Cooler: “Lamenting that the gorgeous stainless-steel ice chests of mid-century have been cost-engineered nearly out of existence, the team at YETI decided to build their own, sparing no expense. The stainless-steel-clad YETI V Series is an $800 hard-sided cooler that weighs 35lbs empty and can keep 46 cans of beer chilly for many, many days after your last tailgate guests have left. Its secret is vacuum-­insulated panels, which keep the internal temperature lower for longer, yet allow for more space inside.

“Over the course of several engineering builds, we probably destroyed over a hundred samples,” says YETI Manager, Evan Goldberg. “The result might just last for decades.” 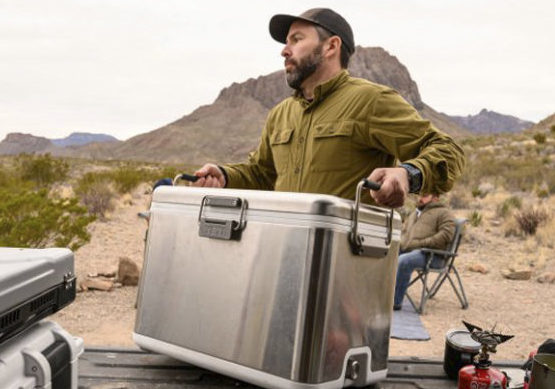