In January, Bonnier Publishing laid off 70 employees, including 30 in its Winter Park, Florida, office in the U.S. The move was called a “bloodbath” in some publishing circles, and it was shortly followed by the trimming of two outdoor industry titans—Field & Stream, and Outdoor Life. Print frequency for Field & Stream, which according to the New York Post is one of Bonnier’s most widely-circulated magazines, is being cut from nine issues per year to six. Meanwhile, Outdoor Life gets an even broader axe, falling from nine issues to just four.

The strike: Neither publication could be accused of navigating the digital transition seamlessly, but both have been stalwarts in the outdoor world for more than a century. They’re the grandparents of fishing magazines nationwide, and as such still carried a banner that demands respect. In an internet-fueled world where media is in higher demand than ever and outdoor recreation accounts for more than $370 billion dollars per year, the cuts put another spotlight on the struggle that legacy print publications have had converting subscription revenue models to digital income. The money is out there—but how do you get people to spend it when so much information is available for free? That’s a riddle pondered in publishing offices across the country, and—apparently—at Field & Stream and Outdoor Life.

(as reported in Tackle Trade Retailer) 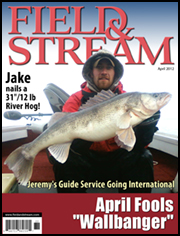 This entry was posted on Monday, February 26th, 2018 at 12:00 pm and is filed under News. You can follow any responses to this entry through the RSS 2.0 feed. Responses are currently closed, but you can trackback from your own site.