The Great Lakes are turning into giant “dead zones” like the Gulf of Mexico and the Atlantic. If we don’t change the way we grow food, we will destroy 1/5 of the world’s fresh surface water and all the fish in it.

The depressing images make it clear that our “civilized” lifestyles (primarily our unsustainable farming methods) are creating gigantic aquatic “dead zones” in not only our oceans, but our lakes as well.

Dead zones are where oxygen levels are so low no aquatic life can survive.

“Almost 40 million Americans and Canadians live in the Great Lakes watershed. We drink from the lakes, fish on them, transport goods over them, farm their shores, and work in cities that wouldn’t exist without the lakes. The Great Lakes helped make the U.S. an economic powerhouse. “

But the lakes are quickly becoming polluted, lifeless and useless as the very activities that enriched the region are now destroying their cash cow.

Primary among those activities is agriculture.

The Great Lakes are surrounded by 28 million acres of soybean, corn and hay fields. Most of those fields are managed using intensive mono-cropping methods, which means a single crop, grown in rows for miles on end.

Each year the soil is plowed, the bacteria killed, the nutrients in it released, and then it is artificially fertilized with tons and tons of mostly synthetic fertilizers and sometimes manure from factory farms.

Because the soil is so dead, lifeless and non-absorbent, much of the fertilizer runs off into streams and rivers and then into lakes and oceans every time it rains.

The fertilizers introduce unnaturally high loads of nutrients into lakes and oceans that create giant algae blooms that suck all the oxygen out of the water and block sunlight from deeper waters, killing fish and other aquatic life.

Their Midwestern factory farms and mono-crop fields used to feed their animals are no doubt contributing to the dead zones in the Great Lakes as well.

Not only does this type of pollution destroy drinking water and fish, it also poisons nearby land animals and birds, who drink from the waters, National Geographic points out. 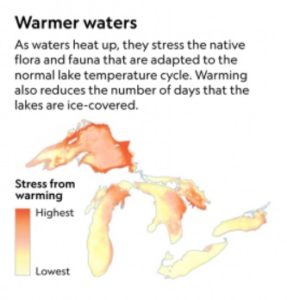 On top of that, it robs our air of oxygen.

“Everyone calls the Amazon rainforest the lungs of the world, but it’s actually the diatoms in the oceans, rivers, and lakes of the world that make about half the oxygen in our atmosphere,” Andrew Bramburger, a lake ecologist with Environment and Climate Change Canada, tells the magazine.

Diatoms are a type of algae that produce oxygen in the lakes that are destroyed by the toxic algal blooms.

The solution? Many ecologists agree the answer is small-scale, organic, bio-dynamic farming that includes methods that regenerate the soil instead of destroying it, such as composting, not tilling the soil, using cover crops, planting and diversity of crops and rotating them.

The question is whether we can turn convince the owners of mega-farms to the Titanic around fast enough. 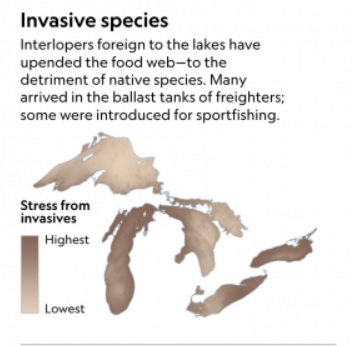