I had an opportunity to take my family out for a very quick perch fish yesterday on Lake Simcoe out of Gilford. My son is almost 5 years old and could have stayed out much longer, but my 2-year-old daughter didn’t have the attention span. She asked me to take her fishing a few days ago, so naturally I obliged! With really young kids, I believe that it is important to take short trips, even if that means driving for over an hour, walking out on the ice for 30 minutes, and only fishing for 30 minutes.

We arrived with approximately an hour before dark, and we tried to get the kids out as quickly a possible. The walk was difficult due to a layer of bad ice on top of the solid ice. Some areas were ok, but others were bad as we broke through a slushy layer each step. The machines buzzing around helped to make the bad ice areas even worse. Under the slushy layer of ice was at least 6 inches of good ice, so the ice was safe, just messy and wet to walk on in some areas.

We took a quick break in shallow water and drilled a couple of holes and started fishing, but we didn’t get a bite, just weeds. I knew the perch fishing would be good in 25 feet of water or deeper, but it wasn’t feasible to walk over a mile out. We were able to get the kids out to approximately 20 feet of water, where a kind gentleman was just leaving. After a brief conversation, he let us know that there were a lot of small fish in the hole he was leaving and they were on the bottom hitting minnow heads. small perch would be perfect for the kids.

I noticed some dead minnows on the ice, so we tipped a Jigging Rap with small chunks of minnow and dropped to the bottom. My son was right into it while my wife and daughter opted to build a snowman lol. After a short period of time, my son and I got into some small perch. My daughter tried fishing briefly before playing in the snow again. It started to get dark shortly after we got out there, and by the time we got back to the truck, it was completely dark. It may have been brief, but it was really nice to get my wife and kids out onto the ice for some perch. They enjoyed it, as did I. 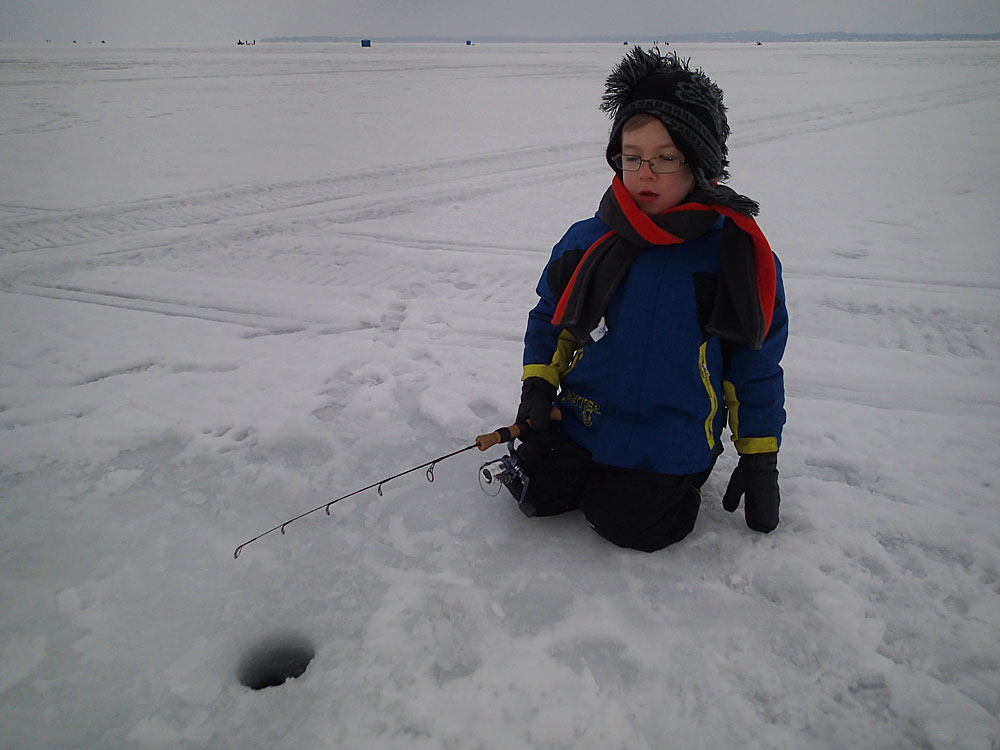 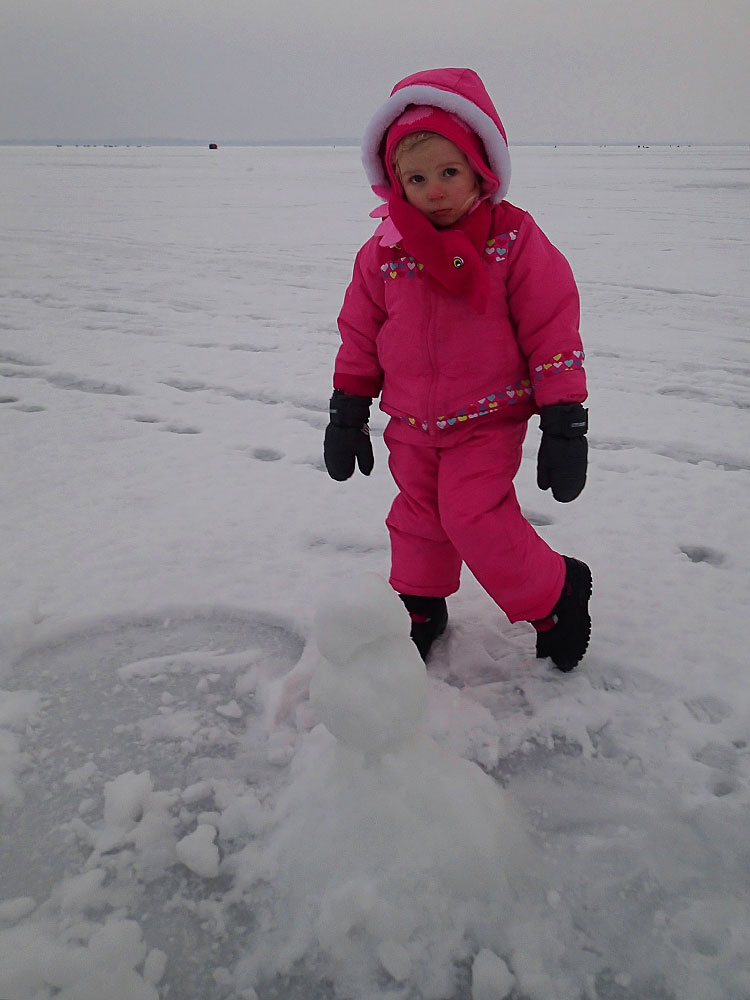 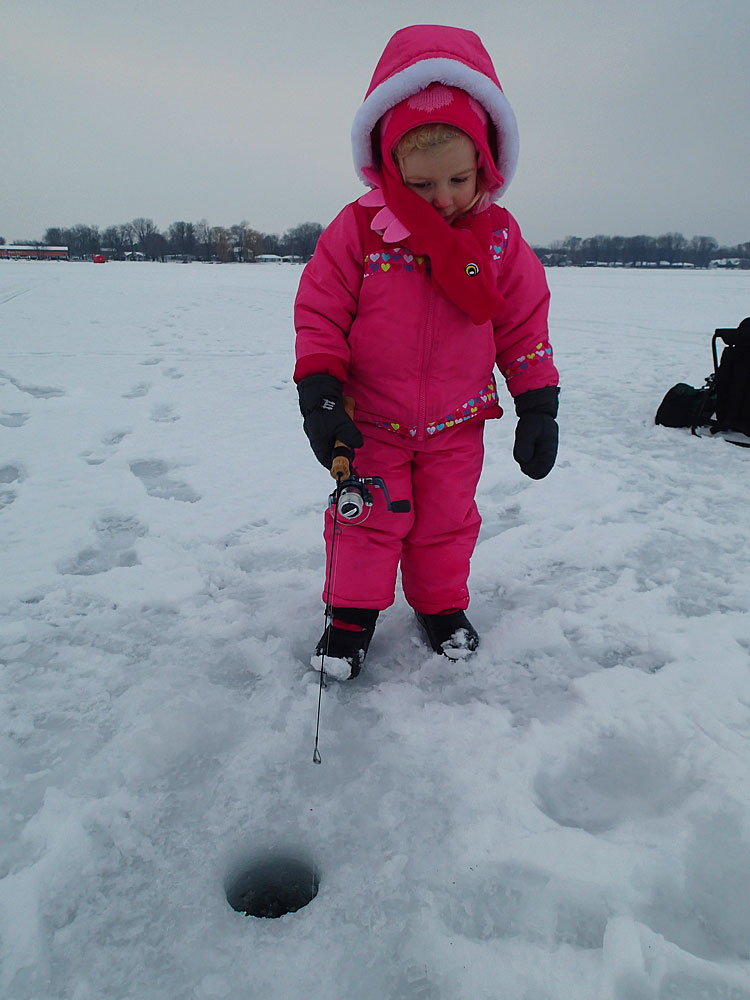 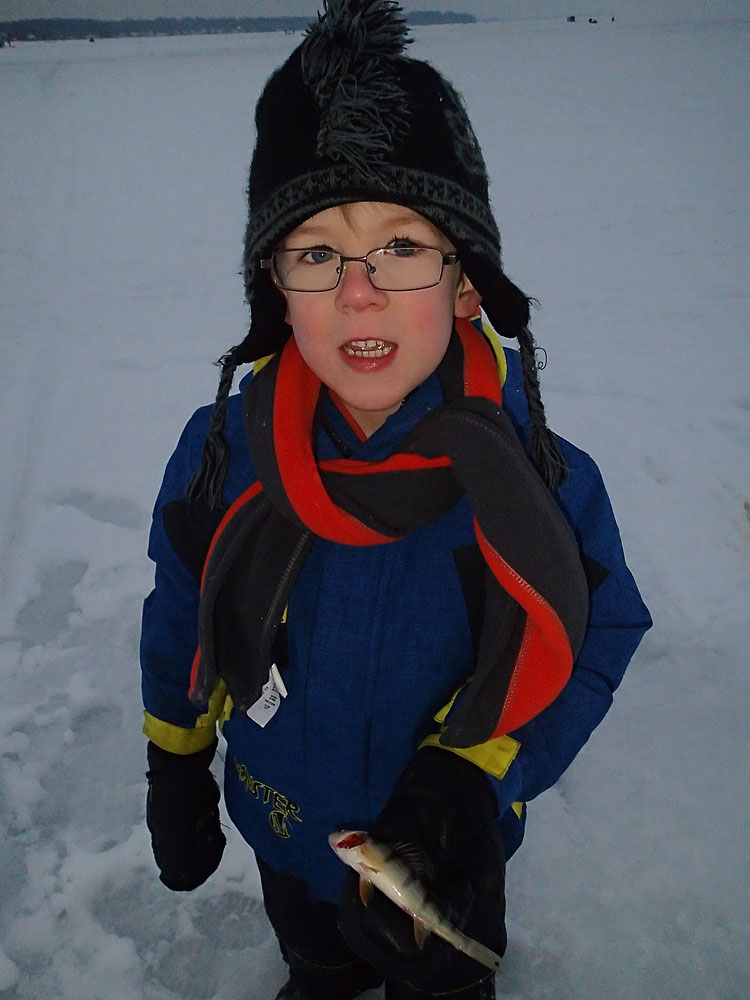 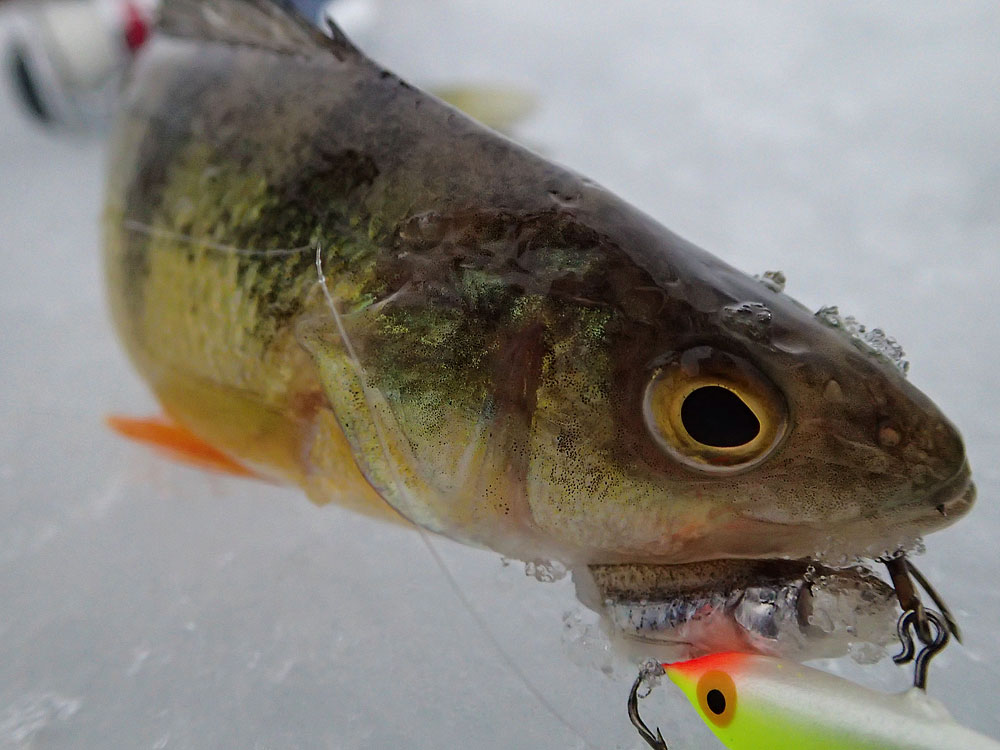 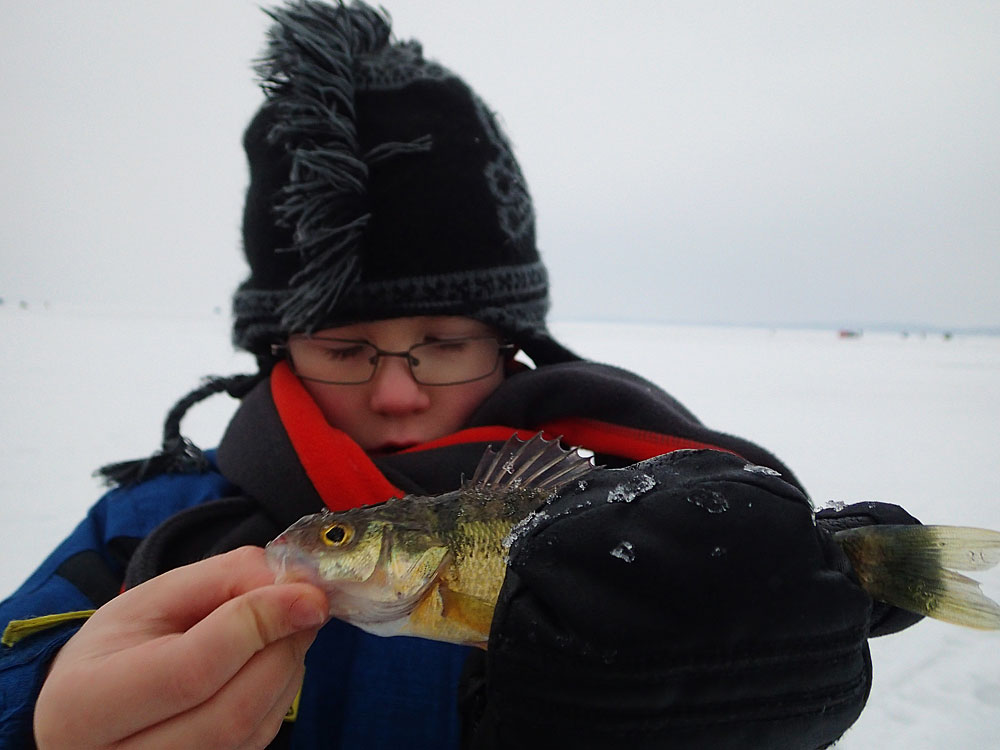 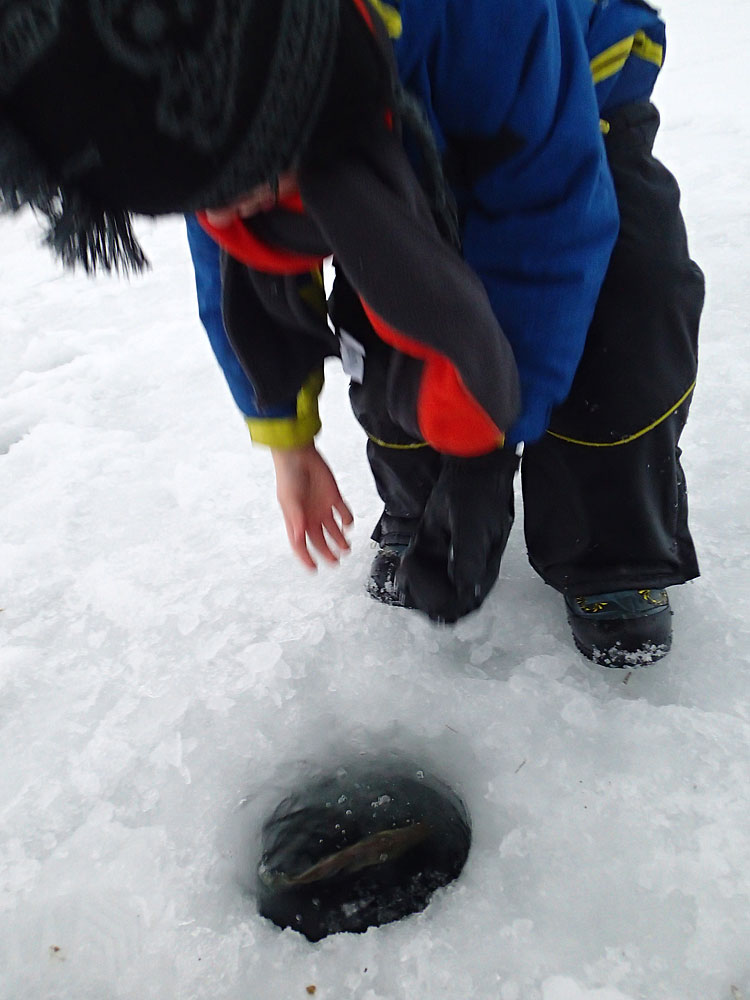 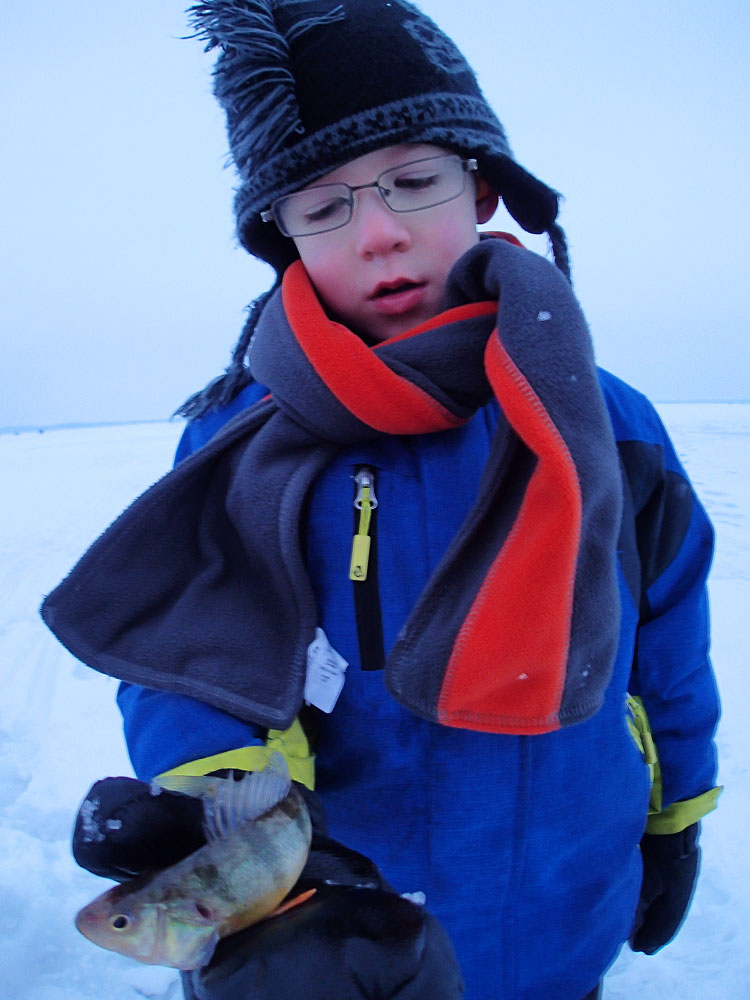 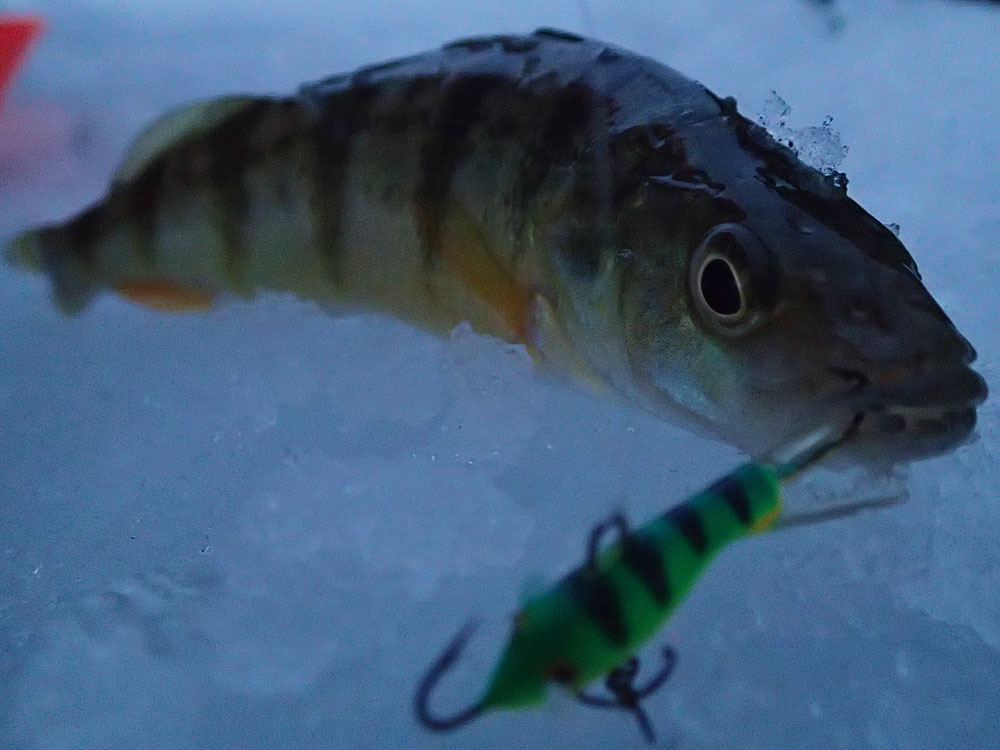 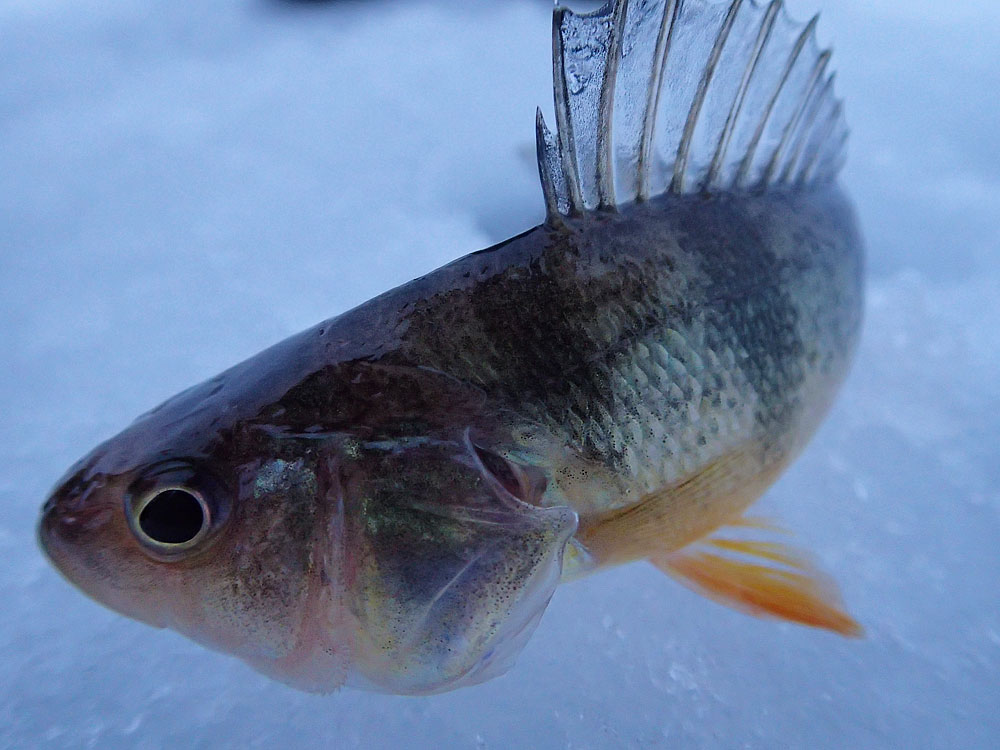 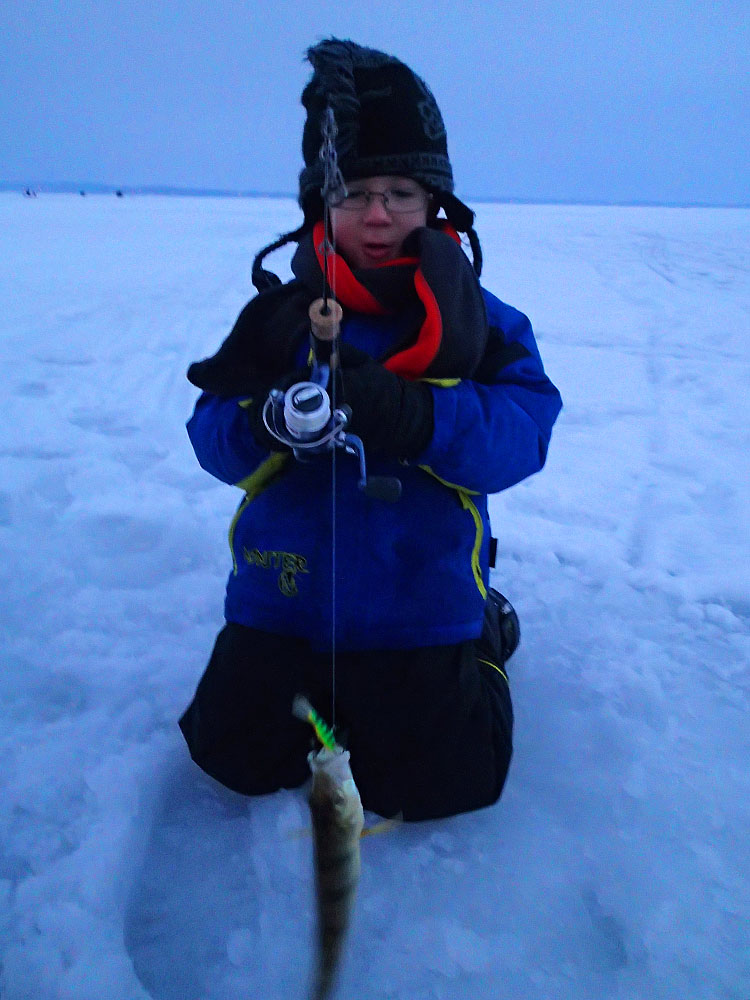 I was able to try out my new Christmas present from my family, a new compact waterproof point and shoot camera. It is the Olympus Tough TG2. I got an adapter ring and circular polarizing filter accessory for it. I am just learning the camera, but I am impressed with it so far. I should have taken off the filter in the low light conditions.  I look forward to learning the abilities of this camera and taking underwater photography!

From what I am hearing around Lake Simcoe, perch fishing is on fire around several areas of the lake with many 7-10 inch perch being caught, and a bunch of jumbos mixed in from 10-12 inches. They are biting on emerald shiners, Jigging Rapalas and soft plastic minnow imitations as well. There is only 3-4 inches of ice in some areas, and 5-7 in other areas, so be careful out there!