ERIE, Pa. — Two years into a three-year study of Lake Erie walleye migration, researchers are finding a population explosion of fish living year-round off the lakeshore in Pennsylvania and New York.

The findings about the fish’s eastward migrations have confirmed previous studies conducted off Ohio and New York and confirmed the suspicions of Fish and Boat Commission biologists. The new information could change the way anglers fish when the season opens May 2.

At a daylong Great Lakes Walleye University seminar in March, the most impressive moment was a big-screen video animation illustrating the widespread movements of tagged walleye. Red markers originated in Lake Erie’s western basin spawning waters off Toledo and flowed north and as far eastward as Buffalo before curling back to Ohio waters, as expected.

However, another bloom of markers erupted in waters off Lake Erie’s southeastern shore. The red marks spiraled northward to the deep cold escarpment off Ontario’s Long Point and east to near-shore shallows off Pennsylvania and New York, waters famous for their smallmouth bass.

Resident walleye don’t participate in the great annual migrations that take waves of the fish throughout Lake Erie. They can be caught anytime  in Pennsylvania waters.

“These fish?” said Mark Haffley, circling the moving markers of the eastern bloom with a laser. “They shouldn’t be here. We thought they were there, but couldn’t prove it.”

Mr. Haffley, a Fish and Boat fisheries biologist, traced a smaller oval highlighting a cluster of markers that moved little and hugged the shallows off Pennsylvania and New York.

“This is new,” he said, retracing the oval for emphasis. “Of the walleye that spawn here in the eastern basin, 27% stay here. They’re permanent residents, never moving far. These are our walleye.”

The video presentation at the seminar, which was sponsored by the Lake Erie PA Charter Boat Association, was part of a high-tech study of resident walleye of eastern Lake Erie. The research is changing long-held notions.

Western basin walleye generally do not join in the May migrations until their third year. Nevertheless, April spring trap net surveys in waters off Erie County were finding a growing number of young-of-year walleye. That and tagging surveys conducted in Ohio and New York suggested that large numbers of walleye were spawning in the east.

In the decade since those tagging surveys, federal agencies have installed an underwater sensor grid crisscrossing the 9,990-square-mile lake at 15-kilometer intervals. In 2018, Fish and Boat partnered with several Pennsylvania nonprofit fishing groups to fund a telemetry study that uses the grid to track devices implanted in the fish to chart their movements.

“If we had started our study in 2010, with Ohio and New York, we wouldn’t have any of this,” said Mr. Haffley, who leads the study. “One of the things that’s exciting to us is we do have incredible spawning sites available [in Pennsylvania]. Walleye return right back to these same exact spots where they were caught and tagged the very next year.”

The study’s third and final season began with the collection of east basin walleye this month.

“What we know so far is that a near-shore east basin community is real, and we’ve learned some things about them,” he said. “Unlike the west basin fish that spawn in April, most of these walleye spawn in May. … The second thing we learned, the eastern basin walleye population is growing. Spawning conditions are improving in Pennsylvania and New York waters.”

The eastern fish behave differently than their Ohio cousins. Temperature changes in the shallow western basin force forage fish to seek cooler waters to the east, and the walleye follow. Eastern residents don’t have to move as far to find food.

“Some travel — one even migrated backward to the west basin — but a lot of them never go as far [north] as the first or second trench. Some never go deeper than 30 feet.”

With that information, it is reasonable for anglers to tweak their tactics.

In 2020, Lake Erie walleye density is expected to remain high with a lot of undersize throwaways. Instead of waiting until June for the first wave of western migration to cross the Ohio line, anglers could begin targeting resident walleye from North East, Pa., to Dunkirk, N.Y., as soon as the season opens.

Walleye fishing is no longer a game for charter captains and anglers with larger seaworthy vessels. Many of the near-shore fish spend their lives in relatively shallow waters accessible to just about anyone with a boat. At some spots, walleye can be caught from shore.

“You’ve driven over tons of [walleye] getting to the fish that you wanted to catch,” Mr. Haffley said. “These near-shore areas are famous worldwide for smallmouths. Bass anglers catch a few walleye, and those areas are full of other fish — white bass, white perch, yellow perch, sheepshead, catfish. Everything is in there, so it wasn’t thought of as a high-percentage walleye area.”

Most bass anglers target smallmouths with soft-plastic tube baits, which aren’t as attractive to walleye. The other fish favor tipped jigs and live baits. The new data suggests that walleye in those near-shore waters could be targeted by trolling or drift-fishing typical walleye lures — worm harnesses, Erie Dearies and other spinners.

Near-shore anglers may have to rethink what they know about water temperature. Conventional wisdom says when the water warms up, fish deeper. Late summer anglers follow walleye to 70, 90 feet and deeper. But Pennsylvania’s near-shore residents never go there. 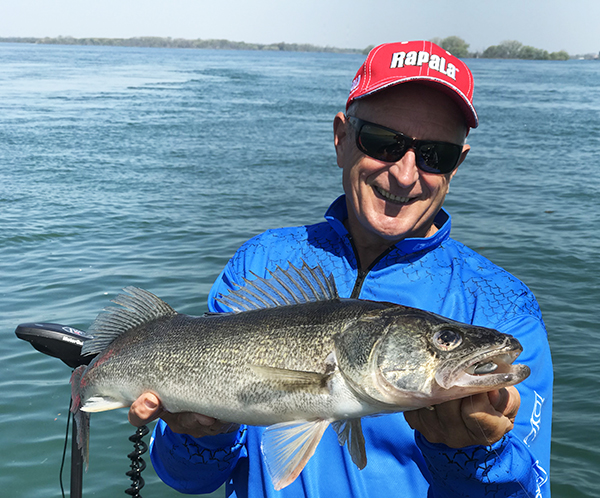