Discovery Islands, BC salmon farms to be phased.

The controversial open-net salmon farms in the Discovery Islands near Campbell River, B.C., will be phased out over the next 18 months.

In making the announcement, Fisheries Minister Bernadette Jordan said all 19 farms have to be free of fish by June 30, 2022, when their renewed 18-month licences expire, and that no new fish can be brought in.

Jordan said the decision was difficult but reflects the consultations she had with seven First Nations: the Homalco, Klahoose, K’ómoks, Kwaikah, Tla’amin, We Wai Kai and Wei Wai Kum.

“We heard overwhelmingly from First Nations in the area that they do not want these fish farms there,” she said. “They feel that they should have a say in their territorial waters, and I absolutely agree with them.”

Chief Darren Blaney of the Homalco  First Nation said he was pleased with the outcome, noting the cultural importance and significance of salmon to his nation.

“[Wild, local] stocks have been declining over the years,” Blaney said. “Salmon are pretty resilient. I think if we give them and opportunity, they will start to rebuild.”

For years, critics of the farms have said they are contributing to the collapse of wild Fraser River salmon stocks because sea lice and other pathogens transfer from the farms to migrating juvenile wild salmon as they swim through the narrow channels to get to the ocean.

Bob Chamberlin, chair of the First Nations Wild Salmon Alliance, said his group was also pleased with the decision.

“People have become aware, not only of the critical state of wild salmon in British Columbia, but what threat the fish farms operations, as they currently are, pose to wild salmon runs,” he said.

The B.C. Salmon Farmers Association says the decision puts salmon farming in B.C. and across Canada at risk.

“This comes at a bad time, during a pandemic when local food supply and good local jobs have never been more important,” the group said in a statement.

“We have just received this decision, and will be taking some time to consider it and speak with the numerous companies and communities involved in salmon farming in the province before commenting further.”

In September, 101 B.C. First Nations and their supporters called for the removal of the Discovery Islands salmon farms, asking they be moved to land-based closed-containment systems.

One week later, Department of Fisheries and Oceans scientists said the current farms were “minimal risk” to Fraser River salmon based on nine separate peer-reviewed risk assessments. Sea lice was not considered in the studies.

“Discovery Islands is one area, it’s not an indicator of how everything is going to go,” she said.

She said the 18-month period allows for the three million farm salmon in the pens to grow to harvestable size.

She expects 80 per cent of the fish will be gone by April 2021, in time for the start of the next Fraser River out-migration period.

Currently, nine of the 19 farms are fallow with no fish in their pens.

Fraser River salmon returns are at a historic low this year with only 270,000 expected. 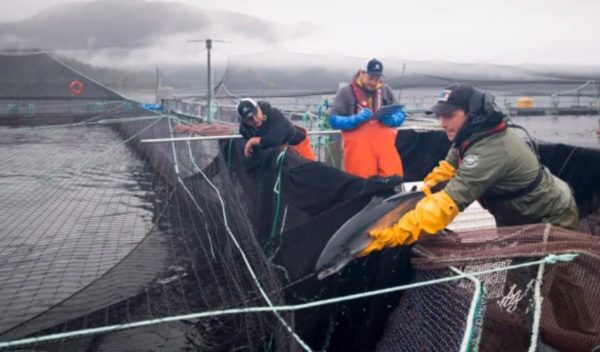