You know I have a passion for fishing,  I love to eat fish & have dedicated my carrier at educating anglers.

Many people think that fish caught from the Great Lakes and other waters of North America should not be eaten due to contaminants. Instead they purchase farm raised fish from Asia. Presently two of the most popular fish sold in high volume in North America both through grocery stores and at restaurants are: tilapia and “Basa” (freshwater catfish). Please watch this video link below when you are done reading. I have traveled to Thailand twice, I have been on the Mekong River as far north as the Laos, Miramar, Thailand border. The video is accurate. 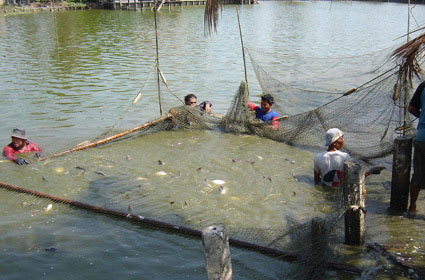 As a side note, North American farm raised cold-water fish that include; Pacific Salmon, Atlantic Salmon, Arctic Char & rainbow trout may contain up to 3-times the contaminants of the same wild-caught fish. The reason for this is that the food fed to farm raised fish is unregulated. Fish growers try to achieve a 1-to-1 growth ration in fish farming. Ideally they want to feed a fish 1-pound of food and have it gain 1-pound of weight. To achieve this the food has to have a high-percentage of fat. The fat is extracted from other fish and mixed in most cases with a emulsifier and a bulking agent (like soya meal). The result, fish pellets. The problem is that heavy metals and other carcinogens accumulate in the fatty-tissue of animals (including fish). When you extract the fat (oil), you extract most of the contaminants and in-turn those are fed to the farmed fish.

I have personally attended an Agriculture Canada symposium where the Canadian government analyzed Canadian farm raised rainbow trout and came out with the findings above. They suggested to all the Ontario Aquaculture growers that they should advise the public not to eat more than 350 grams of fish once or twice a month. The Aquaculture growers in attendance were furious. The findings were never make public.

One of the safest North American farm raised fish to eat is the catfish grown in the US. Their feed consists highly of processed corn and the fish taste good. You may not like the sound of purchasing American “catfish”, but actually it is better tasting than the current very popular imported fish that goes by the name of “Basa” (Asian freshwater catfish).

Please share this valuable information with people you know that enjoy eating fish so that they can make their own decision on which fish they should consume.

The video link is, https://www.youtube.com/embed/h1nEPzsFpc0?feature=player .

I will continue to eat what I catch!