The future of two of North America’s biggest fishing retail chains has come under mounting speculation. US trade magazine, Fishing Tackle Retailer (FTR) is reporting that Cabela’s, said to be a takeover target of Bass Pro Shops, is set to sell its profitable credit card business. It has also been revealed that its retail rival, Sports Authority, has made 100 headquarters staff redundant after missing an interest payment on a $343m loan. FTR writes on its website that according to LowCards.com, a credit card news outlet, Cabela’s is trying to sell the business before selling off the company altogether. It adds that Bass Pro Shops is not interested in Cabela’s credit card portfolio despite the fact that its sales represent about 30% of the Nebraska-based retailer’s transactions. In December Cabela’s announced that its board has begun exploring a range of ‘strategic alternatives’ to enhance shareholder value – including its sale. The redundancies at Sports Authority’s Englewood, Colorado, base were confirmed last week. A spokesman said: “While this action was difficult, we believe it was a necessary step in our plan to return Sports Authority to long-term profitable growth.” After going private in a leveraged buy-out nearly ten years ago, the business has struggled to increase its revenue. According to a report from Bloomberg, the company announced annual revenues of around $3.5 billion and was listed as one of America’s largest private companies in 2016. The sporting goods retailer is said to have nearly half of its debt to refinance and has a $343 million loan due in May 2017. It has hired restructuring advisers.
News 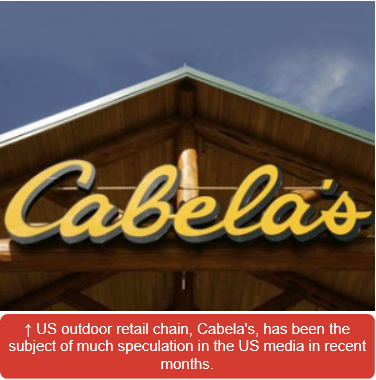 This entry was posted on Thursday, February 4th, 2016 at 10:43 am and is filed under News. You can follow any responses to this entry through the RSS 2.0 feed. You can leave a response, or trackback from your own site.