Mid-April in southern Ontario is prime time to catch Brown Bullhead catfish. These fish move in by the thousands into shallow, mud-bottom bays throughout the Lake Erie & Lake Ontario shorelines and also into the mouths of rivers & streams as well as any marshy areas and most soft-bottom marina basins.

They swim around in tight schools which in clearer water will look like a big dark cloud. Brown Bullhead are voracious feeders pre/during/post spawning and can be easily caught just fishing a nightcrawler on a #6 baitholder hook with a couple of split-shot sinkers or using a “pickerel-rig”. 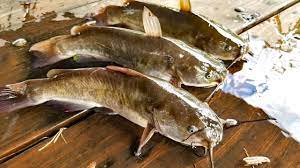 The average water depth to locate them is 2-5′ and they can swim to within a few feet of shorelines.

Good locations on the Lake Ontario shorelines are: