PORT CLINTON – Even as fishing in the “Walleye Capital of World” has certainly been living up to its name over the past two years, experts are projecting it could be on the verge of getting even better.

That capital, of course, is none other than Lake Erie, or even more specifically, its western basin, where the walleye population is reaching what scientists have described as “unprecedented” heights and is leading to incredible catch rates for anglers.

“Walleye fishing has never been better,” said Travis Hartman, a biologist with the Ohio Department of Natural Resources’ Division of Wildlife, about western Lake Erie.

Hartman serves as the Lake Erie fisheries program administrator, which monitors fish populations, along with production and harvest rates, aiming to establish appropriate and sustainable daily catch limits for sport fish such as walleye in partnership with other neighboring state agencies, including Ontario, Canada.

“Interagency management is the key to sustainability,” Hartman said. “We’re fortunate to have such cooperative partners around the lake.”

As part of that partnership, researchers conduct fish surveys in Ohio’s and Ontario’s territories in Lake Erie and combine their data to estimate the lake’s total populations, measure their ongoing rate of production and make projections for upcoming years. 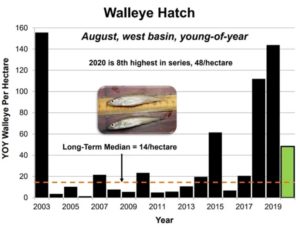 Researchers use trawl nets, similar to the one pictured here, to measure the annual walleye hatch by catching “young-of-year” fish, meaning newly hatched walleye that are less than a year old.

The annual walleye hatch surveys are performed with trawl nets, which are used to catch “young-of-year” walleye, meaning newly hatched walleye that are less than a year old.

Hartman explained that up until very recently, 2003 had been talked about as having the biggest hatch ever seen, which was described as “the hatch that saved the fishery” and carried it for over 10 years.

“We were really fortunate to get it. It was kind of our anchor point to compare things against,” he said.

Now, however, the last few years have apparently kicked off a whole “new era” of walleye production.

Although 2020 is the smallest of those four examples, it is still considered another great hatch. 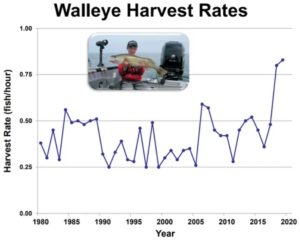 “Prior to 2015, I’d have been doing jumping jacks over our catches this year for young-of-year walleyes,” Hartman said. “We are in an incredible period of production.”

While the young-of-year walleye hatch in 2020 was lower than the previous two in 2018 and 2019, it is still considered a very productive hatch. Together, the recent hatches are leading to the highest walleye population estimates ever for Lake Erie in 2021.

While Lake Erie’s record high water levels in recent years have plagued some communities along the western coast, such as the city of Port Clinton, with frequent flooding — it also appears to be one of the most significant contributing factors to the booming walleye production.

“It’s becoming clear to me that high water is very helpful in producing walleye,” Hartman said. “If you look at the ‘80s, we had very high water. If you look right now, we’re in that same type of high water scenario, actually higher.”

He said he does not yet know precisely what dynamics associated with the lake’s high water levels cause the increase in walleye production, but speculated about the possibility of more sustained plankton blooms that walleye larvae need to eat or, perhaps, currents bringing larvae inshore, potentially putting them in nursery habitats and a better chance of surviving.

“The bottom line is, when we have high water, we’re producing a lot of walleye,” he said.

“But these last years have shown, we don’t have to have a hard winter,” Hartman said. “When you look at the west and you look at production, high water trumps everything.”

Biologists are predicting Lake Erie’s walleye population to reach a record high of 151 million in 2021.

Using 2003 again as a point of comparison, that year’s hatch helped the lake’s walleye population top 120 million in 2005, which Hartman said was comparable to the population level at their best during the 1980s.

Lake Erie then entered somewhat of a period of decline for walleye. According to Hartman, the lake simply did not get hatches like that of 2003. That is until recently.

The walleye harvest rates in Lake Erie have reached record highs in 2019 and 2020, according to the Ohio Department of Natural Resources Division of Wildlife.

That high population is also manifesting in high harvest rates for walleye, a statistic that has been tracked in Lake Erie for around 40 years.

“Things were as good as we could’ve ever hoped for back in the ‘80s, when we were at a half a fish per hour as far as the targeted walleye harvest rate,” Hartman said.

After that period, as populations changed and the fishery changed, catch rates were generally lower.

It was not until 2006 and 2007 that catch rates rose to high levels again, when walleye from the big 2003 hatch were so abundant, Hartman explained. The rates then declined again until skyrocketing recently.

“We’re at a point now where our harvest rates are approaching double what they were in the ‘80s,” he said.

Hartman can remember experiencing how great of a fishing period it was as a kid at that time.

“For a long time, we looked at the ‘80s as something we might never achieve again from a fishery perspective, but it is this good right now — these are the good old days,” he said. “We really have something special right now for a walleye fishery and I encourage everyone to experience it and enjoy it.” 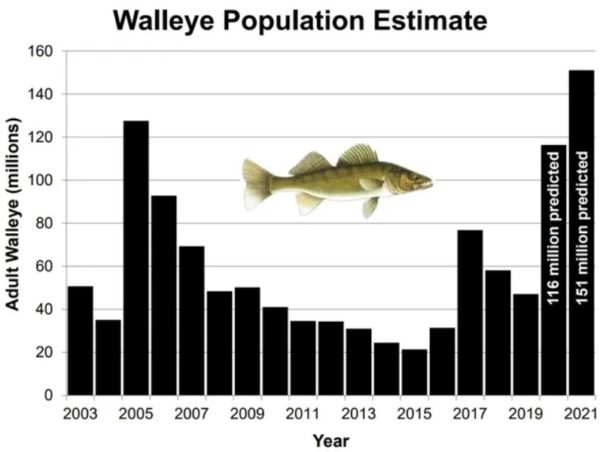