Un-boxing the Bait2Go Holding System was very exciting. The product is well made. It is heavier and more durable than I had initially thought it would be. What may have appeared in the online photos as lightweight, ended up blowing me out of the water!

The product is built to last and performs as advertised. When the manufacturer states that the Bait2Go can be attached to nearly any object/surface, they really aren’t kidding. You can literally fish from the seat of your car!

Serious thought and ingenuity went into the simple, yet complex, design of this product. Genius really! The cup-like bait holder is designed to affix to most surfaces. With that being said, attaching the suction cups should be well thought out prior to entering any water.

*Under most conditions, the Bait2Go would float.

I eagerly attached the system to the kayak, added bait and with ease accessed the nightcrawlers one handed.

Wow! What angler out there would disagree to having a free hand for the unexpected hawgs on the other end of their lines? That’s a huge plus, in my opinion.

The inventor of this product adds the convenience of a bottom lid. With the addition of live bait, the versatility becomes endless. You now have the ability to substantially increase the longevity of minnows, leeches and baits that need oxygenation while saving money and the earth! Can you say WIN WIN!?!?

Another great way to utilize the Bait2Go is through storage. I have kept my worms in the Bait2Go and the remainder of the unused worms stay alive and well after three days on the coldest shelf in my refrigerator. Ordinarily, the worms would freeze in the Styrofoam containers.

One of the best features of this product, is the sliding basket that is neatly nestled within the cup’s design. This is a great design detail for one handed operation.

Bait2Go Bait Holding System is a good product with a nice price. In my opinion, this product is great for all ages. My family found the product fun to use and just easy to operate, especially one handed.

I love my Bait2Go Bait Holding System and will use it often without a doubt! 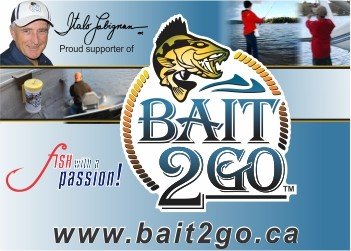