Alouette Lake boaters may be left high and dry

Boaters who use Alouette Lake could be left high and dry in future summers.

The water level of the popular lake in Golden Ears Provincial Park may drop dramatically for two or three summers, beginning in 2023, as BC Hydro does work on its infrastructure. It is one of the most visited parks in the province, by both campers and day users.

Hydro is considering three options which include either lowering the lake levels, or increasing flows on the South Alouette River, or a combination of both. At least one option would still allow boaters to access the boat launch.

After reviewing the proposed work, the Maple Ridge-based Alouette River Management Society (ARMS) is asking Hydro to use the opportunity to build a fish ladder, and restore salmon runs to what they were before the Alouette Dam was built in 1928.

The options Hydro is considering are:

Hydro says during normal operations, the minimum reservoir elevation ranges from 121.25 to 122.5 metres to support recreational use of the reservoir. It would need to be dropped to 116m during construction if the river levels are kept at normal, or 118m if the river flows are increased.

There is a tunnel between the Alouette Lake and Stave Lake Reservoirs that must be upgraded to withstand a major (one-in-10,000 year) earthquake. The tunnel, located 16 km northeast of the dam, must be drained and removed from service during construction.

The need for this work, and the drawing down of the reservoir, was first reported in October 2019.

“While we recognize the impact this will have on recreational users to Alouette Lake Reservoir, unfortunately, for safety reasons the work must take place during the summer months when inflows to the reservoir are lowest, and most predictable,” said Hydro spokesperson Tanya Fish at the time.

“ARMS has been fighting for more than 25 years to convince BC Hydro to manage the ecosystem properly,” said a letter to Hydro from society president Ken Stewart. “A critical component of restoring the ecosystem health to as near as normal as possible is the provision of permanent fish passage around the Alouette Dam.”

“While the builders of the original dam and powerhouse may be given some consideration for their decision to wipe out the salmon runs even though it was base on the misguided belief of the time that there were endless salmon, 90 years later we know better,” he wrote.

“The planned Alouette seismic upgrades provide the perfect opportunity to correct a historic mistake and create a healthy, salmon-bearing river.”

ARMS also asked Hydro for information about what impacts the drawdown would have on resident fish in the lake and river.

Hydro plans to select one of the three options by this spring. The company is in the middle of a consultation and evaluation process, taking feedback from stakeholders and First Nations. There will be a virtual information session on Jan. 27 from 6:30-8:30 p.m. on Webex. See their bchydro.com website for more information, or to pre-register for the session.

Hydro will consider environmental, recreational and operational impacts, along with schedule and cost considerations before making a final decision. 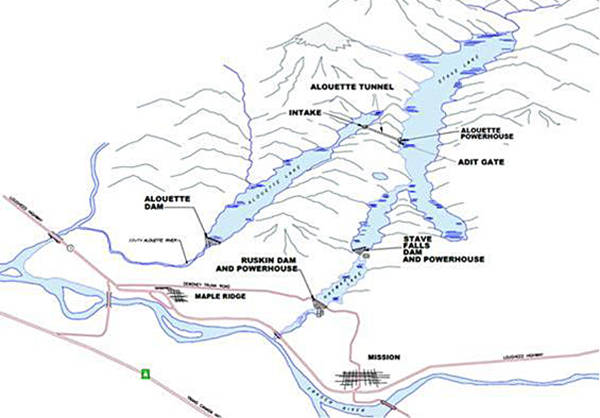