Ontario has joined Michigan’s health department with a warning against eating smelts from Lake Superior.

Doyon was experiencing a multitude of symptoms affecting both his physical and mental state.

“Extreme muscle weakness, muscle fatigue. I was walking around like I was drunk all the time, my gait was off. I was stumbling a lot all over the place. I was moody all the time, I couldn’t focus. Lethargic, tired, cold,” he said.

Doyon was diagnosed with mercury poisoning last year after undergoing almost every sort of test imaginable beginning in December 2019. Prior to the diagnosis, the tournament angler would eat fish up to four times a week.

The Sault-based tournament angler has been researching Ontario’s guidelines for fish consumption ever since.

Doyon has undergone 15 rounds of chelation therapy to remove the toxic mercury from his body, since May 2020.

Toxins in fish are subject “food pyramids,” in which toxins bioaccumulate in higher and higher concentrations, the higher you go in the food pyramid.

Therefore, it follows that large “apex predators” at the top of the food pyramids would have the highest concentrations of toxins.

Man is at the apex.

Therefore, do not eat large fish.

This is not new and goes back to the discovery of Minimata disease.

Minamata disease, is a neurological disease caused by mercury poisoning.  Signs and symptoms include ataxia, numbness in the hands and feet, general muscle weakness, loss of peripheral vision, and damage to hearing and speech.  In extreme cases, insanity, paralysis, coma, and death follow within weeks of the onset of symptoms.  A congenital form of the disease can also affect fetuses in the womb.

Minamata disease, discovered in the city of Minamata, Japan, in 1956, was caused by the release of mercury in the industrial wastewater from a chemical factory.

This highly toxic heavy metal bioaccumulated and biomagnified in shellfish and fish, which, when eaten by the local population, resulted in mercury poisoning.

rassy Narrows First Nation is an Ojibwe First Nations band in northern Kenora that fell victim to mercury poisoning from the Dryden Chemical Company and the Dryden Pulp and Paper Company.  10 tons (20,000 pounds) of mercury was dumped into the Wabigoon River system between 1962 and 1970.

Despite the fact that walleye in the area contain approximately 13-15 times the recommended levels of mercury, the First Nation group still consumes the mercury-infested fish, due to cultural tradition and socioeconomic factors.

What is new and alarming in the recent reports is the contamination of smelts. They are close to the bottom of food pyramids and all predators eat them given the opportunity.

In the case of smelts in Michigan, the toxins are the “forever chemicals,” PFOS and PFAS, not mercury.

It is very disturbing that this much PFOS & PFAS is in Lake  Superior.

Jason Doyon was mercury-poisoned, almost with certainty, by consuming many larger fish. Large walleye, in particular, can be heavily contaminated by mercury.

Our MNR should be loud and clear about this matter.

Accurate consumption guides are urgent and should be much more readily available than through internet research.

According to Ontario’s guidelines the province recommends that absolutely no smelts from Lake Superior, from the upper portion of the St. Mary’s River all the way up to Batchewana Bay, should be consumed by the public.

The public should study the province’s online guide to eating fish before consuming ANY fish from Lake Superior, the North Channel and inland lakes.

The issue extends to the commercial fishing industry.

Doyon points out that the areas on the province’s interactive map  run from the Soo Locks all the way to Georgian Bay east of Manitoulin Island, advising zero consumption for any whitefish over 22 inches.

Which means that the public could be ingesting fish from a restaurant or grocery store with high levels of mercury contamination without even realizing it.

The following is a list of water bodies in the Algoma District compiled by Doyon that currently have zero consumption advisories, according to provincial data:

An extended list of consumption guidelines for the Algoma District complied by Doyon can be found on the Algoma Fish and Game Club Facebook page as well as an online Interactive Guide to Eating Ontario Fishavailable from the province.

The major source of mercury in Lake Superior is from gold mining. Red Pine Exploration has discovered a new gold zone at its Wawa Gold Project, two kilometres southeast of town. The Island Gold Mine, 15 kilometres east of Dubreuilville, 83 kilometres northeast of Wawa, has ramped back up. The Eagle River Complex, located 50 kilometres due west of Wawa, consists of two operating gold mines, the Eagle River Underground Mine and the Mishi Open Pit Mine.

Gold mining has ravaged landscapes, contaminated water supplies, and contributed to the destruction of vital ecosystems.

Most gold is “Dirty Gold”, really, really dirty. There is no such thing as clean gold, unless it’s recycled or vintage. Modern industrial gold mining destroys ecosystems and creates huge amounts of toxic waste.

Due to the use of dirty practices such as open pit mining and cyanide heap leaching, mining companies generate about 20 tons of toxic waste for every 0.333-ounce gold ring. The waste, usually a gray liquid sludge, is laden with deadly cyanide and toxic heavy metals, mercury, lead and cadmium.

The use of mercury in gold mining is causing a global health and environmental crisis.

When mercury reaches rivers, lakes, and oceans, it can travel across great distances. Once it reaches a resting place, mercury is not easily removed.

Sediments on the floor of San Francisco Bay remain contaminated with mercury left by the California gold rush of the 19th century.

Mercury causes neurological damage, the effects most pronounced in children who are still developing, the damage including cognitive damage and low IQ, slow reflexes, impaired coordination, damaged motor skills, problems with memory and concentration and symptoms of ADHD.

Companies mining for gold and other metals dump at least 200 million tons of toxic waste into rivers, lakes, and oceans each year—more than 1.5 times the waste that U.S. cities send to landfills on a yearly basis.

To limit the environmental damage, mines often construct dams and keep the toxic waste inside. But these dams do not prevent contamination of the surrounding environment. Toxic waste easily seeps into soil and groundwater, or is released in catastrophic spills.

The majority of the world’s gold is extracted from open pit mines, where huge volumes of earth are scoured away and processed for trace elements. To produce enough raw gold to make a single ring, 20 tons of rock and soil are dislodged and discarded. Much of this waste carries with it mercury and cyanide, which are used to extract the gold from the rock.

The resulting erosion clogs streams and rivers and the mercury and cyanide eventually ends up in marine ecosystems far downstream of the mine site.

In the case of Wawa, this means Lake Superior and the Great Lakes.

Short-term profit for long-term loss – something for everyone in the Great Lakes basin, not just Wawa, to ponder. 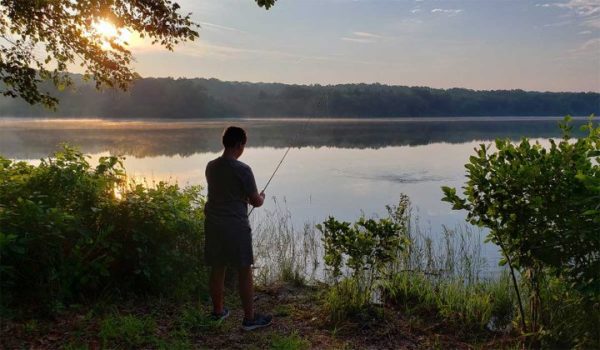