The Minnesota Department of Natural Resources is conducting an immediate response to the capture of 51 invasive carp on the Mississippi River. The invasive carp were caught by two commercial fishing operators near La Crosse and Trempealeau, Wisconsin, during routine spring netting last weekend.

In response to this discovery, the DNR is working with the U.S. Fish and Wildlife Service, the U.S. Geological Survey, the Wisconsin DNR and commercial fishing operators to conduct large-scale netting, studies of the captured carp and increased monitoring.

“This robust response will provide additional information about the population while removing any other invasive carp they happen to catch,” said DNR invasive species unit supervisor Heidi Wolf.

When the commercial fishing operator operating near La Crosse saw what he thought were invasive carp, he contacted the DNR. The DNR invasive carp field crew assisted in removing and identifying the fish. The DNR identified 39 silver carp and 11 grass carp caught in Pool 8 of the Mississippi, just south of La Crosse, and one silver carp caught in Pool 6, about 20 miles farther upstream. All invasive carp recovered have been given to the U.S. Fish and Wildlife Service to determine their age, size and gender.

“The location where these fish were caught is commonly netted because of concentrations of commercially valuable fish,” said DNR invasive carp field lead Ben Larson. “This is the largest congregation of invasive carp we’ve seen this far upstream.”

Invasive carp have been progressing upstream since escaping into the Mississippi River in Arkansas in the 1970s. These large fish compete with native species and pose a threat to rivers and lakes. No breeding populations have been detected in Minnesota waters to date. Individual invasive carp have been caught as far upstream as Pool 2 of the Mississippi, near the Twin Cities (bighead, grass, and silver), the King Power Plant on the St. Croix River by Oak Park Heights (bighead), and just downstream of Granite Falls in the Minnesota River (bighead).

Previous captures of invasive carp in Minnesota have been individuals or small numbers of fish. This capture indicates an increase in the abundance of invasive carp in the Pool 8 portion of the river between Minnesota and Wisconsin, and is very likely related to the prolonged high water conditions on the Mississippi River during the summer of 2019. During high water, gates at the locks and dams on the river are kept open to pass flood waters. These “open river” conditions allow easier upstream movement of fish from downstream portions of the river, where invasive carp densities are higher.

The DNR has built partnerships with state and federal agencies, conservation groups, university researchers and commercial businesses to prevent the spread of invasive carp. The 2015 closure of the Mississippi River lock at Upper St. Anthony Falls in Minneapolis was a major accomplishment of these efforts.

The DNR is actively engaged with several prevention efforts:

In partnership with the DNR, the Minnesota Aquatic Invasive Species Research Center (MAISRC) at the University of Minnesota is testing and evaluating carp deterrents in Mississippi River locks and dams. Previously, MAISRC installed and evaluated a speaker system at Lock 8. Development of this technology will continue this year with the installation of an updated speaker system at this location.

The DNR’s Fish and Wildlife Division leads a program to monitor fish population changes and impacts of management actions. This includes maintaining important relationships with commercial fishing operators, as demonstrated in this instance.

Invasive carp captures must be reported to the DNR immediately. Call 651-587-2781 or email invasivecarp.dnr@state.mn.us. 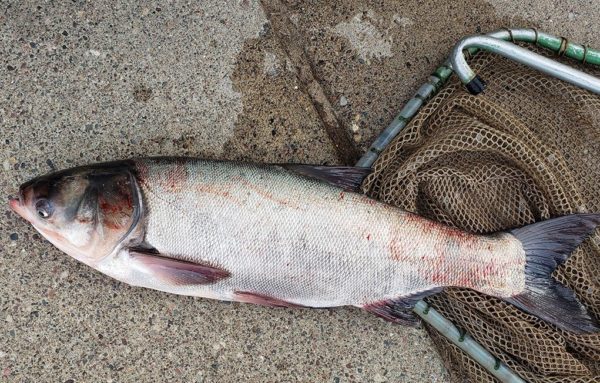 This entry was posted on Tuesday, March 24th, 2020 at 10:00 am and is filed under News. You can follow any responses to this entry through the RSS 2.0 feed. Both comments and pings are currently closed.